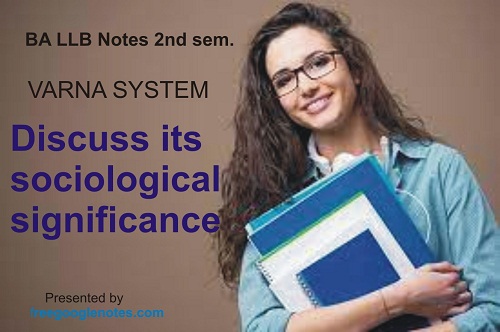 In Nirukta, Shri Yaskacharya evolved the word ‘Varna’ from the root ‘Vri’ giving the meaning of choice or Varana. In this way, Varna is that which person chooses according to this nature and his work. Varna has been for ‘colour’. Originally, according to Sri Panduranga Vamana Kane the world varna was applied to white complexioned (gaura varna) Aryans and black complexioned slaves are servants. In a latter stage, the word came to be used for the four social classes i.e. brahmana, Kshatriya, vaisya and shudra. The French scholar Senart has followed the same opinion.

The aim of the four varna system in India was a division of labour, similar to the division of labour of Plato and Wells. The theory of division of labour is one of the fundamental theories of social organisation. It propounds that for orderly progress work in society it is necessary that it be divided into classes, according to natural tendencies. Dr Bhagwan Das has divided labour under the Indian varna system into the following classes-
(1) Teacher class,
(2) governing class,
(3) business class,
(4) physical labourer class.
These are respectively the Brahmans, the Kshatriyas, the Vaishyas and the Shudras. Thus the responsibility of the Brahmanas was to see the proper execution of academic work like the study of knowledge and teaching and other religious activities. The government of the state, defence and administration were left to the Kshatriyas while the vaishyas carried on the agriculture, dairy farming and business. The Shudras served the other varnas. As has been said earlier, this class division is not peculiar to India, it has been the common feature of all the organised societies of the world.

Division of functions according to traits

While speaking on this subject, this is what Sri Krishna said of the varna system in the Gita-चातुर्वणर्य  मया सृष्टम गुण कर्म विभागश  ; meaning that I am the one who has created the four varnas according to nature and function. In this way in the varna system, the division of labour has Deen effected on the basis of inherent qualities and mental tendencies.

Indians have accepted four tendencies common on man : satvika, Satvika-rajasika, rajasika-tamasika and tamasika. The division of the varna system has been made on the basis of these tendencies. The Brahmanas were of the satvika nature, Kshatriyas of the satvika-rajasika, vaisays of the rajasika-tamasika and shudras of the tamasika. Thus, originally in the varna system, greater performance was given to nature and tendency than to birth. It is said in the Atharva Veda- “न दासो नार्यो महित्वा व्रतं मिमाय” meaning that I do not take a man to be, a slave or Arya from his birth, I evaluate him from his traits. In the Hindu Dharmashastras, it is said- “जन्मना जायते शूद्र: संस्काराद दिव्ज उच्यते” meaning that everyone is a shudra at birth, becoming a Dwija only after sanskaras like upanayana et. Being fundamentally based upon quality and tendency does not mean that the theory of varna system utterly disregarded the influence of heredity. Actually, this theory makes heredity a part of the environment. Generally, the children are expected to adopt the same varna as is of their parents. The question of traits and tendencies arises only when some departure from hereditary class in the present tendencies is exhibited.

The varna system is a developed system. Sociał stratification is found in all societies but it is difficult to find one as systematic as the Indian varna system. The object of this system is to put the different powers of man to proper and productive uses in order to maintain the solid, organised and balanced state of society. The Indians scholars, like Plato of Grecce, gave the highest position in society to Brahmanas, expert in the field of thought and spirit. The second place was given to the protectors, the Kshatriyas and the third to the producers, the Vaishyas with the servants of society in the fourth place. People unable to perform any expert activity were also included in the shudra class. In the varna system, the higher classes get special rights and prerogatives but special responsibility corresponding to their authority is also attached to it. This is clear from the arrangement for punishments made by the penal authorities. According to Manu, the retribution made for theft should be of the value of eight times in the case of Shudra, 16 times if the person is Vaishya, 32 times if a Kshatriya and 64 or 100 times if a Brahamana.

Another major advantage of the varna system is the decentralisation of power. The concentration of all powers of society in the hands of one class may lead to exploitation and despotism. In the varna system the power of shastra of power of knowledge, power of arms, power of wealth and power of labour, were evenly distributed among the brahmans, the Kshatriyas, the vaishyas and the Shudras respectively. In this way, society was made safe Irom thc CVil rCsults of centralisation. The rewards of their work differed. The brahamanas were rewarded in the form of respcct, the Kshatriyas in the form of authority, the vaishyas in wcalth and the shudras in leisurc etc. Thus, by keeping respect, authority and wealth separate, the society was saved from the present-day defects of centralisation or localisation of power.

In this way, the varna system shows a fine synthesis of the fundamentals of social organisation, division of labour, decentralisation and the correct position of the different values. The convention was not serve and being based on inherent traits and tendencies, it was the same time, quite psychological too. But as a later stage, it became rigid system and lost its good qualities.