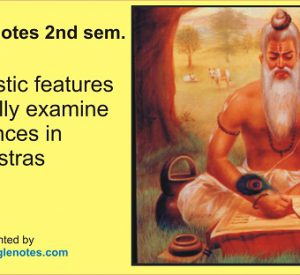 Varna and Caste are two different concepts that are erroneously considered synonymous.

Describe their characteristic features and critically examine the references in Hindu shastras in this connection.(BA  LLB NOTES)

(1) Literal Distinction. Caste and Varna are completely different from each other. The difference in their literal meaning shows this. ‘Jati’ is evolved from a Sanskrit root ‘jaha’ meaning ‘to be born’. Thus caste means birth. On the other hand, Varna means to select or choose. In this way, caste is determined at birth whereas varna is acquired by a person according to his nature.

(2) Caste is a fundamental of birth, varna a fundamental of action. Thus, caste is based upon birth while varna is on the action. In the case system, an uneducated Brahmana is respected while educated. shudra is looked down upon. In the varna system, more emphasis is laid on action than on birth. A Brahmana is respected under the varna system only if he has acquired knowledge and imparts it to others. In the ‘History of Dharma Shastra,’ Sri P. V. Kane writes that the idea of varna mainly lays emphasis on the ethical and intellectual capabilities of man. In the caste system, special importance is given to birth rights and respect enjoyed on their account.

(3) Varna system is flexible and caste a rigid one.
The varna system was a flexible and changing system. There are many examples of change in varna, and inter-varna marriages, during and even after the Vedic period. The Kshatriya Vishvamitra became a brahmana on the Basis of his penance, Parashurama was brahmana by birth, and Kshatriya by action. The same thing happened to Indira. In the Mahabharata, there is a mention of Devapi, Sindhudip, and vithavya becoming Brahmans, and there are similar instances in the Bhagwat Purana. In the Padma Purana, we have a mention of low-born Vyas and vaisya Vashistha becoming Brahmanas. There are numerous examples of inter-varna marriages in the Mahabharta. Kshatriya King Yayati married the Brahmana Devayani while Dushyant married Shakuntala. Although Shantanu was a Kshatriya, he married low-born Satyavati. The caste system forbids marriage among different castes, each caste considering marriage right if these are in the same caste itself.

(4) Numbers of Varna and Caste. There is a vast difference in the number of varnas and castes. Varnas are four. In the tenth Mandal of the Rig Veda, we find meaning that the brahmana does the work of the mouth in giving knowledge, the Kshatriya is compatible with the arms because he defends society, the vaishya work like the legs in the production and distribution of wealth while the shudra serves society like the feet. Thus, there were four varnas. On the other hand, Rose
has put the number of castes at 400, on the authority of census reports.

Rizley, Ketkar, Hutton, and Ghurye have named the following characteristics of caste-
(i) It is fundamentally in birth. ts membership cannot be assumed through any other medium.
(ii) Members cannot marry outside their own caste
(iii) In most cases mutual exchange of foodstuffs is restricted to the caste.
(iv) The conduct of most castes is determined.

(v) The castes believe their origin to be in some first person or Good.
(vi) Almost all castes have their own laws the infringement of which leads to expulsion from the caste.