What are scheduled tribes: the official policy towards them and their difficulties. 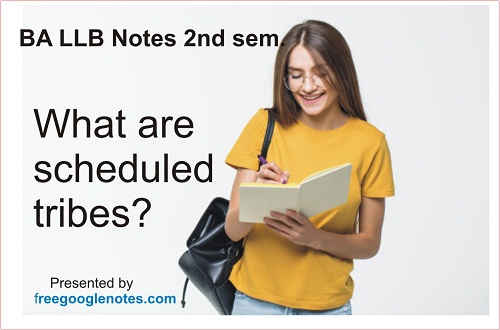 What are scheduled tribes: the official policy towards them and their difficulties.

What are scheduled tribes? What is the official policy towards them? Discuss their difficulties.(BA LLB)

What are Scheduled Tribes

Scheduled tribal groups are presumed to form the oldest ethnological sector of the national population. In the national language, such groups are referred to as Adivasis (adi-original, van-inhabitant). However, a scientific and standard definition for the identification of tribal groups has not so far been evolved. This is because different and sometimes contradictory criteria, such as the color of the skin, social organization, religion, customs language, and habitat, tend to be adopted by administrators, lawyers arid social scientists as the basis for their definitions.

As indicated earlier, there is no generally accepted definition for the identification of tribal communities. The Constitution does not also indicate any criterion for distinguishing a tribe or a tribal community from other communities. In view of the reservation of seats in parliament and legislatures, inclusion or exclusion of numerically large tribal communities has political implications. The state-wise lists of Scheduled Tribes prescribed under the Constitution have been evolved from the list of “primitive tribes” prepared at the 1931 Census, the list of “Backward Tribes” adopted under the Government of India Act, 1935, and the views expressed by the State Government. The list of Scheduled Tribes notified in 1950 were revised in 1956 by acts of parliament, to accommodate recommendations made by the Backward Classes Commission and the territorial changes following the reorganization of States. Thus even though the list may strictly not be based on scientific and uniform criteria, they have been evolved over a period of time and may be said to be adequately representative of the tribes of India, for administrative purposes.

The Backward Classes Commission referred to the matter in its questionnaire on criteria, in the following terms-

“The Scheduled Tribes can be generally ascertained by the fact that they live apart in the hills, and even where they live on the plains, they lead a separate excluded existence and are not fully assimilated in the main body of the people. Scheduled Tribes may belong to any religion. They are listed as Scheduled Tribes because of the kind of life led by them”.

Early in the year 1947, prior to the attainment of independence, one of the advisory committees of the Constituent Assembly appointed two sub-committees, one to report on the “tribal” and “excluded” areas of the north-cast frontier (Assam), and the other to report on the excluded” and “partially excluded” areas other than Assam. The reports of these sub-committees from the basis for the special provision incorporated in the Constitution of India for the welfare of Scheduled Tribes. The Constitution had adopted as one of the Directive Principles of State Policy, a twin formula-development with “special area” of the educational and economic interests of the Scheduled Tribes on the one hand, and protection from all forms of exploitation on the other. Article 244 of the Constitution places on Governors of States a special responsibility for improving the level of administration in the “Scheduled Areas”- isolated and underdeveloped pockets with a concentration of tribal population. Financial assistance to the States for attaining these objectives is assured under Article, 275.

To afford protection against exploitation, the Constitution arms Governors of States with powers to make special laws for controlling, inter alia, transfers of land and money lending in the Scheduled Areas. Under Article 338, a special officer the commissioner for Scheduled Castes and Scheduled Tribes is required to investigate and report periodically to the President on the working of the safeguards provided in the Constitution for the Scheduled Tribes, such as reservation of seats in Parliament and State Legislatures, and reservation of posts in public services.

The Constitution accords to Nagaland, the North-East Frontier Agency urea, and the hill districts of Assam a special measure of autonomy; this is because of the special socio-economic features of the Assam Hills and Frontier Tracts, as pointed out by the sub-committee referred to earlier.

Since 1958, however, policies towards the tribes and the approach to tribal welfare have been reviewed by a number of statutory and official groups. There is a broad consensus of opinion that while the rest of the population of the country marches forward, the tribes and tribal areas cannot remain in isolation. The living standards of the tribes have to be raised to the level of the rest of the Indian community, in this process, the tribes should be enabled to develop along the lines of their own genius, and their traditional arts and culture should not be disturbed. Administration and development of tribal areas should as far as possible, be made over to trained teams of their own people. A reference to these facts of policy was made by the first Prime Minister of India; Shri Jawahar Lal Nehru, in his foreword to the book “A Philosophy for NEFA” by the late Dr. Verrier Elwin. These ideas were incorporated in the Third Five Year Plan.

(i) Study Term on Social Wclfarc and Welfare of Backward Classes appointed, by the Committee on Plan Projects (Planning Commission, 1958-59);
(ii) Committee on Special Multipurpose Tribal Blocks appointed by the Ministry of Home Affairs (1959-60);
(iii) Scheduled Areas and Scheduled Tribes Commission appointed under Article 3439 of the Constitution (1960-61); and
(iv) Special Working Group on Co-operation for Backward Classes (1961-62).

(i) the need for a properly oriented approach to the tribes;
(ii) extension of tribal development blocks in all areas where the concentration of tribal population exceeds 50 percent by the end of the Fourth Plan;
(iii) early adoption of protective legislation;
(iv) reinforcement and unification of the administrative set-up;
(v) encouragement to voluntary agencies; and

(vi) creation of a new type of multi-purpose co-operative institution in tribal areas, with emphasis on the marketing of forest produce.

The main cause for the relative backwardness of the Scheduled Tribes is their environment. Prior to independence, no positive steps have been taken for promoting their social and economic welfare and the administrative system failed to take into account the special needs of tribal communities. Their main sources of livelihood are agriculture and forest produce. Poor and eroded soil, primitive methods of cultivation, and vagaries of the weather result in low agricultural returns. Forests have been gradually denuded; in the extraction and marketing of forest produce, tribals are often exploited by contractors and traders.