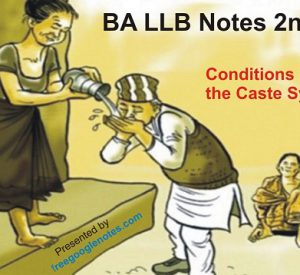 Discuss the conditions favouring the caste system in India.

Discuss the conditions favouring the caste system in India.(BA LLB)

(1) Geographical Condition. Geographical isolation has a large part to play in rendering a society static and powerless. The absence of adequate means of transport leads to geographical isolation, from others, people who inhabit distantly situated areas and this fosters old customs, mores, traditions and superpositions, all of which encourage the caste system.

(2) Static Society. Hindu society is a static society. There has never been any stupendous variation in its political situations and economic conditions. Its social mores, customs and traditions have failed to over the age as times have marched along. But this does not mean That Hindu society does not change at all. To say that it is static or motionless is only to indicate the extremely slow rate at which variations and modifications are instituted in it. Generally speaking, the caste system was at a job ebb in the society. In this way, the static nature of society is a condition favourable to the continued existence of the caste system.

(3) Foreign Aggression. A further contribution to the desirability and utility of the caste system was made by foreign aggression. Many scholars hold that the caste system started in India when the Aryans invaded the country. The Aryans were fair-skinned and victors. The natives of India were black-skinned and the victims. Hence, two castes were formed in India. The victorious race considered itself superior to the victimised race and considered it below its dignity to associate itself and to marry into the latter. In this way, strict laws regarding conduct, diet, marriage, etc., were formulated. These were the fundamental constituents of the caste system.

(4) Rural Social Structure. The rural social structure is usually unchanging and static. Ancient traditions are better respected in it. As the rural structure weakens, or in other words, as urbanization in the country increases, the caste also becomes progressively weaker.

(5) Influence of Religion. The influence of religion is the most important factor contributing to the continuation of the caste system. The Hindu caste system is looked upon as a divines institution. People who violate it are considered sinners and it is believed that God will punish them. Due to this reason, people do not have the courage to violate the laws of the caste system.

(6) Difference of Race. The existence of many races in the country leads to the formulation of many strict laws concerning discrimination sincere each race endeavoured to maintain its purity. In the medieval period of Indian history, stringent laws concerning caste were laid down the protect Hindi society from Muslims.

(7) Lack of Education. Lack of education occupies an important position among the factors which have encouraged the existence of the caste system in Hindu society. An uneducated society is static and motionless. Superstitions, traditions and mores breed freely among uneducated people. In this way lack of education is a condition that particularly favours the system.

(1) Modern Education. A major part in weakening the caste system is played by the existing education. Modern education is negative as regards religion. It emphasizes democratic values such as liberty, equality and fraternity. Modern education bears the stamp of scientific and independent thinking in the West. It has laid great stress upon the importance of man. Thus the progress of modern education is demolishing proportionately the ties of caste, etc. Education has encouraged intercaste mixing. The feeling of superiority and untouchability are being gradually eliminated from the minds of children of all castes who study, in the same school.

(2) Industrialization. Industrialization also has led to a decrease in the intensity of caste favour because persons from all castes sought and obtained employment in factories. According to A. W. Green, although the brahmin has to take a prolonged religious bath in order to purify himself against the defilement caused by the mere shadow of a sudra, yet it is not possible to avoid the shadow of sudra in the crowded lanes of the city and busy offices. As a result of industrialization individuals of all castes came into mutual contact into factories, hotels, markets, trains, trams ànd buses etc., and the observance of laws concerning touch ability became impossible.

(3) Increase in the importance of wealth. In the modern age, wealth is replacing caste as the basis of social prestige. Nowadays a person adopts that occupation which appears to him to be the most profitable. The consideration in the choice of a profession is no longer caste but individual capability and the facility in earning wealth. A wealthy sudra is more respected than a poor brahmin. For this reason, the ties of the caste are being loosened in the frantic race after wealth.

(5) Means of communication. Means of communication developed along with the progress of industrialisation. This put an end to geographical isolation and the thoughts, customs, etc., of various places, influenced each other. It became difficult to maintain the rigidity of caste in the whirlwind of communication set into motion by industrialisation through such means buses, trains, trams, cars, etc. In this connection Risley has written in “People of India” that on a platform where the train halts momentarily one does not enquire the caste of the seller when purchasing something from him.

(6) Political Agitation. To end the discriminatory practices on the basis of the caste system was a part of the aims of the national agitation for a political awakening of the people of India. The objective of this national movement was the establishment of a democratic pattern of society in India. For this reason, it made efforts to weaken the caste consciousness in the people.

(7) New Legal Machinery. In the new legal machinery of the British Government, castes were similarly punished for the same offences. The establishment of judicial courts deprived the caste panchayats of their power and they no longer retained the authority to punish a criminal. In this way the restrictions upon the opponents of the caste system were removed and gradually its laws also lost their meaning and significance.

(9) Independence of India. The most severe shock to the caste system was the country’s gaining freedom and independence Para 15 (2) of the constitution of Independent India declared all citizens equal. The fortress of the caste system collapsed when foreign rule came to an end. According to the untouchability Crime Act of 1955, it is a crime to prevent any one from using a public place. The respect once accorded to the caste system dwindled through the influence of the means of transport, educational facilities, industrialization, the democratic method of Government etc.

In spite of the presence of so many unfavourable circumstances the caste system continues to exist in an aggravated condition in the country and at some places, it has become even more strong through being identified with political interest. To eliminate it from the country much in the way of a combined effort must be done.