Describe the main distinctive features of the caste system 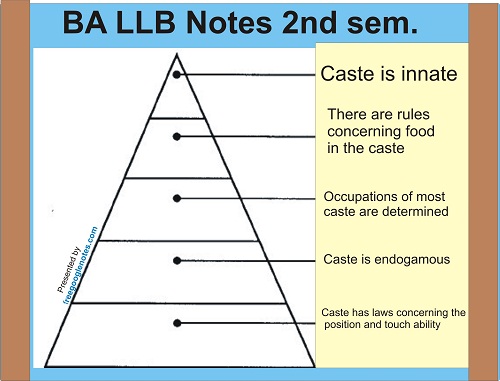 Describe the main distinctive features of the caste system.

Main Characteristics of the Caste System

In defining caste J. H. Hutton, N. K. Dutt and G. S. Ghurye have described its various aspects. The following are the main characteristics of the caste system-

(1) Caste is innate. The membership of caste is determined by birth. A person remains the member of the caste into which he is born and his membership does not undergo any change even if changes in his status occupation, education, wealth, etc., take place.

(2) There are rules concerning food in the caste. Each individual’s caste has its own laws which govern the food habits of its members. Generally, there are no restrictions against fruit, milk, butter, dry fruit, etc., but kachcha food (bread, etc.) can be accepted only from a member of one’s own or a higher caste.

(3) Occupations of most caste are determined. In the texts of the Hindu religion, the occupations of all varnas were determined. According to Manu functions of the Brahmin, Kshatriya, Vaishyas, and the Sudra were definite. The function of the brahmin is to study, to teach, to guide, and to perform religious rituals, give and receive alms: that of Kshatriya is to study, perform religious rituals, give alms, punish the evil and go to war; that of vaishya is to study, perform the religious ritual, give alms, work in agriculture, trade and animal husbandry; that of the sudra is to do menial work for all the other varnas. Having developed from the varna system the occupations in the caste system are definite. In Hindu society even today in most cases the son of a blacksmith pursues the occupation of his father, the son of a carpenter becomes a carpenter while the son of a shoemaker becomes a shoemaker.

(4) Caste is endogamous. The members of each of the many castes marry only within their own caste. Brahmin, Kshatriya, vaishya, and sudra all marry within their respective castes. Westermarck considers this to be the chief characteristic of the caste. Hindu society does not sanctify inter-caste marriage even now.

(5) Caste has laws concerning the position and touch ability. The various castes in the Hindu social organization are divided into a hierarchy of ascent and descent one above the other. In this hierarchy, the brahmins have the highest and the untouchables the lowest position. To the sense of superiority is also conjoined the law of untouchability. The feeling of superiority is much exaggerated and manifest in the South. The very touch and sometimes even the shadow of the members of the lower caste are enough to defile an individual of high caste. In Kerala, a namboodiris brahmin is defiled by the touch of a Nayar, but in the case of a member of the Thiya caste a distance of 36 feet must be kept avoiding being defiled and in the case of members of the Pulayan caste the distance must ninety-six feet. The stringent observation of the system of untouchability has resulted in some low castes of the Hindu society being called untouchables who were consequently forbidden to make use of places of worship, cremation grounds, colleges, public roads, and hostels, etc., were disallowed living in the cities.