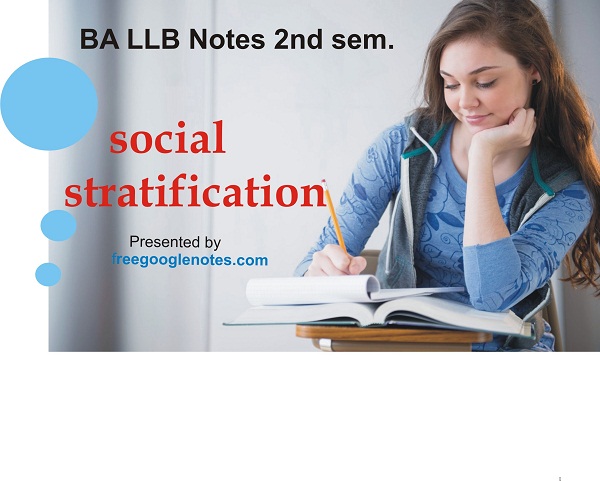 Define ‘social stratification’ and critically examine the view that Marx has “oversimplified the structure of stratification by reducing it to one factor, control of the means of production.”

According to Karl Marx, “The history of all hitherto existing societies is the history of class struggle.” The class struggle arises due to the division of society into classes having opposite interests. Each class supports a particular class consciousness giving rise to class conflict in classes having opposite interests. In modern, times Marx Weber has also presented a significant theory of stratification. Pointing out intimate relationships between classes, status groups, and parties, he said, “Parties may represent interests determined through ‘class situation’ or ‘status situation’ and they may recruit their following respectively, from one or the other. But they need be neither purely ‘class’ not purely ‘status’ parties, and frequently they are neither.”

Today the study of stratification has assumed a central place in sociology. The study of the sources, patterns, and consequences of social inequalities has become a dominant pursuit of sociologist and is likely to continue to enjoy widespread attention so long as inequalities persist, and so long as they are consequential for the life chances and life patterns of the different strata that make up any society. According to Melvin M. Tumin, the characteristics of social stratification are as follows:

1. It is social i.e., patterned, in character.
2. It is ancient, i.e., it has been found in all societies.
3. It ubiquitous.
4. It is divine in its forms.
5. It is consequential, i.e., the most important, most desired, and often scariest things in human life constitute the basic materials that are distributed unequally.

If systems of stratification are ancient, universal, and basically alike in their main features, there must be some common social process that brings such systems into being shape them and maintain them. Four such processes can be identified:
(1) differentiation,
(2) ranking
(3) evolution, and
(4) rewarding.

On the basis of these four characteristics of the stratification process, we can distinguish between social classes like Indian caste and economic classes as found in western societies. Of these, while caste is based on close stratification, class is an example of open stratification which means that it is possible for a person to go from lower to higher and vice-versa in the social ladder. Each social stratification exhibits a hierarchy of social status with corresponding lower and higher social roles. Class consciousness leads to a lot of impediments to social cohesion. The members of each class tend to Safeguard their own interests. It is undeniable that some sort of social stratification is almost universal but it is wrong to assume that social classes are found in their pure form anywhere. With the growing means of transport and communication these days, the barriers of classes are being broken. There is hardly any restriction on vertical or horizontal transfer from one class to another. Therefore, class distinctions are not rigid, they are changing. Different classes are breaking and giving place to new classes. Thus the study of social classes should be conducted in the general context of the study of social mobility. The study of stratification, however, faces several problems. It has become more difficult in modern industrialized western societies. However social stratification is the subject of active discussion almost everywhere. To conclude in the words of Tumin, “In short there are many more possible ways to organize societies and to motivate people to conscientious use of their talents. If a man seeks forever effective ways to maximize his social yield, not to mention his personal gratifications, it might very well pay him to examine those alternative possibilities.