Critically discuss various theories of the origin of the Caste System 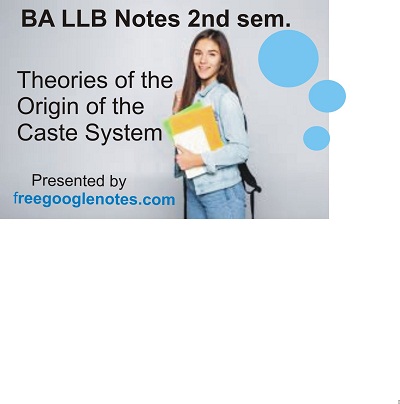 Critically discuss various theories of the origin of the Caste System.

Theories of the Origin of the Caste System

Critically discuss various theories of the origin of the Caste System.

Theories of the Origin of the Caste System

1. Political Theory- According to the Political Theory of caste the caste system in the Brahmin progeny of Indo-Aryan culture developed in the Gangetic plain and spread from there throughout the country. According to Prof. G.S. Ghurye, this theory was invented due to the political interest of the Brahmins. In his own words, “I may conclude that caste in India is a Brahmanic child of the Indo-Aryan culture, cradled in the land of the Ganga and the Yamuna and thence transferred to other parts of the country.” Political theory was propounded first of all by the French priest Abbe Dubois in the twelfth century A.D. In his work Hindu Manners and Customs Abbe Dubois called caste the scheming of the Brahmins. Denzil Ibbetson has supported Abbe Dubois in pointing out that in the caste system the occupations held by the Brahmins and Kshatriya have been considered as the best and the highest. Thus according to political theory, the caste system was invented in order to dominate the entire Hindu society by the higher castes. Against the political theory as an explanation of the origin of the caste system in India. Dr D. N. Majumdar has given the following arguments in his famous work Races and Cultures of India:
1. This Theory has neglected the racial distinction found among various social classes in India.
2. Looking at the complex Hindu social structure based upon caste, it appears impossible that the aim of the caste system would have been to maintain the dominance of the Brahmin priests over Hindu Society.

3. Economic or Occupational Theory- Explaining the origin of caste system in India, Nesfield has said, “Function and function alone is responsible for the origin of caste system” The ancient traditions of the Hindu support this theory. In Bhagwatgita Sri Krishna has pointed out that the fourfold varna system has been created by God himself In Buddhist literature there is a mention of so many castes according to occupational distinction, busy in various crafts and industries. It is a fact that the occupations of most of the castes in Hindu society were fixed. The words Lohar, Sunar, Chamar, Julaha etc. signify the economic occupations of these castes. However, the economic or occupational theory about the origin of the caste system in India suffers from the following defects:

(i) It does not Explain the Hierarchy in Caste System- Occupational theory does not explain why some castes are considered higher than other castes. The function of a Lohar or a Chamar is as Vital for the society as that of any caste and yet why these castes are considered as lower castes. In South India, even the cultivators are held to belong to a lower caste, while their function is definitely most important to society. Thus no one can deny the political intrigue of the higher castes to maintain their hold on Hindu Society through the caste system.

(ii) Why all the Farmers do not Belong to One Caste- About 67% of Hindus are busy in agriculture. These farmers, however, come from all the castes. If the occupational theory were true then they should belong to one caste on the basis of economic occupation. This, however, is not so. In India, there are not as many occupations as there are castes which number up to thousands. Thus Prof. D. N. Majumdar has rightly pointed out that though the function had been the basis of social stratification in ancient India, it cannot properly and completely explain the Hindu social structure based upon the caste system.

(iii) It Neglects Racial Elements- The occupational theory does not accept any distinctions between castes on the basis of race. This, however, has been proved wrong by modern discoveries.

5. Ethnic Theory- Some scholars have propounded ethnic theory about the origin of the caste system. According to this theory, castes are ethnic groups. Risley pointed out that the Aryans gave a lower place in society to the Dravidians. This was because the nasal structure of the Dravidians was different from that of the Aryans. The groups resembling the nasal structure of the former were therefore labelled as lower castes. According to Prof. G. S. Ghurye, the caste system was a clever scheme of the Brahmins to maintain their hold on Hindu Society. According to D. N. Majumdar, the aim of the caste system was to maintain the purity of blood. To quote his word,” Nesfield said that superiority or inferiority of occupation is represented in the hierarchy of the caste depends upon the degree of purity of blood and the extent of isolation maintained by the social groups.” N. K. Dutta also agrees with Risley on this point. However, J. H. Hutton has criticised the ethnic theory about the origin of the caste system on the following points:

(i) Why did Ethnic distinction not create a caste system among Muslims and Christians?
(ii) Though Ethnic distinctions are found in most of the countries of the world, the caste system is peculiar in India-Why?
(iii) This principle does not explain untouchability.
(iv) This theory does not explain how various castes originated from races?
(v)This theory is disproved by facts. In the census report of 1931 by Dr Guha in India, the Nayars of Malabar, the Pathans of North-West Frontier province and the Brahmins of Bengal have the same caste. Such examples can be multiplied.

6. Theory of Mana- According to J. H. Hutton, the caste system originated in the religious customs and rituals of the non-Aryan groups, particularly the theory of Mana. Mana is a mystic power. According to Hutton the traditions of endogamy, untouchability etc., have their roots in defence against the influence of mana. Criticizing this theory of the origin of the caste system, D. N. Majumdar has pointed out that it is absolutely controversial as to what role may be assigned to Mana in the origin of the caste system. This theory does not explain that whereas belief in Mana is found among most of the primitive tribes all over the world, why did it create a caste system in India?

8. Religious Theory- Hocart and Senart, two scholars have advanced what is known as the religious theory of the origin of the caste system. According to Hocart the division of labour in Indian society has been based upon religious principles and customs since in ancient India Dharma occupied the most important place. The king was considered the representative of God. The administrative system, therefore, drew its authority from divine power. Therefore, the religious priests were given the highest status on the caste system Gradually, different social groups hardened in propounding this religious theory of the origin of the caste system. Hocart has however forgotten that the caste system in India is primarily a social institution and not a religious system. Therefore, in spite of the religious element in it, it can not be termed as a religious institution.