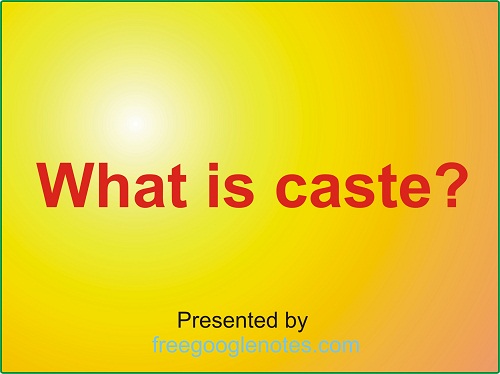 What is caste? What is the difference between caste and class?

The word ‘caste’ is used in everyday life and we use it to distinguish one person from another. We say that such and such person belongs to a particular caste. In saying it we generally mean to convey that he is born of parents or is a member of the family said to, belong to a particular caste. In this way caste is a hereditary group and in biology, the toward is used only for descent or heredity. But this definition is inadequate for the purpose of sociology since it requires a more comprehensive and clarified definition.

(1) Sir Herbert Risley- Risley has written that “A caste may be defined as a collection of families or group of families bearing a common name which usually denotes or is associated with specific occupation claiming common descent from a mythical ancestor, human or divine, professing to follow the same professional calling and are regarded by those who arc competent to’ give an opinion as forming a single and homogeneous community.”

Criticizing this definition of caste. Huton has said that it is the people of the clan who claim descent from a mythical ancestor and not members of the caste.

(2) Martindale and Monachesi- “A caste is an aggregate or persons whose share of obligations and privileges is fixed by birth sanctioned and supported by religion and magic.” This definition of the caste is incomplete since it excludes several main characteristics of the caste.

(3) Ketker- “A caste is a group having two characteristics:
(1) membership is confined to those who are born of members and includes all persons so born,
(2)the members are forbidden by inexorable social law to marry outside the group.” The two characteristics of the caste highlighted in this definition do not hold water in all cases. Now-a days members of one caste wed members of other castes. In South India, even people born outside the caste are at times included in the caste.

(4) D. N. Majumdar and T. N. Madan- “A caste is a closed group.” Expressing the same idea differently Cooley has written, “what a class is somewhat strictly hereditary, we may call it a caste” The definition is given by Maclver and Page also resembles this to some extent. According to them, “When the status is wholly predetermined so that men are born to their lot in life without any hope of changing it, then class takes the form of caste.” These definitions are important in distinguishing between caste and class, but they do not exhaustively describe caste.

(5) A. W. Green- “Caste is a system of stratification in which mobility, movement up and down the status ladder, at least ideally may not occur. A person’s ascribed status in his lifetime status. Birth determines one’s occupation, place of residence, style of life, personal associates, and the group from among whom one must find a mate. A caste system always includes the notion that physical or even some forms of social contact with lower caste people are degrading to higher caste persons. The caste system is also protected by law and sanctified by religion.” This definition of caste is more complete.

Modern thinkers consider it best to enumerate features of caste in defining it. This is what Hutton, Ghurye, and N. K. Dutt have done.

Of the predomination characteristics of caste, N. K. Dutt has mentioned the following.

(a) Members of caste cannot wed outside their own caste.
(b) There are similar but less strict laws governing the partaking of food with members of other groups.
(c) For many castes the occupations are fixed.

(d) There is some accepted stratification among the castes in which Brahmina have been accorded the best place at the top.
(e) Birth determines the caste of the individual for his entire life so long as he is not extradited from if of violating its laws. There is no other possible way of transferring from one caste to another.
(f) All occupation is based on the respect of the Brahmins. This description of the caste system by Dutt is a more comprehensive exposition but this too does not take into account the numerous variations presently taking place in the caste system. Actually, it is difficult to formulate a definite and permanent definition of caste; The most that can be done is to describe the features of the caste system in a particular context since the caste system is undergoing much modification and transformation. It would not be surprising if caste were eventually reduced to a word signifying merely a group since inter-caste marriages are increasing and the restrictions on mutual behavior, exchange of goodwill, and conduct are breaking. Some people are changing their castes on the strength of their monetary wealth, the occupations for the various castes are no longer fixed, a member of any caste takes to any profession that he desires, the Brahmins have been deprived of much or their past glory and respect, very few caste Panchayats are to be seen and even they have no control whatsoever over the members. Many people have started excluding their caste name from the name they use: In this way caste is continually taking on the shape of class and casteism is growing in the form of classism.

In the words of Ogburn and Nimkoff, “A social class is the aggregate of persons having essentially the same social status in a given society.” In this way, social class is a group of people who maintain or share external and internal unity. External congruence is the congruence or similarity of dress, customs, language, and other external cultural actors. Internal unity is the unity of thoughts and other external cultural factors. Internal unity is the unity of thoughts and ideas and most of all unity of community sentiment. While caste represents an open society.

The distinction between Class and Caste

Traditionally, caste is associated with traditional society and class with: