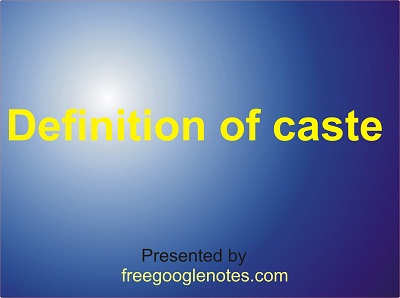 1. According to Sir Herbert Risle, A caste may be defined as a collection of families or groups of families, bearing a common name, which usually denotes or is associated with a specific occupation claiming common descent from a mythical ancestor, human or divine, professing to follow the same professional calling and are regarded by those who are competent to give an opinion as forming a single and homogenous community.” Criticizing this definition of caste Hutton has said that it is the people of the class who claim descent from a mythical ancestor and not members of the caste.

2. According to Martindale and Monachesi, “A caste is an aggregate of persons whose share of obligations and privileges is fixed by birth sanctioned or supported by religion and magic.” This definition of the caste is incomplete since it includes several main characteristics of the castes.

3. According to A. W Green, “Caste is a system of stratification in which mobility, movement up and down the status ladder, at least ideally may not occur. A person’s ascribed status is his lifetime status. Birth determines occupation, place of residence, style of life, personal associates, and the group from among whom one must find a mate. A caste system always includes the notion that physical or even some forms of social contract with the lower caste people are degrading to higher caste persons. The caste system is also protected by law and sanctified by religion.” This definition of caste is more satisfactory and all around.

Modern thinkers consider it best to enumerate the features of caste in defining it. This is what Hutton, Ghurye, N. K. Dutt, and many others have done. Of the predominating characteristics of caste, the following are the most important.

1. Determination by Birth- The membership of caste is determined by birth. A person remains the member of the caste in which he is born and his membership does not undergo any change even if the change takes place in his status, Occupation, education, education, wealth, etc.

2. Rules and Regulations Concerning Food- Each individual caste has its own laws, which given the food habits of its members. Generally, there are no restrictions against fruit, milk, butter, dry fruit, dry fruit, etc, but kachcha food (bread, etc.) can be accepted only from members of one’s own or of a higher caste.

3. Definite Occupations- In the Hindu scriptures there is a mention of the occupation of all varnas. According to Manu the functions of the Brahmin, Kshatriya, Vaishya, and the Shudra were definite. The functions of the Brahmin were to study, teach, guide, and perform religious rituals, and to give receive alms; that of the Kshatriya to study, perform religious rituals, give alms, punish the evil and go to war; that of the Vaishya to study, perform religious rituals, give alms, work in agriculture, trade and animal husbandry; that of the Shudra to do menial work for all the other varnas. Having developed from the varna system the occupations in the caste system are definite. In Hindu society even today in most cases the blacksmith pursues the Occupation of his father; the son of a carpenter becomes a carpenter while the son of a shoemaker becomes a shoemaker.

4. Endogamous Group- The majority of persons marry only within their own caste. Brahmin, Kshatriya, Shudra, and Vaishya all marry within their respective castes. Wastermarck has considered this to be the chief characteristic of the caste system. Hindu community does not sanctify inter-caste marriage even now.

5. Rules Concerning Status and Touch ability- The various castes- in Hindu social organization are divided into a hierarchy of ascent and descent one above the other. In this hierarchy, the Brahmins have the highest and the untouchables the lowest position. To the sense of superiority among the Brahmins is also conjoined the law of untouchables. This sense of superiority is much exaggerated and manifests in the South. The very touch and sometimes even the shadow of a member of the lower caste is enough to defile an individual of a high caste. In Kerala, a Namboodari Brahmin is defiled by the touch of a Nayar, but in the case of a member of the Tiya caste a distance of 36 feet must be kept to avoid being defiled and in the case of a member of the Pulayana caste the distance must be ninety-six feet. The stringent observation of the system of untouchables has resulted in some low castes of the Hindu society being called untouchables who were consequently forbidden to make use of places of worship, cremation ground, educational institutions, public roads, and hotels, etc., and was disallowed from living in the cities.

The above-mentioned characteristics of the caste system do not take into account all the numerous variations presently taking place in the caste system. Actually, it is difficult to formulate a definite and permanent definition of caste. The most that can be done is to describe the features of the caste system in a particular context since the caste system is undergoing considerable modification and transformation. It would not be surprising if castes were eventually reduced to a word signifying merely a group since inter-caste marriages are increasing and the restrictions on mutual behavior, exchange of goodwill, and conduct are breaking. Some people are changing their caste on the strength of their monetary wealth, the occupations for the various castes are no longer fixed, a member of any caste takes to any profession that he desires, the Brahmins have been deprived of much of their past glory and respect, very few caste panchayats are to be seen and even they have no control whatsoever over the members. Many people have even started excluding their caste name from the name they use.

In this way caste is continually taking on the shape of class and casteism is growing in the form of classism. On the one hand, some conditions are favoring its existence while on the other they are unfavorable.

so you have learned