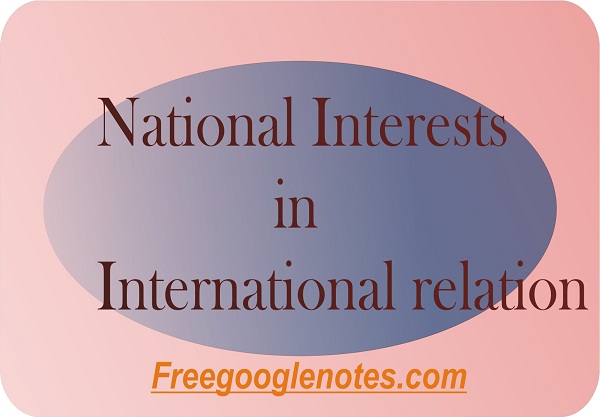 Q.3. Explain the methods adopted for the promotion of National Interests.(ba llb)Ans. Methods for Promotion of National InterestsBroadly speaking three methods are used for the promotion of national interests:1. Coercive measures2. Alliances3. Diplomatic negotiations.1. Coercive Measures. The coercive measures adopted by the states for the enforcement of national interest broadly fall into two categories according to Beard(i) The measures taken within the state which do not infringe directly upon the state again whom they are taken and(ii) Measures directly operating against. the state which is the object of enforcement procedure. The acts falling in this category are of a negative character, even though, they may produce positive effects. Some of the important measures which fall in this category include acts of non-intercourse, embargoes, boycotts, retaliation and reprisal, severance of diplomatic relations, etc. Anyone or all of these measures can be employed by the state for the advancement and enforcement of its national interest. Even though these measures are considered coercive. These involve the use of physical force. These are of quite a wide range and include an actual display of force. History is replete with numerous examples when different states resorted to the display of force to enforce their national interest. The state can also take certain measures on its own soil to advance its national interest which ultimately operates against the enemy state. These include actions like seizure and confiscation of the property of the offending state or its subjects by way of compensation in. value for the wrong, suspension of operation of treaties, an embargo of ships belonging to the offending states lying within its ports, seizure of ships at sea, etc. All these methods are prime face acts of war. The state against whom they are directed has to determine whether it wants to engage in war or not. In extreme form these measures can take the shape of actual Lombardment of coastal areas or military occupation of an inland centre:

2. Alliances. Alliances are concluded by two or more nations for the protection and promotion of common interests. As a result of the alliance, the protection of these common interests becomes a legal obligation that the member states are duty-bound to discharge. These alliances may be concluded for the protection of a large variety of national interests. Their nature and duration depend on the nature of the interest sought to be protected. According to Prof. Robinson, “The advantage of pursuing the national interests through alliances, of course, lies in the translation of inchoate, common or complementary interest into common policy and in bringing the nation’s power directly to bear on questions of national interest.”

Relation of Alliances to National Interests

(ix) Common Enemy. Finally, the alliance built by the nations against a third country or common enemy are generally vague and lacks concrete objectives.

3. Diplomatic Negotiations. Diplomatic negotiations are used to reconcile the divergent interests of the state through the process of. “mutual give and take.” These prove fruitful only if the interests of Concerned states arc complementary or compatible. In such cases, an agreement can be reached through mutual bargaining. In the case of incompatible or conflicting interests negotiations are virtually impossible.
In the larger interests of the international community, the states must try to protect a certain common interest, for example, they must avoid the use of nuclear weapons. They should not resort to war in view of the highly destructive nature of these weapons. They must realize that the outbreak of war will not only mean the possibility of their defeat but also the destruction of the domestic society and civilization. They must prefer diplomacy over war.