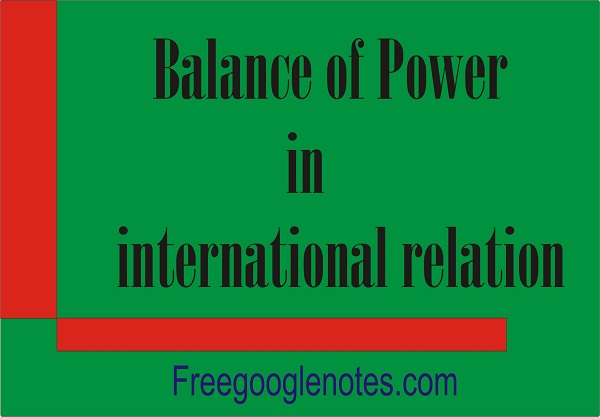 Balance of Power in international relation

Q. 1. What do you understand by the concept of Balance of power? How far is it relevant for maintaining International peace in the present-day world situation?
Ans.   Meaning of the Balances of Power: The term “balance of power” has been used in so many different ways that it almost defines the definition Inis L. Claude has remarked. “The trouble with the balance of power is not that it has no meaning, but that it has too many meanings.” This term actually contains many different meanings at the time that it is. virtually meaningless. According to Marting Wight, “The nation of the balance of power is notoriously full of confusion.” Palmer and Perkins remark”The essential idea is sample enough. It is ‘equilibrium’ of the type represented by a pair of scales when the weight in the scales are equal balance results.” Applied to a world of sovereign states, the concept of the balance of power assumes that no one power of the combination of power should be allowed to grow so strong as to threaten the security of the rest.

Definition: According to Sidney B. Fay the balance of power: “means such a just equilibrium” in power among the members of the

family of nations as will present any one of them from becoming sufficiently strong to enforce its will upon the others. George Schswarzen Berger defines it “as an equilibrium or a certain amount of stability in International relations that under favorable conditions is produced by an alliance of states or by other devices.” G. James Dickinson uses the term in two senses. t means, on the one hand, an equalizing, as of the two sides when an account is balanced and on the other hand, when a nation seeks preponderance of power in its own favor like a bank balance. 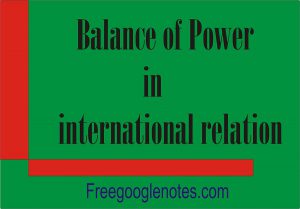 Inequality of power distribution refers to ‘such a condition in which Some states are stronger than the others and thus enjoying preponderance of power. This situation has been compared to a bank balance’, which is not a balance at all but a ‘remainder”. An example of such a balance is the treaty of Versailles which was an attempt on the part of the allies to cripple Germany and keep her permanently week.

aims at creating or preserving ‘equilibrium’ or ‘disequilibrium’, as the case may be. It is a policy of maintaining or producing a condition. As a policy, the balance of power is a study of the methods and techniques that states adopt in order to achieve equilibrium or disequilibrium.

3. As a System: Balance of power is a system for the conduct of relations among nations. The basic assumption of the balance of power system is that excessive power anywhere in the system is a threat to the existence of others. The most effective antidote to power is power, that is, power alone can limit power. The idea of equilibrium plays an important role in the system subscribers to this theory believe that power equilibrium is the universal law. The idea of an equilibrium process may be automatic, semi-automatic, or manually operated. An attempt to upset the balance is set right by automatic îorces. However, the writers like Morgeutha believe that the balance of power system has to be consciously maintained by diplomatic and other contrivances.

The theory of Balance Explained: Nations do not come in conflict with each other only because of conflicting interests. The prime cause of conflict is that every nation is bent upon mail raising its own power. If a nation succeeds the achieving a tremendous accumulation of power, it poses a threat to other nations. As a result, other nations are ałso motivated to increase their power so that they may deter such threats and meet power with power. If a single nation is unable to raise sufficient power, it will enter into an alliance with other nations and ultimately all with their contained power will the preponderant power. n peacetime there may be. separate balance, in the different parts of the world but in times of crisis, the simple balance will prevail.

Balance of power works like the power of scales. Like-two scałes of the balance, nations of the world also group themselves in two opposing camps. Like the two dishes of the bałance carrying the weights varying in weight (being heavier or lighter), big and small nations, according to the am1ount of pOwer they posses, join both the camps. The weight on the 1wo dishes of the balance are nations. Varying in weight according to the amount of power they possess. Power is balanced if the nations in each canıp (!like the weights on each scale) are of equal power. So long as the balance is maintained there is peace and the Independence of all is secured. Balance of power is a system that does not allow a nation or a group of nations to achieve preponderance of power and thus endanger the liberty of other nations.

Characteristics or basic assumptions of a balance of power:

1. Balance of power system assumes ‘power equilibrium, as a rule, there should be equilibrium in power relationships of the nations.

2. Excessive power anywhere in the system is a threat to the existence of other nations so other nations must rise to this danger and meet power with power.

3. Balance of power is achieved by the active intervention of nations.

4. The balance of power has generally tended to favor the status quo. But the history that the policy which disregards the force.

5.The balance of power is a universal and natural law working automatically. It is a not matter of choice but is brought about automatically by competition of power among nations.

6. The nations which palya the balance of power game seek to meet a balance but an imbalance in their favor, Quincy Wright observed, each statesman considers the balance of power good for others but not for himself. Each tries to get out of the system in order to “hold the balance’ and to establish a hegemony, perhaps eventually an empire, overall the others.

7. The balance of power game is one of the great powers “Although small ones are vitally concerned in the outcome.” As spyknau observed they can only be weights in a balance used by others.”

8. One of the underlying assumptions of the balance of power is that the relative power positions of various states can be measured to a great degree of accuracy and that this measurement can be utilized in balancing the world forces.

9. Another underlying assumption of the balance of power is whenever the balance is upset. li is set right by the automatic forces. Automation is possible because of the unique role played by the balance which throws its weight sometimes on one scale and then on another scale. It is assumed that the balance would maintain splendid isolation and be ready to join the side of the scale which becomes higher at any given period.

independence of states and maintain their existence and not to preserve peace.

Is the balance of power concept relevant today?