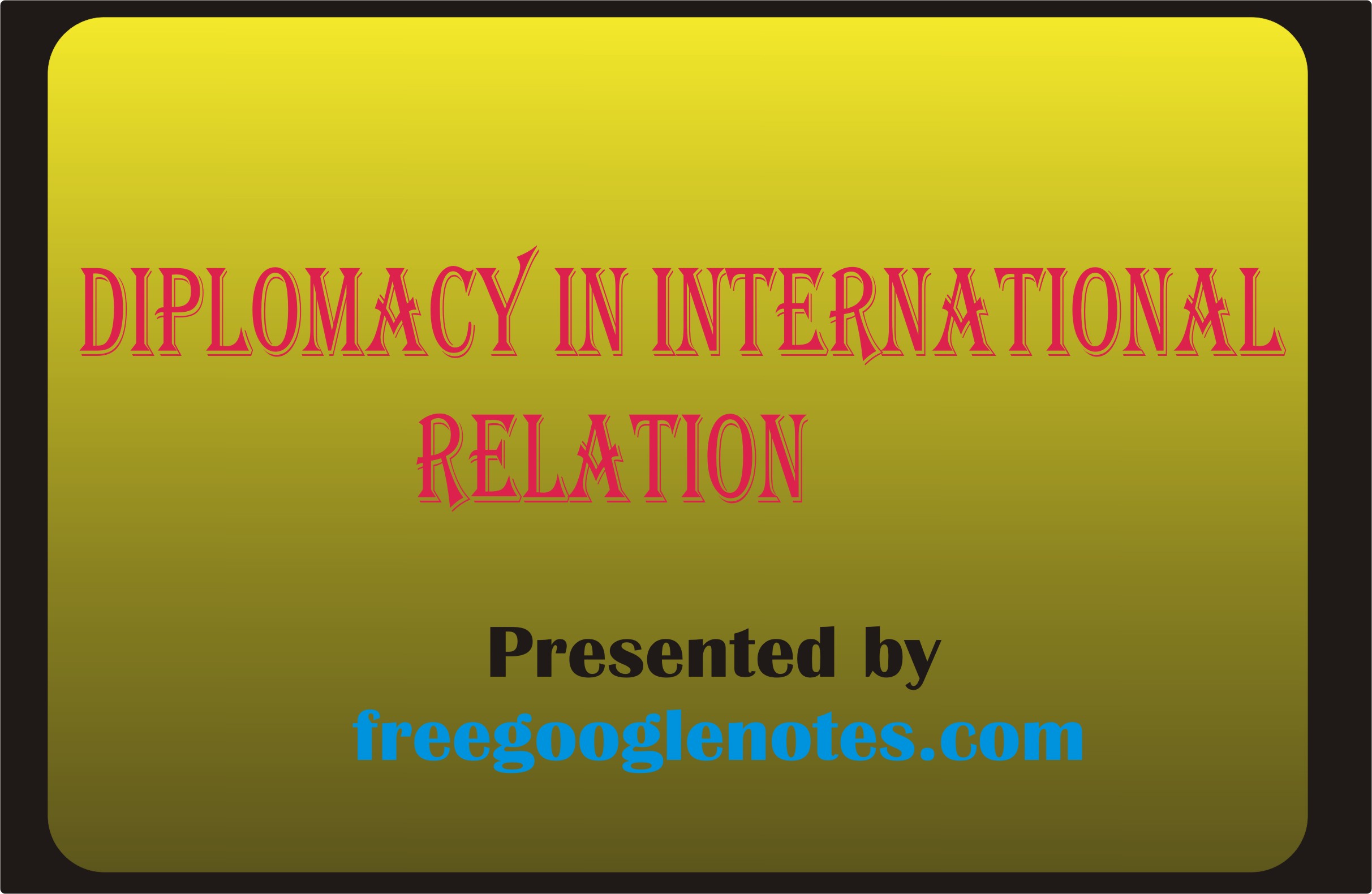 In this post, you will read Diplomacy in International Relation

Q.1. Define Diplomacy and its role in International Politics.
Ans. Diplomacy-The term diplomacy has been used to cover a variety of ideas. Harold Nicholson’s points have been used to cover a taken to mean several different meanings. In his classical book on diplomacy, he wrote that this term is employed to mean five different words. It is employed as a synonym for “foreign policy.” It signifies ‘negotiation.

It also denotes the processes and machinery by which such negotiation is carried out’. Its fourth meaning is “foreign service and the fifth interpretation which this world carries is that of an abstract quality or gift, which, in its best sense, implies the skill in the conduct of international negotiation’; and, in its worst sense, implies that more guileful aspects of tact. All of these meanings can be rejected.

Even the last meaning i.e., skill and guile in international negotiation, is too narrow. It does not define diplomacy as such. Tact, skill, and glue can be considered standards or criteria of good diplomacy but not characteristics that define diplomacy in general.

If diplomacy is employed to mean foreign policy, it becomes too broad. Diplomacy is only a means by which the policies decided upon are put into effect. It is only one part of the process by which foreign policy is formulated and executed.

Diplomacy is, infact, “the management of international relations by means of negotiation; the method by which these relations are adjusted and managed by ambassadors and envoys; the business or art of the diplomat.

In Quincy Wright’s definition the second part i.e., the art of negotiation is more correct for the purpose of defining diplomacy. Diplomacy is the art of negotiating issues that may involve war and it is the duty of diplomacy to avert such a crisis. Only in the areas of possible agreement diplomacy has a

Earnest B. Hass Allen S. Whiting feels that diplomacy is a cumulative effect put forth by the rival parties in negotiations. They say, “The accumulative political-economic, and military pressure upon each side, formalized in the exchange of demands and concessions between negotiations.” In the view of Prof. Morgenthau, ‘diplomacy is the promotion of the national interests by peaceful means.

Nature of Diplomacy-In the background of diplomacy there exists some political, economic, and military pressures. Support; demands and concessions are also exchanged in diplomacy. Negotiations are adopted as a means in it conducted by the diplomats. Thus, the function of diplomacy is too great concessions and seek concessions.

The basis of diplomacy is always a peaceful method like negotiation. Morgenthau holds the view that diplomacy strives to promote national interests by peaceful means and Nicholson has derived that the outbreak of war in the failure of diplomacy. Palmer and Perkins do not agree with Nicholson’s view.

In their words, “Diplomacy does not cease to function, as Nicholson suggests, in times of war: although it necessarily plays a different role in war-time. The work of diplomats, as of foreign ministers, may even expand. The diplomacy of two World Wars of this century provides convincing support for this contention.

Diplomacy provides an opportunity for limited use of force. Whenever there is a stalemate in a conference, one of the parties may suggest the use of limited force or threat to use force to compel the other party in question to concede to the demands. Many examples from history may be quoted to support this contention. Thus, diplomacy may be best understood by subscribing the following characteristics to it, i.e.

(A) Diplomacy is like a machine neither moral nor immoral. ts utility depends upon the motives and merits of the users of it.
(B) Diplomacy functions through a labyrinth of foreign offices embassies, legations, consulates, and special mission all over the world,
(C) It is commonly bilateral in character.

(E) Diplomacy is related to a multitude of interests, from the simples matter of details in the relations between two states to vital issues of war and peace. When it breaks down, the danger of war, or at least of a major crisis is very real.

Role of Diplomacy-Diplomacy had been one of the most popular had commonly used craft since the very inception of human civilization. In our religious scriptures, there are very many references which illustrated the prevalence of the highest kind of diplomacy mission of Angada to dissuade Ravana from precipitating a crisis and that of Sri Krishna is Moregenthau to settle the dispute amicable are fine illustrations. Kautilya’s Arthashtra’s and ‘Sukra Niti‘ are monumental works on the art of diplomacy.

The Romans did little to advance the art of diplomacy by negotiation but they did make important contributions to international law. The diplomatic methods, by Roman emperors and eastern emperor, were used with greater skill and greater effect. For a clear understanding of the role of diplomacy, its history from the treaty of Westphalia (1648) must be carefully studied. With this analysis, the role of diplomacy can be illustrated as follows-

(i) Balance of Power System (the Period of Monarchies)– After the treaty of Westphalia (1648). Europe saw the emergence of many sovereign states which had designed their relations. For the security of smaller states and for stopping any other states from accumulating power to such proportions as may endanger the security of others, on the principle of balance of power. A vast network of treaties came to Existence in this era in which the members changed their sides as needs and circumstances demanded. The Holy Alliance and Concert of Europe

buttressed by the operations of the balance of power system brought systematic conduct in international relations. The game was played according to Lo the new. ruins with a fair degree of success. The system broke down in the twentieth century. Nevertheless, it provided the framework for the practice of diplomacy.

(ii) Modern Period (The System of Collective Security)-The first World War totally destroyed the balance of power system. Scientific and technological developments rapid increase in communications, the growing sense. of the community of nations and the increasing appreciation of the importance of public opinion have contributed to

the total eclipse of the sacred diplomacy. This has led to the enormous Case in a diplomat’s functions. As the number of international organizations, groupings, and conferences increased, multilateral diplomacy took an added significance. The system of collective security was one with which the diplomacy of this period can be associated.

(iii) Between Two World Wars-The treaty of Versailles failed in its mission of maintaining peace and security in Europe as it had some inherent weaknesses which made it a force. The terms of this treaty were so harsh and revengeful that instead of maintaining peace it bred contempt. Hitler kicked it as the first opportunity. The fascist regimes of Europe evolved diplomacy of malicious propaganda, the threat of war, use of force, and arrogance in diplomatic conduct. In the western democracies, where collective security and balance of power still existed in ghost form, chose the diplomacy of appeasement. From 1939 to 1941, the role of diplomacy was confined to prevent the occurrence of war in their territories.

Making of International Law-The international law, which was shaped in different diplomatic conferences again, brought the old concept of balance of power in a political sense. In the eighteenth century, its multilateral aspect became more significant. The multilateral aspect could evolve some general norms of diplomatic conduct that were to be practiced by the family of nations. These were-
(i) Sovereignty,
(ii) Recognition by other States,
(iii) Self defense,
(iv) International obligations,
(v) Consent,
(vi) Good faith, and
(vii) Freedom of the High Seas. Thus, diplomacy played a very significant role in the evolution and codification of international law. The Hague conventions of 1899, 1907, 1930, 1956 and 1966, Geneva conventions gave international law a crystallized form.

Maintenance of peace– The most important role of diplomacy is to maintain such a peace which may help the state to promote national
starved for imperial peace for a major power, and peace for dominance and balance of power.

Uneasy Peace-The peace in modern times can be characterized as uneasy peace. This is an environment in which the rival state indulge in sabotaging the interest of each other without an armed hostility. The role of diplomacy, under such conditions, is related to vicious
propaganda. Sabotaging, espionage, and murders. Here the traditional diplomacy is assisted by a large number of subsidiary services to pass on the information or care on the under-hand practices. To harm to

interests of other states with means other than war is the intention of diplomacy.

War-Harold Nicholson was of the view that the outbreak of war is the failure of diplomacy. His contention is not wholly right. Diplomacy, in times of war, is more important and its role is more significant than in times of peace. In times of war, diplomacy may successfully try to alienate the enemy, to break the morale of the enemy populace, and convince the world public of the justification of declaring war. It may successfully mobilize resources and public opinion in its favor.

Mobilization of World Public Opinion- Diplomacy is the art of presenting the interests of the state in an appealing way. The interest of the state is given the color of high human ideals. The motive behind all these endeavors is to mobilize world public opinion. The states participate in intentional diplomatic conferences feigning sincerity and honesty, while at heat they conspire to sabotage them to pursue their interests, by placing a joker.