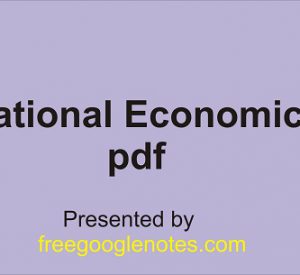 The present International Economic Order evolved during the Second World War and the years thereafter. This order was quite different from the economic order found in the nineteenth or early twentieth century. These changes became necessary on account of the revolutionary changes that had taken place in the field of technology and communication. The emergence of multinational corporations and the appearance of a number of independent states in the arena of the international field also necessitated these changes.

According to Dr Kissinger, the present international economic order is based on four principles
(i) open the expanding trade
(ii) free movement of investment capital and technology
(iii) readily available supplies of raw material and (iv) international cooperation.

The economic system which emerged in the post-World War II period was based on the confrontation between two superpowers. In the East, the Soviet Union imposed a Communist international economic system based on the principle of a socialist commonwealth. The members of the socialist commonwealth were economically isolated from the West and became dependent on the Soviet Union. In the West, an economic system based on liberal principles of free trade and free capital movement was created with the USA occupying a dominant position in the System. The Third World countries in the main continued to be part of the western economic system which emerged in the post World. War l period consisted of three Sub-system, Spero has designed these three sub-systems as
(i) the western system of Interdependence
(ii) the North-South system of dependence, and (iii) the East-West system o Independence. Spero admits that the separation of the three systems is artificial since interactions and problems overlap all systems in the

real world. But since the problem and process of the sub-system differ, it shall be desirable to know about these sub-systems in some details.

1. Western System. The Western system includes developed market economics of North America, Western Europe, and Japan. The units of this system arc highly developed capitalist countries and are involved in great mutual economic attraction, This increased interaction has been largely due to the US dollars, the internationalization of banking, monetary consequences of multinational corporations, and creation of Euro currency and Eurobond, markets. As a result of this increasing interaction, the events in one country have a direct impact on other members of the system. Thus the monetary, trade, and investment policy in one country has a direct impact on the monetary trade and investment policies of other countries in the systems.

Though the interdependence of the member states of the system has contributed to their economic prosperity, it has also given rise to a number of critical political problems. In the first instance, the growing interdependence of the members of one system has led to an increased number of disturbances with which the decision-makers have to cope. Quite often while formulating their domestic economic policy, these leaders are guided by the disturbances arising out of conditions obtaining in other countries of the system. This poses a serious problem for the states who desire to control theirs. own economies and has contributed. to the weakening of the national management of economies.

2. The North-South System. The second sub-system of the present economic system in the North-South system is concerned with the relationship between the developed market economics and the less developed economics of countries of Africa, Asia, and Latin America. Unlike the Western system which is composed of almost equał factors, this system is characterized by complete inequality and disparity. There are vast differences in per capita gross national income of the various units. There is also a great difference in the per capita average gross national product. As a result, the gap between the rich and the poor countries is further widening.

A major feature of this system is the growing dependence of the South on the North, which naturally enables the latter to influence the events in the Southern countries. The Southern countries are dependent on the North for a number of things. Firstly they are greatly dependent upon them for trade because a large percentage of their gross national

Products come from trade with the North. The dependence of the South On North for trade is an account of their small interest market, the concentration of exports to a single or a small number of primary products; and vulnerability to the demand conditions of a single market. Secondly, the countries of the South are dependent on the North for investments due to a lack of adequate resources. In’ most of the countries of South the foreign investment have been made in important, sectors of production, raw material production, export industries, and dynamic sectors of the economy.

Thirdly, the countries of the South are also dependent on the North for money. Often the currency of dependent countries of the South is linked with the currencies of the dominant Northern country when enables the atter to influence the internal as well as the external monetary policy of these countries. The advanced countries influence the domestic and foreign policy of the countries of the South by providing them assistance to overcome the balance of payments problems. Even when such assistance is provided through International Monetary Funds the donors are able to exercise considerable influence in this regard. Fourthly, aid is also used as an instrument by the North to manage and manipulate decisions from outside. Aid also contributes to dominance in the field
of trade and investments.

In addition to the above factors which clearly demonstrate the dominance of North over South, exclusion of the countries of South from the. major economic institutions of the North-the international Monetary Fund (IMF), the International Bank for Reconstruction and Development (IBRD), and the General Agreement on Tariffs and Trade (GATT) further demonstrates their infícrior position vis countries of North. In the absence of any share in the decision-making process, the underdeveloped countries of the South have expressed their dissatisfaction with the system and demanded the creation of a New International Economic Order. Another argument advanced for doing away with the existing system is that it does not provide the countries of the South a share in the resources and other benefits and aims at perpetuating the South’s dependent status.

3. East-West System. The third sub-system is the East-West system. Thus sub-system is characterized by independence in so far as there is very little interference amongst the partners and consequently very little impact on each other. The cold war of the post-World War II period also contributed to the isolation of these systems from each other. The

Western countries led by the USA evolved their own political institutions like IMF, IBRD, GATT, etc. in which the East did not take part. On the other hand, the East followed a policy of economic and political isolation within the sòcialist commonwealth. However, in recent and political isolation within the socialist commonwealth. However, in recent years these two institutions are not working in isolation and there has been a growing economic interaction between the two.

After briefly examining the various sub-systems of the present economic system, it shall be desirable to have an idea about its main features. The main features of the present economic order are as follows.
1. It is based on East-West Division and is characterized by the confrontațion of the rich and the poor.
2. It is protective of the interest of the north and is governed by economic interactions based on the principle of non-discriminatory liberal trade.
3. It is nationalist and irrational.
4. It is based on market place economy. Actually, the trade is so regulated that the developed countries gain access to markets of developing countries on favorable terms.
5. It involves the inflow of foreign private capital from the developed countries to the developing countries and consequent increase in the activities of multinational corporations.

Critical Evaluation of the Present System

between states and within countries. Further, the present system is bringing about the destruction of our environment, and the unlimited exploitation indulged by it is bound to result in scarcity. of resources.

Secondly, the present system is not essentially based on free enterprise and free markets, because it is guided and manipulated in many respects. In actual practice in place of open and expanding trade, we sec a tariff system with low tariffs. for raw materials and high tariffs for industrial products. This has blocked the industrialization of poor countries.

The flow of capital and the credit system is also dominated by the United States, European countries, and oil-producing countries. There is no free flow of technology and the system regulating the ownership of patents, existent restricts the use of those patents to rich countries.

Finally, the nation of readily available raw materials is also virtually non-existent because we are confronted with the threat of scarcity.

(v) The developed countries have created certain preferential trade blocks like EEC, COMECON, etc. which afford protection to the members at home and assure them large overseas markets without competition from the Third World countries.

If we are genuinely interested in finding a solution to the problem of an equitable division of property of scarcity of natural resources and of depletion of the environment the only solution lies in the New International Economic Order.