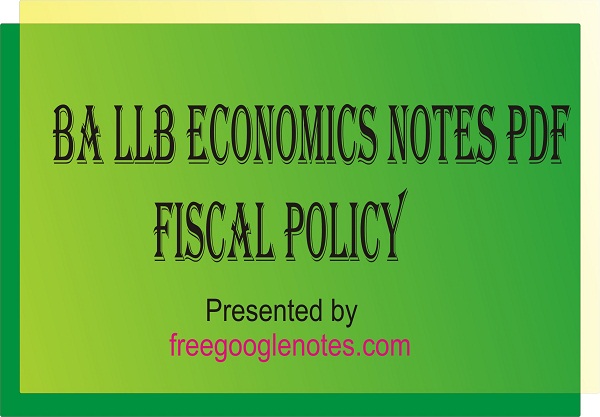 Ans. We can define fiscal policy “as a policy that uses public finance as a balancing factor in the development of the economy.” “Government activities as regards spending, taxing, borrowing, deficit financing, and budgeting are known as fiscal activities and the purposeful manipulation of these activities to attain desired objectives, say, economic stability, rapid economic growth, and full employment- is known as fiscal policy” “By a positive fiscal policy, we mean the process of shaping public taxation and public expenditure so as
(i) to help dampen down the swings of the business cycle, and

(ii) to contribute toward the maintenance of a progressive high employment economy free from excessive inflation or deflation.” Fiscal policy is fundamentally concerned with the aggregate effects of public expenditure and taxation on income, output, and employment.

The main components of the fiscal policy are as follows
(1) Budgetary Policy: The old classical economists advocated a policy of balanced and small budgets. However, this policy will not help to tide over depresšion and unemployment according to Prof. J. M. Keynes. The need at such a time is to increase the flow of income-stream into the economy and could be made possible, according to Prof. J. M. Keynes, only through deficit budgeting. Hence, it is essential that the government should incur large deficits in the budget and then meet these deficits either by borrowing from the banks, etc. or through printing fresh currency notes.

(2) Taxation Policy: In order to fight depression and unemployment, the taxation policy of the government, according to Keynesians, should be so designed as to stimulate both consumption and investment simultaneously. The only way to do it successfully is to reduce the general burden of taxation on the community. The commodity taxes should be cut down to the minimum so as to stimulate consumption on the part of the public.

The main objectives of fiscal policy are as follows :
(1) Economic Stabilisation: The first and foremost objective of fiscal policy is to eliminate cyclical fluctuations in economic activity and to maintain it at a stable level. The up-and-down swings in business are checked by compensatory fiscal action to counteract ‘fluctuations. Strict steps are taken to control both inflation and deflation and efforts are made to make the budget more or less balanced over the period of the cycle.

(2) Economic Growth: The second important objective of fiscal policy is to. maintain a continuous upward trend in economic activity. Total outlay is increased in depression but is not allowed to decrease correspondingly in a boom. Stability continues to be an important aim of fiscal policy.

(4) Provide Full Employment: Fiscal policy is considered an effective instrument for reducing. unemployment and securing full employment. Full employment occurs where there is a job available for everyone who is fit to work and wants a job at the prevailing wage rates.
(5) To accelerate the rate of saving, investment, and capital formation.
(6) To bring stability in prices.
(7) To restrict monopolies and check the concentration of economic power in fewer hands only.
(8) To establish a balance in foreign trade.
(9) To have rapid economic development in the country.
(10) In the case. of developed countries, the main objective of fiscal policy is to have long-term stability.
(11) To encourage socio-economic overhead capital.
(12) To reduçe inflationary pressure.

The major objectives of fiscal policy in an underdeveloped country are:

(1) to maximize the level of aggregate savings by applying a cut to the actual and potential consumption at large.

(2) to maximize the rate of capital formation, to break down economic stagnation, and thus to lead the country to the path’ of rapid economic progress.

(3) to divert capital resources, from less productive to more productive, and from socially less desirable to socially more desirable uses. The objective is implicit in planned economic development.

(4) to increase employment opportunities in the country. The government should undertake local public works of community development involving more labor and less capital per head. Besides undertaking the establishment of public enterprises “the government should encourage private enterprises through tax holidays, concessions, cheap loans, subsidies, etc. In the rural areas, efforts should be made to encourage domestic industries, by providing training, finance, marketing facilities, and small machines connected with them.

(5) to protect its economy from the demon of inflation. Inflation can prove ruinous to an underdeveloped economy. Hence the fiscal policy of an underdeveloped country should be designed in such a manner as to curb inflationary forces arising during the process of económic growth.

(8) to increase both the national income of the country as well as per capita income. It can be done through

The role of fiscal policy in a developing country like India may be studied under the following heads :

(1) Fiscal Policy and Capital Formation: Fiscal policy is used as an instrument of capital formation in developing countries. It performs this task in two ways: (i) by expanding investment in public and private enterprises, and (ii) by directing the flow of resources from socially less desirable to more desirable investment. The increase of investment in the public sector is done by implementing the programs of development on a large scale along with finding requisite funds for this purpose. As regards expanding investment in the private sector, a fiscal policy is used as an instrument in stimulating investment in the private sector by allowing depreciation allowances in company taxation, tax holidays. development rebates, provision of finance, subsidies, creation of reserves and funds, and other incentives. The second aspect of this policy changes the content of the total investment in the economy and creates. capital by bringing about a quantitative improvement in it.

(2) Fiscal Policy and Mobilisation of Resources: Developing countries suffer from a very low rate of voluntary private saving. “The propensity to consume there is high and the propensity to save very low resulting in a deficiency of resources, mainly financial resources. For the mobilization of financial resources, the following fiscal means may be used
(i) taxation,
(ii) public borrowings,
(iii) deficit financing and
(iv) stimulating private savings,
(v) profits of public enterprises,
(vi) transfer of surplus agricultural labor to capital projects. There must be a harmonious combination so as to accelerate economic progress without inflation.

(4) Fiscal Policy and Economic Stability: Another objective of fiscal policy in a developing country is the promotion and maintenance of economic stability. Economic instability in developing countries is mainly caused on account of instability in other countries. The exports of these countriès usually consist of primary products and these commodities are particularly sensitive to fluctuations of demand abroad. The fluctuations are more in prices than in output. There are, therefore, variations in terms of trade. Thus, export earnings are particularly subject to fluctuations, and the foreign exchange resources arc unstable and unreliable. This kind of instability is corrected by using particular taxes than by aggregative fiscal policy.

(5) Fiscal Policy and Redistribution of National Income: Developing countries suffer from marked inequalities in incomes and wealth. Inequalities in incomes and wealth can be reduced by adopting a suitable fiscal policy. Besides other measures, the main elements of the fiscal policy should be (i) progressive taxation of income and wealth, (ii) suitable public expenditure programs for poorer sections of the society.

(6) Fiscal Policy and Price Stability: Another objective of fiscal policy in a developing country is the promotion and maintenance of price stability. The main reason for price instability is inflation.

There is a tendency for price to rise on account of the large development expenditure which is seldom accompanied by a corresponding increase in production. However, a certain degree of inflation is both unavoidable and perhaps desirable in a developing economy.

But if inflation goes too far, it distorts the economy and retards economic development. An anti-inflationary fiscal policy hàs, therefore, an important role in a developing economy. Such fiscal policy involves a reduction in public expenditure, increase in taxation ànd public borrowings.

However, reduction in government expenditure causes total spending in the economy to decline and this keeps down total demand. this is, however, not possible when investing in the public sector is a must. Hence reduction should be effected in the unnecessary expenditure of the government.