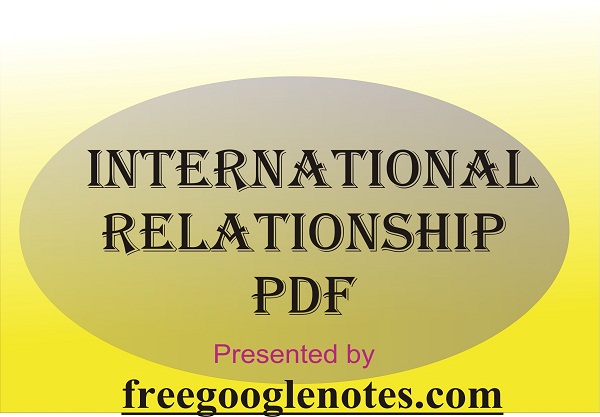 In this post, you will read International Relation has been written according to the syllabus of BA LLB 1st year, 2nd semester.

Q. What is International Politics? Explain the difference between International relations and Politics. Discuss the scope or International politics.(BA LLB)Ans. The term ‘politics’ connotes the people have wants and needs. To satisfy the wants people to come into contact with one another Naturally, the common needs and wants to give birth to ropes. Since all men may not have an identical interest, conflict becomes necessary. Group do certain activities and follow certain policies to fulfil their interests. The interactions of the groups to fulfil their interests to their maximum extent is politics. Thus the term politics involves three factors(i) Interest, (ii) Conflict, and (iii) Power. This have been well explained by Quincy Wright that politics is “the art of influencing, manipulating or controlling major groups so as to advance the purposes of some against the opposition of others.”As in politics, so in international politics, there are sovereign states whose interests are not identical. These interests of the sovereign states are called the ‘national interest’. The sovereign states, in order to achieve their interest, come into conflict with one another and as a means to achieve the ends, power is generally used. Thus, international politics is that aspect of interactions and relations of sovereign states in which the element of conflict or interest is present.Definition: As has been said, International Politics is the study of conflicts and interactions common states. In the words of Mongenthau, “International politics is the struggle for, and use of, power among nations.” The term power denotes the quantity of influence which the nations exert on the minds and actions of the people of one another. Sprout and Sprout also defined International Politics are those aspects of the interactions and relations of independent political communities in which some element of opposition, resistance and conflict of purpose or interest is present. According to Thompson. ‘International Politics is the study of rivalry among nations and the conditions and institutions which ameliorate or exacerbate these relationships. Hartmann links that International Relations, as a field of study is focused upon the processes by which state adjust their national interest to those of other states.” Padelford and Lincoln define it as “the interactions of state polices within he changing patterns of power relationships.” Palmer and Perkins opine that International politics is essentially concerned with the state system. With the assistance of this definition it can be deduced that International politics is a process in which nations try to protect their incompatible interest by means of power.

It is established beyond doubt the international politics derives its strength from international relations. The former uses the latter as the basis and subject matter of study and hence both are one and the same timing.