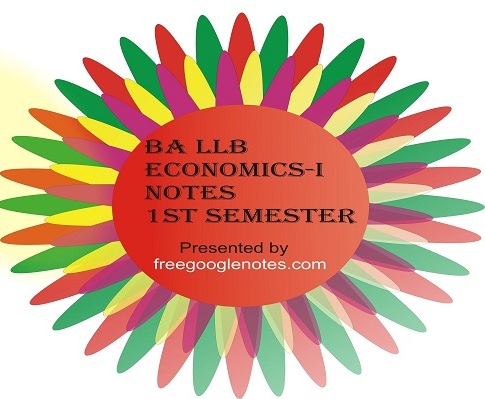 A mixed economy is a golden mean between a capitalist economy and a socialist economy. It is an economic system where the price mechanism and economic planning are used side by side. There is a mixture of private and public ownership of the means of production and distribution. Some decisions are taken by households and firms and some by the planning authority. All developing countries like India are mixed economies.

Features of Mixed Economy
A mixed economy possesses the following features:
(1) Pubic Sector. The public sector is under the control and direction of the state. All decisions regarding what, how and for whom to produce are taken by the state. Public utilities, such as rail construction, road building, canals, power supply, means of communication, etc. are included in the public sector. They are operated for public welfare and not for profit motive. The public sector also operates basic, heavy, strategic and defence production industries which require a large investment and have a long gestation period. But they earn profits like private industries which are utilised for capital formation.

(2) Private Sector. There is a private sector in which the production and distribution of goods and services are done by private enterprises. This sector operates in farming, plantations, mines, internal and external rade, and in the manufacture of consumer goods and some capital goods. This sector ‘operates under state regulations in the interest of public welfare. In certain fields of production, both public and private sectors operate in a competitive spirit. This is again in the interest of society.
(3) Joint Sector. A mixed economy also has a joint sector which is run jointly by the state and private enterprises. It is organised on the basis of a joint-stock company where the majority- shares are held by the state.
(4) Cooperative Sector. Under a mixed economy, a sector is formed on cooperative principles. The state provides financial assistance to the people for organising cooperative societies, usually in ‘dairying, storage, processing, farming, and purchase of consumer goods.
(5) Freedom and Control: A mixed economy possesses the freedom to hold private property, earn a profit, consume, produce, and distribute, and have any occupation. But if these freedoms adversely affect public welfare, they are regulated and controlled by the state.
(6) Economic Planning. There is a central planning authority in a mixed economy. A mixed economy operates on the basis of some economic plan. All sectors of the economy function according to the objectives, priorities and targets laid down in the plan. In order to fulfil them, the state regulates the economy through various, monetary, fiscal, and direct control measures. The aim is to check the evils of the price mechanism.(7) Social Welfare. The principal aim of a mixed economy is to maximise social welfare. This feature incorporates the merits of socialism and avoids the demerits of capitalism. To remove inequalities of income and wealth, and unemployment and poverty, socially useful measures as social security, public works, etc. are adopted to help the poor. On the other hand, restrictions are placed on the concentration of monopoly and economic power in the hands of the rich through various fiscal and direct control measures.

Merits of Mixed Economy
(1) Best Allocation of Resources. Since a mixed economy incorporates the good features of both capitalism and socialism, the resources of the economy are utilised in the best possible manner. The price mechanism, the profit motive, and the freedoms of consumption, production, and occupation lead to the efficient allocation of resources within the economy. But where the possibility of mal-allocation of resources appears, the state regulation and control rectifies it. Thus shortages are avoided, productive efficiency increases and cyclical fluctuations are eliminated.

(2) General Balance. A mixed economy maintains a general balance between the public sector and the private sector. There is competition as well as cooperation between the two sectors which arc conducive for achieving a high rate of capital accumulation and economic growth. Further, an estimate of the successes and failures of the two sectors can be made by comparing, their respective performances, and corrective measure, are adopted accordingly. Thus the inconsistencies of the private enterprise economy and the ‘paper guesses’ of the planned economy are avoided in a mixed economy. By maintaining a higher level of production in the two sectors, the state is able to achieve the targets laid down in the plan.
(3) Welfare State. A mixed economy contains all the features of a welfare state. There is no exploitation either by the capitalists as under a free enterprise economy or by the state as under a socialist economy. The workers are not forced to work, Workers are provided monetary. incentives in the form of bonus and cash rewards for inventions. Labour laws are passed fixing minimum wages, hours of work, and laying down the working conditions of workers in factories and on. farms. Social security is also provided to workers in the event of unemployment, disablement, death, illness, etc. The production and sale of noxious articles are banned, while that of essentials are increased for the benefit of the people at large.
Demerits of Mixed Economy
(1) Non-Cooperation between the Two Sectors: The experience of the working of mixed economies. reveals that the public sector and the private sector do not see eye to eye with one another. The private sector is treated like a step-child and groans under the various restrictions imposed upon it by the state. The private sector is taxed heavily, while the public sector is given subsidies and preference over the former in the supplies of inputs. Thus a sense of bitterness and non-cooperation develops between the two sectors.
(2) Inefficient Public Sector. The public sector of a mixed economy is a big burden on the economy because it works inefficiently. Bureaucratic control brings in inefficiency. There is over-staffing of the personnel, red-tapism, corruption and nepotism. As a result, production falls and losses emerge.3) Economic Fluctuations. The experience of the working of the mixed economic system in the developed countries also reveals that they have not been able to remove economic fluctuations. This is because of the improper mixture of capitalism and socialism. The private sector is allowed to operate freely under a loose system of government regulations. and controls. The public sector also does not operate under the rigid conditions which are laid down under a planned economy. It has to depend on its supplies of raw materials, intermediate products and factors on the vagaries of the market mechanism. If in the market, the prices of
inputs are increasing due to their shortages, the public sector will be equally experiencing these shortages and price increases. Hence economic fluctuations which are a characteristic feature of a capitalist economy are equally experienced in a mixed economy.
Mixed Economy in India:
The Indian economy is a mixed economy. The public sector and the private sector co-exist. There are more than 200 public sector enterprises that operate bais, heavy, defence and strategic industries, banks, insurance, consumer goods, drugs, mines, etc. They function under state regulation and control. They have been mostly started in backward areas to remove regional disparities and to provide infrastructure facilities, more employment, and incomes. Prices of goods and services manufactured in public enterprises are fixed by the state. They. are administered prices and are based on the profit-price policy.