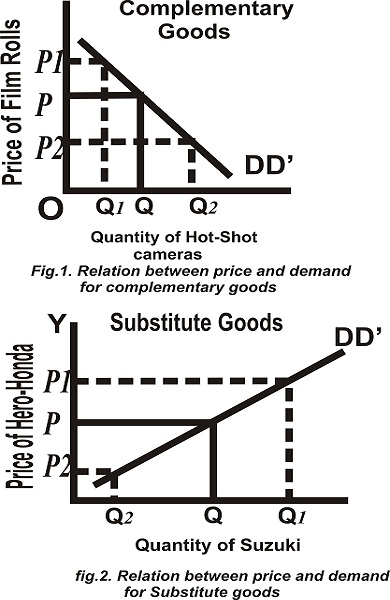 What is Demand? Discuss the factors on which demand for a commodity depends.

Ans. In Economics, Demand means demand backed up by enough, money to pay for the goods demanded.

Thus, in Economics we are concerned only with demand which is effectively backed up by an adequate supply of purchasing power with effective demand.

Moreover, demand for a good is always expressed in relation to a particular price and a particular time. For example, we ray be willing to purchase two kilograms of peas at rupees five per kilogram, but we may not demand peas at all if they have priced rupees 20 per kilogram. Similarly, during winter we will willing to buy a cardigan priced at rupees five hundred buys we may not buy one at this price during the summer season.
Therefore, we may define the demand for a good as the amount of it which will be bought per unit of time at a given price.

Factors on which Demand for a Commodity depends

Most important among these determinants are (a) the price of the commodity, (b) the prices of other related commodities, (c) level of income and wealth, and (d) tastes and preferences of consumers. These are called determinants of demand and are lumped together as follows

and other factors (U). Each of these factors influences demand in a different manner. To isolate the effect of. these factors and to study the relationship between demand for a commodity and of the above variables, we make the assumption of ‘ceteris paribus, i.e., ‘other thing being equal. For example, if we want to study the relationship between price and demand for commodity N, we shall have to assume other factors, like, PR, Y, T, and U to remain constant or unchanged. 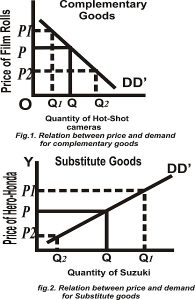 Competitive goods or substitute goods. are those goods where one. can be consumed with equal case and satisfaction in place of another. for example, coffee can replace tea; likewise, cheese can be a substitute. For mutton, or motorcycle users can shift to scooters. Change in the price

of a commodity is bound to affect the demand for the related commodity. For example, if the price of coffee falls, Consumers may substitute coffee.  A fall in the price of milk-shake or fruit juice will lead to a fall in the demand for soft drinks. A rise in the price of scooters will create more demand for motorbikes. Likewise, a rise in the price of Hero-Hond motor-bike will result in an increased demand for a TVS-Suzuki bike.
This type of relationship is known as a direct relationship and is represented by the upward sloping demand curve. as shown in Fig, 2. In this figure, quantity. of TVS-Suzuki is measured along the X-axis, and the price of Hero Honda along the Y-axis, If the price of Hero-Honda falls to OP2 demand for TVs-Suzuki falls to OQ2 and likewise with rising in the price of Hero-Honda to OP1 demand for TVs-Suzuki rises to OQ1
The above type of relationship between demand for a commodity and the price of the related commodity is also known as Cross demand.
(iii) Income of the consumer. Ordinarily, with an increase in income of an individual or of a household, demand for goods increases. However, this may not always be true. We may distinguish between three types of commodities:
(a) necessaries,
(b) comforts and luxuries, and
(c) inferior goods. Necessaries are those goods that are essential for human existence like food, cloth, shelter, etc. These goods, therefore, occupy a place of priority in the consumer’s order of preference. Therefore, even at a low level of income, a large share of income is spent on such goods. With the rise in income, it is possible that the consumers may demand more of these goods. But, there is a limit to which, even a very rich man can eat food. In other words, with an increase in income, demand for necessary. goods may increase up to a point, but beyond that point, an increase in income does not affect demand for this type of goods. Comforts and luxuries are those goods which make our life more enjoyable; for example, a simple meal is a necessity for existence, a four-course meal is more enjoyable, a ten-course dinner is a good luxury. As income increases, demand for comforts and luxuries will also go up. Inferior
goods are those goods that are rated very low in the consumer’s estimation and for which better substitutes may be available; for example,

(iv) Tastes and Preferences of the Consumers. All factors affecting the consumer, other than prices and income, are conveniently lumped together as tastes and preferences. Tastes and preferences change according to the nature of business, age, the family composition of an individual, etc. Demand for a commodity is directly related to the tastes and preferences of the consumers. For example, a teacher to justify his profession may demand more books and journals than an office-going clerk. Similarly, old persons make more demand for sticks and spectacles than the youth. Similarly, if high heel shoes come into fashion, demand for Such shoes increase, During the rainy season, demand for umbrellas, raincoats, and rubber shoes increase, whereas, during winters, demand for Woollen clothes rises.

The other important determinants of demand are as follows :
(v) Size of Population. Ordinarily, a large population will provide more demand for goods. There are more vegetable vendors, fruit-sellers

and general stores in thickly populated areas. Similarly, a large number of doctors open their clinics in such areas. More the number of consumers more will they demand.

(vii) Distribution of Income. if income is distributed more equally among the different sections of the society, all of them will be in a position to demand goods. But if the income is so unevenly distributed that the majority of the people get a small proportion of the national income, the demand for commodities will be limited. The majority of people consisting of the poor might wish to consume different goods, but for want of sufficient purchasing power, they will not be able to do so. In other words, unequal distribution of income brings a fall in the quantity demanded.

(ix) Weather Conditions. Change in the weather conditions also influences consumer demand. For example, a sudden rainfall on a hot summer day. will bring. down the demand for ice. Prolonged cold-spell tends to push up the demand for fire’ wood, room heaters, etc.