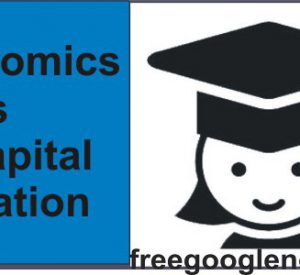 Q.6. Elaborate on the following
(a) Capital Formation in India.

(b) Role of Financial Sector in Economic Development of the Country.

(d) Role of Commercial Banks in India’s Economic Development.
Ans. (a)Capital formation signifies addition to the reproducible Wealth of a country, and measures that part of the rational wealth that is retained for use influence production.

For the estimation of capital formation (and consumption) in the Indian economy, the CSO employs the commodity flow method. Estimates of the value of construction, machinery, and equipment and of changes in stocks for each of these two activities are made separately. Thus.

capital formation is measured from data relating to production, export, and import of items going into this category. of investment and from estimates of the changes in stocks of these goods. In the case of ‘construction’, a base measure of the total value is obtained by inflating the estimated value of materials used and adding to this factor incomes.

When it comes to the estimation of savings, the economy is divided into three sectors and the savings of each estimated separately, and not always by the same method.

Where a discrepancy arises between the estimates of aggregate domestic savings plus net capital inflow abroad and that of domestic Capital formation the former is taken as the controlling total and the discrepancy is treated as ‘errors and omissions.’
(b) It is well-recognized that the financial sector plays a critical role in the development process of a country. Financial institutions, instruments, and markets: that constitute the financial sector- act as a conduit for the transfer of resources from the net. savers to net borrowers, that is, from those who spend less than they earn to those. who spend more than they earn.

The financial sector performs this basic economic function of intermediation through four transformation mechanisms :
(i) Liability-asset transformation (that is accepting deposits as a liability and converting them into assets such as loans);

(ii) Size transformation (that is, providing large loans on the basis of numerous small deposits);

(iii) Maturity transformation (that is, offering savers alternative forms of deposits according to their liquidity preferences while providing borrowers with loans of desired maturities);

(iv) Risk transformation (that is, distributing risks through verification which substantially reduces risks for savers that would prevail while lending directly in the absence of financial intermediation).

The financial structure comprises not only commercial and cooperative banks but also a wide array of specialized development banks in the areas of agriculture, industry, external trade, housing, tourism, and social security institutions like mutual funds or unit trusts. The structure of financial institutions is thus quite well-diversified. The diversification away from the banking system is greater than in the advanced developing countries or even some developed countries.

introduction of financial innovations-new products and proçesses-has resulted in financial instruments that are better tailored to the preference patterns of households, farmers, and business firms. The money market is being developed, with the introduction of new instruments like inter-bank participation, certificates of deposits, commercial paper, and 182 days treasury bills.

(c) Creation of credit is considered as a major. the function of, the commercial banks. As financial intermediaries, commercial banks reap a rich harvest which they have not sown. They are in a position to do So by extending loans and advances to their customers out of the deposits left with them. A prudent banker by his experience and following the law of averages knows that on no single day or at any one time during his working hours on any day all of his depositors will be calling upon him to withdraw their deposits. Deposits are, undoubtedly, a banker’s liabilities to his depositors which must be honored on demand. A bank that refuses to do so or is unable to do so will soon find his cash base eroding away, his solvency having been put in doubt and the public’s confidence in him shaken. A vigilant banker cannot afford to run this rişk. But, at the same time, since he knows that he is not going to be called upon to honor all of his liabilities simultaneously he cannot afford to keep his reserves idle. For one thing, cash is a barren asset that does not bring in any. income to the banker; second, he is to pay interest to his depositors. and also meet various administration expenses besides earning enough residual for shareholders of the bank. Thus, the banking business is such that no banker can afford to keep idle cash reserves with himself. By his experience, he knows that he can safely extend loans and advances, charge interest from his debtors, pay a part of income so realized to his depositors in the form of interest on their deposits, and after meeting the administrative expenses, carn a residual for his shareholders. As a matter of fact, he is in a position to extend loans and advances equal in value not only to his initial cash reserves but equal to multiple times the value of his reserves. We now examine the process by which a commercial bank creates credit.

Banks do not create money out of thin air. In fact, there is nothing magical or incomprehensible aboút the creation of bank deposits. At every step one can watch what is happening to the bank accounts. Usually, a bank cannot lend more than what it receives from its depositors. But, through the multiplication of loans and advances, the bank can multiply its deposits. The process is called “multiple expansion of bank deposits.”

In modern society, bank deposits are created in two ways. A bank can create deposits passively against the cash or cheques it receives from

Another way the banks can create deposits actively is by creating claims against themselves and in favor of borrowers or sellers of assets or securities acquired by the banks. Such actively created deposits are known as derivative deposits. These deposits àrise from granting of loans or purchase of securities or assets by the bank. The size of derivative demand deposits is determined by the lending and investing activities of the banks to the extent the banks create such deposits in their bookS in favor of those to whom they grant loans or from whom they buy securities. Since a derivative deposit is actively created by the bank, it increases the community’s ownership of demand deposits without involving any decrease in people’s holding of currency. Thus, it increases the total stock of money available to the community. The creation of derivative deposits is identical to what is commonly known as the creation of credit by commercial banks.

(d) Role of Commercial Banks in India’s Economic Development
Commercial banking operations, after the nationalization of banks in 1969, have become an integral part of India’s economic policy. As such an objective criterion to assess the performance of these banks would be to examine how far the objectives of nationalization have been, accomplished in India. This type of examination can proceed along the following lines:
(1) Branch Expansion: There has been a phenomenal increase in the number of bank branches since the nationalization of major commercial banks leading to what has been described as the increasing ‘bankisation’ of the economy.
(2) Deposit Mobilisation: There has been a substantial rise in the rate of deposit mobilization during the last five-and-a-half decades.
The aggregate deposits of commercial banks have gone up from Rs.4,636 Crore in 1969 to Rs. 15,49,296 crore in August 2004. The annual rate of growth of deposits has varied from the high of 23 percent during 1978-79 to the low of 15.3 percent in 1990-91.

(a) The proportion of current deposits n total deposits has increased.

(b)There has been a considerable increase in the share of personal deposits and a large fall in that of business deposits, which underscores the development of saving habits among the people.

(c) So far as the maturity pattern of term deposits is concerned, a preference for longer maturities over shorter ones has been observed. Undoubtedly, the rate of growth of deposits has been quite 1inpressive. But a few limitations need to be noted in this respect.

(i) Seemingly impressive deposit increase has been helped by Cxtrancous factors like deficit financing and severe inflation, foreign remittances, the shift of money incomes in favor of the richer segments of the community including professionals, etc.

(ii) The relative position of different centers in deposit share has by and large remained unchanged except for an initial shift in favor of Tura areas. The ‘urban’ and ‘metropolitan’ centers continue to contribute Over 68 percent of total deposits.

(iii) As a result of the explosive growth in the number of deposit accounts as compared with the rise in the total quantum of deposits, the average amount per deposit account has shown a substantial fall. These qualitative changes have increased the interest cost as well as servicing cost of deposits to the banks.

Since one of the important objectives of bank nationalization was to channelize the flow of credit to the priority or hitherto neglected sectors the benks have made marked progress in this direction. About 40 percent of total credit is advanced to the priority sector. There has been a rise in the credit-deposit ratios of rural branches, augnıentation of bank advances rendered in underbanked States änd regions by earmarking higher investments in their securities and bonds. A large share of the net demand and time liabilities is invested in the Central and State Government securities and other approved securities, under statutory liquidity shares/debentures/bonds of term-lending institutions; the latter in turn are a major source of funds for financing private and public sector investment in agriculture and industry.

(5) Dimensional Expansion in Activities: Along with the fast expansion of the branch networks, there has been a dimensional expansion in activities. The banks have taken up entirely new activities which in the earlier period were regarded as falling beyond the scope of banking. The new business areas explored include :
(a) merchant banking,
(b) portfolio management,
(c) leasing,
(d) housing,
(e) consumer banking,
(f) dealing in stock exchanges as members,
(g) mutual funds,
(h) factoring, and
(i) venture capital funds. Besides, banks are getting ready to enter the hire-purchase business, software development, travel-related services, and insurance. For these, activities, banks have normally set up separate subsidiaries. (6) Promotion of New Entrepreneurship: Through their active participation in programs banks have been endeavoring not only to provide credit but also to build up and support entrepreneurship and self-employment. Further, purpose and project are, presently, the guiding factors in’ providing bank credit, and not capital and collateral as it used to be. The emphasis in bank lending is on disbursing credit based on an appraisal of the genuine productive business requirements of the borrowers and the relevance of the project in the context of desired socio-economic growth. In short, after nationalization, the corporate objective of banks has undergone a change from one of making only profits to one of making profits to serve the nation. In other words, profit-making is no more an end in itself but a means to achieve other large objectives of growth and social justice. However, in fulfilling the objective of social justice, the profitability of a bank’s operation is affected in two ways: the cost involved in the new task is higher, and the return from them is lower than in the case of the traditional activities of banks. Therefore, the success of a tank lies in achieving a fine blend of commercial banking and social banking.