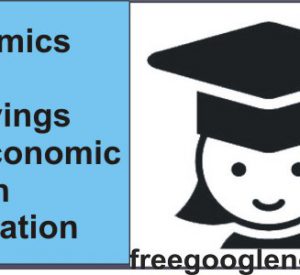 Q.7. “While India has achieved a high rate of saving and investment, the basic constraint as in realizing the growth potential remains.” Do you agree? Give reasons for your answer.

Ans. High Saving and Investment Ratios and Low Economic Growth-a Paradox.
Nature of the Paradox: From a review of trends of saving and investment in India it is clear that both of these had, during the 1970s, reached the much-converted mark of 20 percent of national income that is generally associated with high-income developed countries. In the early 1970s itself the level and rate of growth were nowhere near that reached even by the middle-level industrialized countries. The growth rate of national income and also of industrial output was less than 4 percent. Most importantly, the growth rate had been vastly fluctuating instead of showing any self-sustained trend which should have been associated with persistently high saving and investment ratios. It in a way reminds one

of a poor man who has won a big lottery and does not know what to do with all the money, The rags to riches story are exciting but coping with riches, perhaps, is not so.

This is the paradox of the Indian situation.

(1) Nature of Savings: Shetty and Menon have examined at length the nature of savings and the forces that have stimulated their growth. They have reached the following two conclusions
(a) The increase in domestic saving has been somewhat due to extraneous factors like compulsory deposits and foreign inward remittance. Compulsory deposits are in the nature of forced savings, whereas foreign inward remittances have already started shrinking; and
(b) It is very likely that these savings have been absorbed b unprecedented increases in the financial costs of projects whether in the agricultural or in the industrial sector. To this extent, the economic system failed to take advantage of the increased saving.

(2) Nature of Investment: The investment rate in the economy picked up along with the saving rate. However, as Shetty and Menon point out, there are at least three important ‘reservations’ on the otherwise high rate of investment. These three reservations are as follows:
(i) A significant part of the increase in domestic capital formation during the period was in the form of increased stocks. As a result, the ‘ net investment in fixed stocks was quite low. Investment in stocks does not add to the productive capacity of the economy.

(iii) The third reservation relates to the physical availability of investment goods. The available data suggest that the total supplies of investment goods were short of the implied investment estimates at constant prices, which goes to proves that a substantial part of the domestic savings in money terms had been absorbed by increases in commodity prices.

The rising ICOR could be attributed to a number of factors.
(a) Prices of capital inputs rose at faster rates than the prices of their products.
(b) In some cases, for example, in irrigation and mining, the more difficult and, therefore, more costly opportunities were exploited.

(d) Poor and in some cases declining efficiency of invested resources directly as well as through their linkages did not permit capital to stretch itself fully to output.

(e). Delays in the completion of projects also contributed considerably to, the increase in the COR.
(f) The rapidly changing technology and the consequent need for modernization in many industries within the organized manufacturing sector and in other crucial sectors would lead to an increasing tendency towards higher levels to’ capital intensity, These forces would, in turn, lead to an increase in the industry-specific or sector-specific capital-output ratios unless some of the counteracting forceS also Simultaneously operated in those sectors or industries to check this tendency have come down to 3.75: 1. This has come about largely because reforms improved economic efficiency in several ways.

The ICOR declined from 4.00 to 4.00 in the 1980s. The fall in the ICOR was shared by almost all the sectors, more prominentły by agriculture, manufacturing, and transport. Thus, the decade of the 1980s which shows ‘a signıficantly higher growth rate also shows significantly lower ICOR, the build-up of infrastructure and capabilities over the earlier three decades certainly has been used to advantage in the decade of the 1980s. The 1990s witnessed further improvement in the ICOR. It is being estimated to have come down to 3.75: 1. This has come about largely because reforms improved economic efficiency in several ways.

However, these trends in ICOR cannot be sustained for long. Investment in long gestation infrastructure and core sector industries which require more capital is gathering momentum. A rise in capital-intensive investment to avert an infrastructure squeeze on growth is inevitable. What is chancy is the commensurate rise required in the saving rate. If this does not rise fast enough, the current account gap will widen and pose a constraint on future growth.

(3) Macro-economic stability in general and inflation in particular known to have an impact on saving. There are controversies as to the exact nature of the relationship between the two.

(4) The efficiency of financial intermediation has a strong relationship with the saving rate. In particular, financial saving i5 Promoted by ensuring an adequate return relative to other physical and other forms of saving.

(5) It is noticed that the higher the proportion of the working population to the total population, the greater is the saving rate. On this count, we must be aiming for larger employment opportunities that are likely to enhance the saving rate.

(6) There are strong social influences such as the role of extended family and the societal values placed on the saving rate in terms of intergenerational obligations. In this regard, we continue to have a strong bias in favor of saving.

(7) Availability of insurance and tax benefits are also known to have a posítive effect on saving. Studies have shown that lax benefits have contributed substantially to the increase in financial savings.

(8) A factor generally contributing to a higher saving rate relates to what may be termed as contractual saving, mainly PF arid other contributions. There is substantial scope for increasing contractual savings in our country. This could be an important instrument for improving long-term financial savings. Such savings, being of long-term tenor, are critical to financing our infrastructural needs now.

Private Corporate Saving: The growth of private corporate savings is determined as much by the macro-environment as by micro-conditions at the firm level. There are a few factors relevant to us in making an assessment of prospects.

(1) The growth of the corporate sector as a whole, which in our case has been accelerating in the post-reform period.
(2) The growth of corporate income which had seen large increases for a while was followed by some deceleration. However, competitive pressures, apart from infrastructural bottlenecks, could result in thinner margins for corporates, unless compensated by efficiency.
(3) The tax treatment has a strong influence on incentives to plow back profits, In fact, improvements in corporate saving in the recent past could be attributed at least in part, to a more favorable tax regime.
(4) Macro-economic stability and policy-stance especially in regard to interest rate and exchange rates would influence a corporate’s decision to invest and to plow back profits.

Public Saving: Public sector saving will have an important bearing on the total saving performance of the country, and the success in this regard would depend on strong fiscal management. The contribution of

Public sector saving has to be analyzed at the center, state, and local government levels and in terms of the government sector and public enterprise sector.

Foreign Saving: The level of foreign saving will depend as much on our own policy environment as on global developments. In assessing the prospects, three factors are important.

(1) The current account deficit should. be such that it can be financed by normal capital flows. Since the share of foreign trade is relatively small, we should be cautious in setting the level of the sustainable current account-GDP ratio.

(2) The flow of foreign savings would be enhanced if the economic fundamentals are regarded as good. Since domestic savings form part of such fundamentals, it being at a comfortable level would be of help. Foreign saving thus would not be a substitute but a supplement.

(3) The overall credibility and sustainability of macroeconomic policies matter a great deal for a sustained flow of foreign savings. The policy and regulatory environment needed for attracting large foreign savings should also take into account the time needed to prepare the local institutions and industry to compete and collaborate.

The Tenth Plan has set out the macro-parameters for a warranted GDP growth rate of 8.0 percent, in the form of a savings ratio of 29.88 percent and a gross investment rate of 32.6 percent (implying an FDI component of 2.8 percent). These are by no means unattainable targets, but in order that they could materialize, the policymakers would need to put in place a whole gamut of reforms covering fixed management, the financial sector, the capital markets, and disinvestment of public enterprises, apart from policy measures needed to rationalize subsidies, interest costs, and recovery of user charges in public services.