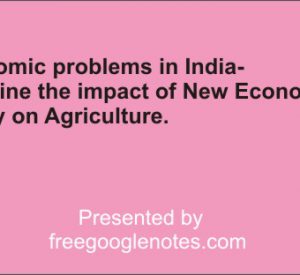 Economic problems in India-Examine the impact of New Economic Policy on Agriculture.

Examine the impact of New Economic Policy on Agriculture.

(Economic problems)For a liberalized economy to take off it is necessary that Fundamental reforms are introduced that make the agricultural sector more productive and equitable. As a part of the ongoing structural adjustment program and new economic policy, the government has made some policy changes. The major changes, in this respect, can be recounted as follows :

(a) The Union Budget 1997-98 proposed- (a) to repeal the Rice Milling Industries (Regulation) Act, 1958, and the Ginning and Pressing Factories Act, 1925;
(b) to remove licensing, price control, and requisitioning under the Cold Storage Order, 1964;                (c) to resume domestic futures trading in respect of ginned and baled cotton, baled raw jute and jute goods.

(b) DAP and MOP fertilizers were decontrolled on the recommendations of the Joint Parliamentary Committee on Fertiliser Pricing. But a subsidy of Rs. 1,000 per tonne was reintroduced and the price of urea reduced by 10 percent. The DAP subsidy of Rs. 1,000 continues for the domestically produced DAP.

(3) Administered Prices Reforms. Administered prices cover 22 commodities, which account for about 90 percent of the area and production of crops. The degree of implementation of these prices varies Widely. The support prices of various commodities have been raised considerably since 1990-91 compared to their increase in the early years. These increases in prices have tended to bring down the gap between the domestic prices of wheat, rice, and cotton and their border prices but the former is still substantially lower than the latter.

(4) Spread of Technology. The nature of new agriculture technology is also influencing the reform process. Unlike in the past when the green revolution technologies emerged from the publicly funded international and national research organizations, the new generation biotechnologies are frequently the products of private organizations.

The implications of these initiatives may be illustrated as follows:

(1) Agriculture needs to be treated as an ‘industry’.

(2) There should be a parity of prices between what the farmers sell and what they buy from non-agricultural producers in the domestic market.

(3) It would be in order to export agricultural produce so as to cultivate a profitable market for further increases in farm production and productivity.

(4) Special incentives must be provided for exports to weaken the pull of the domestic market.              All the above four would require that priority should be given to what is called the ‘globalization principles’ in the determination of the prices of farm commodities and their free movement in the domestic market as well as their export and import.

(a) A logical extension of the globalization process for agriculture is that agriculture must be given a wider and sharper business orientation so that not only the farmer is encouraged to invest in commercial agriculture but the urban industry also finds scope for investment in agriculture and allied sectors. Corporate agriculture should be encouraged in areas that require advanced technology and large investment for achieving higher growth for exports. Agro-processing by corporates may be allowed by encouraging vertical integration.
(b) Private sector would have to be made to play a greater role. Some of the important areas for this task can be identified as follows:
(i) A legal market in-land lease is allowed, so as to encourage the flow of private capital, technology, and management practices into agriculture.
(ii) Financial resources can be utilisęd by private investors through the use of such instruments as heavily tax discounted bonds (the same model as used in the infrastructure sector).
(iii) Major irrigation projects where the state is unable to realize water dues and meet the operating costs of the headworks and canal systems should be handed over to the private sector.
(iv) There is a need to develop and test newer and higher-yielding, more drought-resistant, varieties in partnership with private laboratories.
Conclusion-

Economic problems in India-Examine the impact of New Economic Policy on Agriculture.