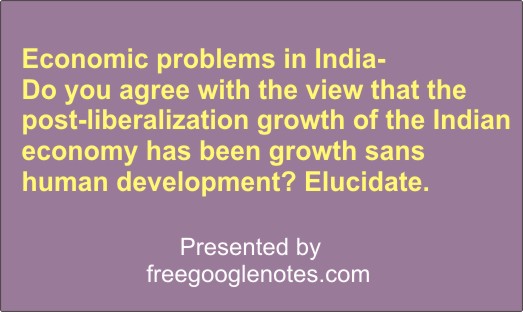 Do you agree with the view that the post-liberalization growth of the Indian economy has been growth sans human development? Elucidate.

(Economic problems)In the post-liberalization era, the Indian economy has witnessed a high growth rate. The medium and long-term outlooks are optimistic. This has time and again been highlighted by the leading economists as well as global institutions and consultancy agencies like World Bank and Goldman Sachs. The GDP growth rate has been projected at around 7 percent, which is still far behind China.

Nonetheless, the recent growth has been fuelled by the IT sector and of late the manufacturing sector is showing signs of coming of age. Indian concerns are going global with acquisitions leading to increased export potential. There is now a consensus that China and India would lead the global economic growth and India is the next economic superpower in making.

However, there are some genuine concerns, which must not be forgotten. Poverty eradication is moving at a slow pace, regional inequalities have increased further. There is now a widening rural-urban divide leading to poverty in the rural areas which itself is a consequence of the failure to create jobs in and outside the agriculture sector.

The Human Development record has been quite dismal. The next decade may see India as the most illiterate nation, both percentage and population-wide. A vast section of Indians suffers from nutritional deficiencies. Malnutrition is especially acute amongst rural children and women. A majority of the population still has no access to safe drinking water. Adding to these woes are the problems of sanitation and primary health facilities.

The Human Development Report 2003, published by UNDP places India on 127th. rank amongst 175 countries in its human development index. The rank of a nation is determined on the basis of a composite index that combines per capita income life expectancy and level of literacy.

Unless the country succeeds in eliminating hunger, malnutrition, illiteracy, and large-scale poverty within a reasonable time frame, there will be a setback to the reform process are consequently to the growth momentum of the economy. Already many of the crucial reform measures such as labor laws, privatization, reduction in non-merit subsidies, the pricing of public services, etc. are being shelved.
Hence, there are persisting inefficiencies and poor productivity levels in many areas.