Skip to content
Home » BA LLB » Legal System in India-Discuss the change and problems of modern family and analyze its effort on social disorganization| What is its future? 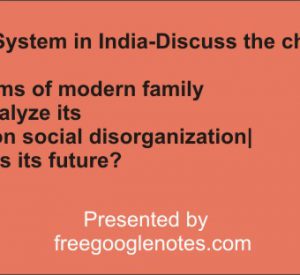 Legal System in India-Discuss the change and problems of modern family and analyze its effort on social disorganization| What is its future?

Discuss the change and problems of modern family and analyze its effort on social disorganization. What is its future?

In the modern period, the institution of family is undergoing rapid change and modification. The main changes in this connection, are the following:

2. Reduction in other activities of the family. Many of the other functions of the family have now been taken over by other agencies. The work of looking after and bringing up children is now being performed in creches, children’s parks, kindergarten schools, and babysitters. Hospitals undertake the work of delivering children and treatment. Restaurants make food for thousands of families.

3. Increase in family recreation. Modern families have been transformed into centers of recreation with the invention of the radio and television and the advent of indoor games.

5. Changes in the relationship of men and women. Now that women have gained equal rights with men, their mutual relationship has undergone much change. Mowrer has correctly written of the modern women, “She is no longer the drug and slave of other days.”

9. Smaller family. Due to the prolific use of contraceptives and the tendency to regard children as an obstacle in the progress and enjoyment of life, the birth rate is continuously falling and modern families are becoming smaller.

10. family disorganization. The process of disorganization is quite apparent in the modern family. The number of divorces is on the increase. The control which the family exercises over the individual are being lessened.

11. Instability. The modern family is no longer a permanent association. It is precarious and can be rendered void at any time.

Marriage has been reduced to a mere social contract which it is not difficult to break in the event of even the slightest function. According to Maclver, the modern family in comparison with the ancient and medieval families is very weak and unstable.

In this way the modern family is beset with many news problems the major among which now follow:

2. Problem of sexual adjustment. The modern family is also faced with the problem of sexual adjustment, it being the outcome of changes in sex values. D.H. Lawrence, among the Western authors, has presented a graphic and revealing sketch of this problem in his novels, Psychoanalytic literature has also adversely affected the ancient ideals of sex relationships. Today, much importance is attached to the gratification of sexual desires. Some people have gone so far as to declare variety in sex relationships not only desirable but necessary. This tends to encourage premarital and extra-marital sexual relationships. All the factors have the effect of creating sexual disharmony between husband and wife and as result numerous families are disorganized.

3. Marriage based on romantic love. The second major problem that confronts the family is that of marriages being based on romantic love. After marriages of this nature when the dreams of the husband and wife do not materialize in the family they are seriously frustrated. They start blaming each other and either lives in a state of perpetual strife or. break the ties of marriage. Elliott and Merrill in their book ‘Social Disorganization’ have described divorces as the inevitable consequence of romantic marriages.

5. Problems of working women. Nowadays there are more women who are employed outside the precincts of the home. They consequently do not get sufficient time to look after their children. Returning exhausted or their children. This hinders the development of children and increases conflict and misunderstanding between husband and wife.

6. Laxity in family control. A major problem has been created for the modern family by the decrease in the control exercised by the family over its members. This has undermined the administration of the family. Boy girl, husband-wife, brother-sister each wants to pursue his own course and does not relish any interference be it advice or be its rebuke.

7. Family conflict and strife. Changes in the values of life and reduction of family control in the modern family have led to increased conflict between husband and wife as well as between parents and children. This conflict is usually not apparent but it does disturb the peace of the family, destroy the faith in one another and remove the sense of psychological security.

8. Lower birth rate. The birth rate is falling constantly due to late marriage; frequent use of contraceptives and a tendency to consider children a burden. This tends to accentuate the instability of the family since the absence of children reduces the sense of responsibility in the husband and wife, besides preventing intimate family relations.

Causes of the instability of modern family

The modern family is unstable. An increase in the number of desertions, separations, and divorces, etc., is proof of this.

1. Less social protection in a family crisis. Previously, a family crisis of the nature of maladjustment between husband and wife was overcome by the constraining influence of the elders, kinsmen, and social mores and traditions, and the family was saved from disintegration, but with the existing loss of respect for a power of these modes of social control, the husband and wife are deprived of any guide or mediator and in a fit of temper or even vengeance they destroy the delicately and lovingly nurtured sapling which is the family, no matter how much remorse they may experience when they have cooled down. Previously, being financially dependent upon the husband the wife silently bore much injustice and did not dare think in terms of a separation. Now the women who are capable of earning their livelihood marry only for love and when that is not forthcoming there is almost nothing to deter them from dissolving their marriage. At some places, extreme laxity of divorce laws has led to very great instability and impermanence of the family.

2. Replacement of domination by co-operation. According to Maclver and Page, the basis of the husband-wife relationship in the family is no longer domination but cooperation. Previously, everywhere, be it the East or the West, the wife the dominated by the husband, and hence the family stability survived despite the husband’s dictatorship. But with the removal of the dominance, in modern times, the stability of this family can be maintained only by benevolence, sympathy, and cooperation. Generally, it is not easy to create these qualities. Hence, the instability of the modern family.

Many factors of modern civilization have a major hand in the disorganization of the family. The main causes are the following:

1. Industrialism. In the modern industrial system, women and children work in factories along with men. This reduces the unity of the family and increases disorganization.

2. Ideal of romantic love. Modern marriages are based on the idea of romantic love. When the dreams of the two partners do not materialize in the family, enmity increases and is gradually transformed into a conflict.

3. Hedonism. Modern civilization is hedonistic. In this people pay more attention to their rights than to their duties. This increases selfishness and the occasions for conflict.

4. Individualism. Modern civilization is also individualistic. No one wants to consider the interests of the family. Everyone is engaged in the consideration of solely his own interest. No one is prepared to sacrifice his smallest interest to benefit another. As a result of this, conflict in the family increases.

This has led some people to doubt whether the family will escape the present crisis in the highly industrialized and mechanized societies of the West. Will the family survive to continue in the form of a primary association? What will be the future of the family?

Actually, there can never be any doubts concerning the continued existence of the family since its basis is the fundamental needs of human beings. It would be no exaggeration to say that the family will assuredly exist in whatever varied or transformed form, as long as the human society exists. The desire for procreation is a natural desire in men. Outside the family, there can neither be any legal offspring nor any proper arrangement for its upbringing. Some of the other kinds of marriage systems and a family are needs to afford a permanent means for the gratification of the sexual impulses of men and women. The family satisfies not merely the physiological needs of the male and female but also their psychological needs, the desire to love and to be loved, the sense of psychological security, etc. The family exercises the control of society upon the individual.

The family creates an environment in which the child can be brought up to develop fully his personality and to become an ideal citizen, Maclver has written that many studies have revealed that among people aged more than thirty, the death rate among unmarried men and women is twice than of the married women and men. Among people who die as a result of tuberculosis, accidents, suicides, alcoholic indulgence, and sexual diseases, the proportion of unmarried is greater than that of the married. In the words of Truxal .and Merrill, “Mutual affection guards against many of the mental and physical tribulations of complicated society.” This is clearly indicative of The benefits which accuse men of the institution of the family. Actually, the family is a primary and fundamental unit of society.

Legal System in India-Discuss the change and problems of modern family and analyze its effort on social disorganization| What is its future?

hope it may helpful for you