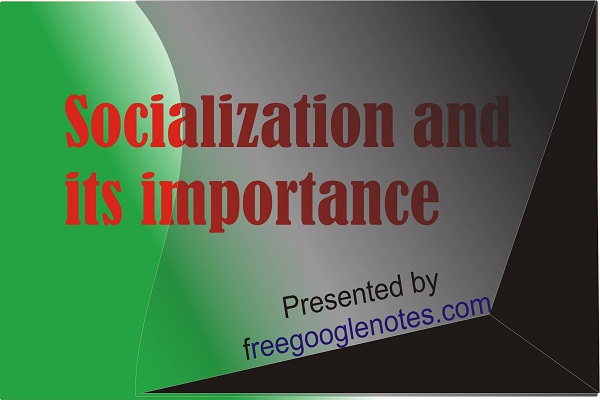 In this post, you will learn the concept of Socialization.

Ans.  Socialization and its importance.

Man is essentially a social animal. Because man is a social animal it does not mean that he is an ideal citizen, a good person or a very cultured individual. It only means that he is by nature fond of coming in contact with other people in society. This process of socialization changes according to the physical mental and moral differences. Sociologically a man speaking a man of a higher age group is different from a man of a lower age group man of a higher age group prefers in a group which is different from the group in which a person of lower age-group would like to move. In spite of all these members of society, man has to make so adjustment for living together and working together. Socialization is, therefore, very important in the life of an individual as well as society.

Socialization means coming together and making adjustments for doing work and discharging responsibilities of the society. This is what has been defined by Bogardus, “Socialization is the process of working together of developing group responsibility, of being guided by the welfare needs of others.” Every individual in the beginning in recalcitrant, rebellious and selfish. By and by his social consciousness develops and he starts accepting the social responsibilities. In the early period narrow mindedness, ego and selfish desires predominate. In certain matters, these traits continue their role throughout life. The effect is that the instincts and other inborn qualities continue to control throughout life. That is why Fichter has said that the socialization brings out the adjustment between man and his companion. As a result of this process, the man accepts socialization as a part of social behaviour and tries to make an adjustment with his companions. In fact, the existence of other members of society and making an adjustment with them become a part of man’s social behaviour. In other words :

“Socialization is a process of mutual influence between a person and his fellow man, a process that results in an acceptance of, and adaptation to, the patterns of social behaviour.”

Asch has defined socialization in the following words :

“The paramount effect is that man comes into relation not with the objects of nature, but also with other men and that in this encounter they are transformed into human beings. The environment of others and the products of their labour becomes a powerful, comprehensive region of forces within which each individual moves and has his being. Here each person discovers the existence of the character of human beings and becomes bound to them; here he discovers the reality of his own self, and of work, art and thought.”

Prof. Green has said that socialization is that process through

which a man develops into a social being. Similarly, Prof. Neumeyie

said that socialization is nothing but developing of an individual into a social being. Bogardus has in this regard, said that “Socialization is the process whereby a person learns to behave dependency together on behalf of human welfare and in doing so experience social control, social responsibilities and balanced personalities.” VV. Akolkar has also defined socialization as a process which brings out certain changes in the human personality. He has in this regard said, “The process of adoption by the individual of the conventional patterns of behaviour is described at his socialization because it occurs on account of his integration with others and his exposure to the culture in man, which operates through them.” Gillin and Gillin, have again treated Socialization as a process. They have in this regard said, “By the term socialization we mean the process by which the individual develops into functioning member of the group, acting according to its discipline, conforming to its moral, observing its traditions and adjusting himself to the social situation he beets sufficiently well to command the tolerance, if not the admiration of his fellow.”

Socialization as a process. The definitions given above show that Socialization is nothing but a process. It is a process of change and development. It begins from the date the child is born. As soon as the child becomes active, the process of socialization starts. It is this process that leads to the development of an individual, physical and mental trait are not sufficient until those traits grow along with other social qualities. Prof. Green, Neumeyer, Fitcher and Bogardus have drawn our attention to this very aspect of the development.

Kimball Young and Socialization. Kimball Young is one of that scholar as well who treat and believe that Socialization is a process of learning. Along with those he has also accepted that it is an internal process or inter-actional process or social process. This is what he has observed, “Socialization … will mean the process of inducing the individual into the social and cultural world; of making him a participant member in society and if various groups and inducing him to accept as the norms of the values of that society.” He has further said, “Socialization is definitely a matter of learning and not of biological

inheritance.” It means that the individual learns the folkways, more laws and other features of his cultures as well as the skills and other necessary habits which enable him to become a functioning member of the society. He learns to identify himself with the aims and values of his family, neighbourhood, class and community. He may likewise develop a competitive and oppositional response of his own in-group with regard to various out-group. In short, the whole process of socialization falls within the scope of inter-action or the social act.”

Some of the scholars have laid greater stress on the interactional or social process of the development. As a result of this social process, the behaviour patterns are formed. It is through this feature that brings about the mutual influence between a person and its fellow-men. It is due to this process that individuals accept and adapt to the patterns of social behaviour. It is in fact in the words of Bogardus, the process of working together of developing group responsibility, of being guided by the welfare needs of others. In fact, socialization has positive as well as negative aspects. Some have laid greater stress on positive aspects while others have laid stress on negative aspects of the Socialization. In fact, both of these aspects are important. That is why both of them have to be kept in mind while discussing other aspects of socialization.

Kimball Young while talking about the nature of the social process, has said that the words socialization is used in three different, but connected senses : (1) In the wider sense this term is used for all those activities through which man gets acquainted with the socio-cultural world, (2) In the comparatively narrower sense this world indicates ‘social training of the children and is treated to be a part of child psychology. (3) It is also used but indicates ‘social learning’ which is connected with the moral training of the children as well as Youngman.

Process of Socialization. The definitions and the study of

socialization makes it clear that socialization is, in fact, a process. How does the process of Socialization take place as an important matter to be studied?  In fact, this process starts from the very birth of the child. But at that time he lacks the essential elements of the social life. as he rows, he changes and moulds himself according to the standard, and the needs of the society. He identifies himself with the society also. Values, norms, way of life, instants, etc., continue to be imbibed by him. In short, we may say that at the time of birth the child has only natural instincts, but his natural instincts, later on, develop according to the needs of the society. This process of development is nothing but the process of Socialization. How does this process of socialization take place can be studied from the following points :

. 2. Sympathy. Sympathy is a very important factor in socialization. It influences the social development of the child very much. In childhood, a child needs the help of so many, persons. He is rebellious, If the parents provide with his sympathy, he acquires self-confidence and also develops the attitude of identifying himself with the family and the society.

social teaching. According, to Miller ‘Dollard’, this social teaching is based on the following four elements : (1) Drive, (2) Cue, (3) Response. and (4) Reward. In fact, the child has certain needs and he tries to fulfil those needs and makes attempts for them. Sometimes, he repeats those performances as a result of which he learns certain things.

(1) Development of social qualities. When the child is born, the does not have social qualities, but through socialization, he is encouraged to act according to the accepted values and ideals of the society. The society rewards the child for acting according to its established ideals and punishes the child if he acts against those accepted values. Due to the development of social qualities, he is able to solve the problems and grow up into a good social citizen. But if he is not able to acquire these modalities, he becomes an anti-social being. This socialization also influences adult behaviour.

(2) Learning of social ways. The child when he is born is more concerned with biological needs. He demands food and gets it. But man’s entire behaviour and life are not limited to the fulfilment of the biological needs. He has to acquire certain social needs as well. these social needs are fulfilled due to the process of socialization. How should a man earn, how should he live, is a matter than he learns?