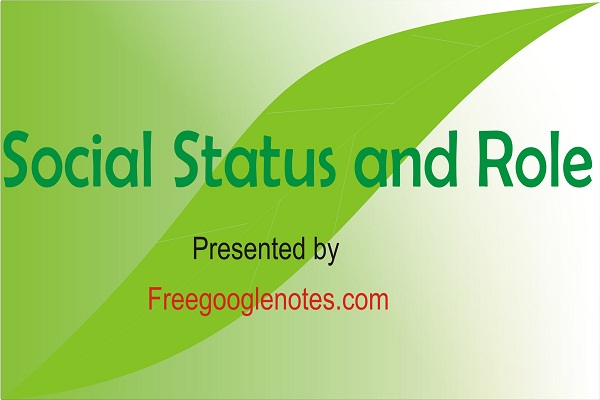 which may help you in your exam preparation or you want to learn about social status and role.

The social status is of much importance for the individual. Marriages in almost every society depend upon social status. It is common knowledge and an everyday occurrence that many marriages are not contracted simply because of differences in the social status or In the financial condition of the parents of the boy and the girl. Everyone

An increase in the individual’s social status entitles him to more respect than before irrespective of whether this increase or improvement is due to marriage, or the acquisition of skill in some art of knowledge or due to his having moved into some higher office. The roles of an individual also change along with his social status. Different roles are conjoined to different social status.

Actually, the very object in having differences in the status within society is to facilitate the division of work among people according to their ability.

Kingsley Davis correctly observes, “Social inequality is thus an unconsciously evolved device by which societies insure that the most important positions are conscientiously filled by the most qualified persons. Hence, every society, no matter how simple, or complex, must differentiate persons in terms of both prestige and esteem.”

At some places, social status grants prerogatives even in the eyes of the law. For example, in England, no one can file a suit against the royal family and in case some involvement does occur the member of the royal family is always above the commoner. In ancient India, the same crimes were punished differently, depending upon the caste of the criminal.

In this way, the individual gets many direct and indirect advantages from social status. This constitutes the importance of status as the basis of social organisation.

The Concept of Role

Historically speaking, the concept of the role was first introduced by Pareto in 1916. It was he who first recognized the sociological significance of the labels such as lawyers, physicians, engineers, artists etc., which indicate their roles. For Pareto the recognition of labels was a step in the special analysis of social elites.

In 1920 Max Weber more generally and explicitly analysed the methodological issues involved in the classification of human beings. He pointed out that the understanding of the origin of a society must be preceded by a functionally oriented investigation. It is necessary to know as to what kind of typical action leads to such classification.

From 1925 onwards the term role was and more used by the American sociologists such as W.I. The Burgess and others. The first explicit formulation of the term role advanced by George Mead in his book Mind, Self and Society published

in1934. Ralph Linton formulated the concept in anthropology in his hook The Study of Man, in 1936. Since then the term role is being widely used by anthropologists, sociologists and psychologists.

A most systematic treatment of this concept has been presented by Talkot Parson, Shils and Balesand in their work Working Paper in the Theory of Action, published in 1953. Though some psychologists have demanded the invention of a better term in place of the concept of role, it has not been actually done so far.

According to T.M. Nessvomb, “the concept of role is not very suitable because of its dramatic and literary connotation and the figure-of-speech use it encourages.” S.F. Nadel shares Newcorob’s misgiving about the loose and confuses of the term role. He, therefore, devotes himself to the analysis of the problems of role analysis.

(1) “Social roles are part and parcel of an individual’s behaviour when interacting with other people in various situations. Every social situation has a role expectancy for us to fulfil.”

(2) “A set of expectations and behaviours associated with a specific position in a social system.”

(3) “A role represents the dynamic aspect of a status … When he puts the rights and duties which constitute the status into effect he is performing, a role. Role and status are quite inseparable, and the distinction between them is of only academic interest.”

(4) “As already indicated, the role concept is basically a type of class concept. Like the class concept of Logic, it labels and brings together numbers of individuals, human beings in out case virtue of certain properties they have in common.”

(5) “Ex definitions” the role concepts has to do with behaviour or differential behaviour, and the characteristics constituted by it.”

(6) “There are no roles without statues or statuses without roles, role representing the dynamic aspect of status.”

(7) “The role is status translated into action, the role being the processual aspect of status, as status is the positional aspect of the role.”

Explaining the importance of the concept of role S.F. Nadel has pointed out, “Its usefulness, in simplest terms, lies in the fact that it provides a concept intermediary between ‘society’ and `individual.

It operates in that strategic area where individual behaviour becomes Social conduct, and where the qualities and inclinations distributed over

According to S.F. Nadel, the role concept is basically a type of class concept. It labels and brings together a number of individuals. It always refers to existing real human beings. These human beings are classified broadly

Q.2. Write a short note on- Role and Status.

A role must have a helo effect, without it is reduced to a label or category. An example of this helo effect in a role is the concept of a bureaucrat. This is true about a role in the full sense of the term. However, certain terms bearing the label of roles might be in fact what Nadel calls, “Non-roles or near roles or Quasi roles.”

These have been further defined by him. As he points out, quasi roles may he name uş status. Thus status can be elaborated into roles and roles have a foundation in status. Most of the writers have accepted that roles and status are complimented concepts. Nadel, however, does not agree that the two are interdependent.

Role behaviour is something translated into action. This translation, however, is not all at once, or in a piece. Rather, roles are enacted face by face, occasion by occasion, in a process extending over time. It is translated attribute by attribute. Role behaviour is materialised is interaction settings or situations.

Nor does this distinction seem to be relevant any other respect apart from its bearing on role perception.”

The attributes describe the internal structure of roles. Different attributes are not equivalent. The attributes concerning roles, according to Nadel, may be classified into the following three main grades:

(1) Peripheral attributes – These are the attributes whose variation or absence does not affect the perception or effectiveness of the role. Thus they are optional and admit alternatives.

(2) Sufficiently relevant – These attributes are firmly entailed in the roles: Their variation or absence makes a difference to the perception or effectiveness of the role by making it imperfect or incomplete.

Q.3 Define the role and bring out the different criteria of role differentiation in society.

Explain the Functions of Role differentiation.

Ans. Role refers to the part played by an actor in a particular context. In drama, we speak of the role of a king, servant etc. In life also we have to play different parts in our relations to society. Thus we are fathers, mothers, sons, teachers, employers etc. A person may have to play several roles at the same time in his day-to-day dealings in society such as of a father, son, employer, buyer etc.

The structure of role differentiation in any society is concerned with the structure of distribution of the members of the system among the various positions and activities in the system. A minimum number of role differentiation is a prerequisite for any society’s survival because these are activities in a society which must be performed by certain designated members at a time.

There are nine types of role differentiation in any society. They are :

In the above post, we covered completely about Social status and role.