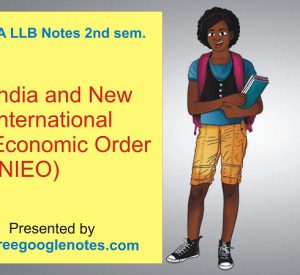 Ever since her independence, India has pleaded for a democratization of International political order and restructuring of the economic system evolved in the post-world war II period. This was considered vital by the Indian policymakers for the economic and social upliftment of the Indian people. For the attainment of these objectives India tried to forge new links and tried to revamp the old links by gradually changing economic relations. India sought to promote international economic cooperation on the basis of equality and mutual benefit and initiated steps to usher in New International Economic Order. India pleaded for ending the exploitative features of the present economic system which was dominated by the rich and developed countries and evolving a system that was conducive to the socio-economic development needs of the developing countries. It is noteworthy that the Indian representatives played a vital role in getting the General Agreement on Trade and Tariff (GATT) rules amended and secured permission for the developing countries to bypass import restrictions with a view to improving their export potential. In fact, ever since the sixties, India has been strongly pleading for the creation of new international economic order at various forums like the United Nations. NAM, Third World Conference, Afro-Asian solidarity Conference, etc. It shall be desirable to briefly review the efforts made by India to further the cause of the New International Economic Order.

As noted above in the sixties, India at the meeting of the Trade and Development Board insisted on the adoption of an integrated international policy for raw material and commodities to ensure a just and equitable relationship between the prices of imports and exports of developing countries the right to impose import restrictions with a view to improving their export potential.

In the UN also India consistently continued to support the demand for increasing the role and share of the developing countries in the international economic order. At the Sixth Special Session of the General Assembly in 1974, India’s Foreign Minister (Sardar Swaran Singh) suggested.

(i). A comprehensive policy for the repolarization of prices of raw materials.

(iii). The equitable pattern of voting rights in IMF and other international of developing countries; and

(iv). Provision of external capital for the development of developing countries; and

At the Seventh Special Session of the UN General Assembly held in 1975 also India’s Foreign Minister (Mr. Y. B. Chavan) put forth the following suggestions for the establishment of NIEO.

(i). Only through voluntary transfer developing countries can acquire a sort of buffer between rising bills and falling export earnings. It is a matter of great concern that while official development assistance has barely exceeded 7 billion, the world’s expenditure on the means of destruction has reached staggering proportions.

(ii). Due to the sharp rise in their imports, particularly fuel, fertilizers and manufactures, the import bill of most developing countries has increased to such an extent that even with a 100 percent increase in export earnings, there is no assurance that the balance will be corrected or even halfway met.

(iii). For the production of trade of developing countries, a more managed approach to the problem of trade in manufactures would deal not only with the removal of trade barriers both tariff and non-tariff but also with the question of supply of production, marketing, and distribution.

(v). The conduct of transnational corporations should be subject to greater regulations because they have acted irrationally also in many instances detrimental to the sovereignty and the freedom of developing countries in the management of the resources for development.

India also strove for realizing the ideals of NIEO in the various sessions of UNCTAD. During the session of UNCTAD held at Nairobi in May 1976, India played a vital role in getting the program of global action adopted to improve the market structure in international trade in commodities of interest to the developing countries. On 11 June 1978 India’s Prime Minister (Morarji Desai) said “The road to NIEO Maybe rough, torturous, and long, but it must not be allowed to become a mirage. It was here that countries like the USA have a crucial role to play by giving the lead in the implementation of various decisions aimed at eradicating the poverty and want from the Earth.”

In 1985, India organized a today ministerial-level meeting of the developing countries to consider the Global System of Trade Preference (GSTP) to Promote South-South cooperation. The meeting was inaugurated by Rajiv Gandhi the then Prime Minister of India. In his inaugural speech, Rajiv Gandhi called upon developing countries to work for collective self-reliance through boosting their trade. Realizing that there was very little scope of an airily North-South agreement over New International Economic Order it was felt desirable to promote South-South cooperation among the developing countries as a step towards the evolution of new economic order.

India also played an active role in promoting the idea of the creation of NIEO at the various meeting of Group of 15 (G-15) and played a vital role in its deliberations and decision making At the second summit meeting of G-15 held at Caracas (Venezuela), India urged the developing nations “to seize the historic opportunity provided by the end of superpower rivalry to poor their combined energies and to seek to resolve their problems through South-South cooperation.” The Indian Prime Minister asserted that it was wrong on the part of some developed countries to prescribe in somewhat arbitrary terms what making should do and where it should go after the easing of East-West relations. The third summit meeting of G-15 held at Dakar (Senegal) in November 1992 also India expressed concern over “diminishing opportunities and contracting freedom in the wake of the end of East-West confrontation and pleaded that the developing countries should go in for South-South cooperation in a big way. Again, as Chairman of the Fourth Summit of G-15 held at New Delhi in 1994. India played a significant role in emphasizing the need for South-South Cooperation and holding North-South dialogue so that the interests of the developing countries could be adequately protected in the implementation of the Uruguay Round, In the next two G-15 sunımit held in Argentina and Zimbabwe also India played an active role in promising the idea of greater South-South cooperation. In short, it can be said that India not only played an important role in the establishment of G-15 in 1990 but has also been playing a leading role in ties deliberations and decisions of the group.

It is evident from the proceeding account that India has consistently pressed the need of Now International Economic Order at various international forums and has projected itself as a staunch supporter of NIEO with a view to end the dominance of the International economic system by the rich and to secure an equitable distribution of world income and resources.”