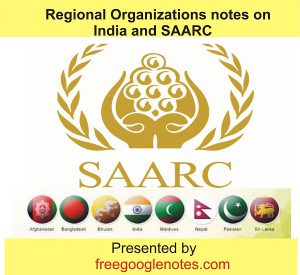 Write a short note on India and SAARC.

Pakistan‘s policy of “hate India” is reflected in all its actions. Pakistan refused to recognise India’s secular character, and cannot forget that Jinnah’s two-nation theory was responsible for the creation of Pakistan. The communal divide is the basis of Pakistan’s policy. It keeps its anti-India propaganda going, on the ground that Muslim-Kashmir must not remain a part of India. Pakistan has tried to raise the Kashmir issue at the SAARC conference, just as it has been trying to bring up this issue in other forms such as Non-aligned Movement and Commonwealth Heads of Government Meetings. It even tried to have India censured in the 1994 Conference on Human Rights in Vienna. The Indian delegation led by Former Foreign Minister Atal Behari Vajpayee convinced the Conference that Pakistan had no case.

The political problems, between India and Pakistan, are rooted in the differing perception of the common past of the sub-continent. This had been vitiating not only the Indo-Pak bilateral relationship but also the SAARC framework.

The most important problem between India and Bangladesh was related to the sharing of Ganga Waters. Yet, the two countries see the imperative of expanding trade relations between them.
SAARC, whose foundation was laid by Bangladesh President, provides a forum to Bangladesh to project itself as a state determined to further the cause of regional cooperation in South Asia.

Nepal’s system of government has changed (1990) from absolute monarchy to constitutional monarch with a multi-party parliamentary democracy. Nepal’s development depends upon how effectively it can profit from the preferential treatment it has received for 200 years from India. Nepal’s cooperative relations with India are a great help on the effectiveness of SAARC While relations between India and Bhutan and India and the Maldives have been very cordial, there has been the ethnic problem in Sri Lanka-India relations. India has played a leading role in the development of Bhutan and has received the fullest cooperation from the tiny country inhabited by 6 lakh people. When in late 1980s coup was attempted in the Maldives. India’s timely help rushed to the Island foiled the coup attempt. The two countries have maintained meaningful cooperation between them. Sri Lanka has been suffering from a violent insurgency. As the ethnic problem is concerned with the Tamil-Sinhalese conflict India is naturally concerned with the ending of insurgency so that friendly relations may be revived. This will help consolidate, the benefits of regional cooperation.

Encouraged by the bilateral talks Prime Minister L.K. Gujral and his Pakistan counterpart Mian Nawaz Sharif during Male Summit (1997), the SAARC leadership agreed in principle on a declaration of political cooperation and stability which might be issued at a later date. The idea was that SAARC summits might be used for greater bilateral understanding, without amending the Charter which prohibits taking up of bilateral issues in a formal manner. Releasing the formal resolution of the 9th summit, Maldivian President Abdul Gayoom hoped that, “…the aims of promoting peace, stability and amity and accelerated socio-economic cooperation might be best achieved by fostering good neighbourly relations, relieving, tension and building confidence” through “informal political consultation” Sri Lankan President Mrs Chandrika Kumartunga also lauded the idea of informal bilateral talks on the pattern of Gujral Sharif dialogue.

From Sapta to Safta

The concept of preferential trading within a group of countries is behind the creation of the South Asian Preferential Trade Agreement (SAPTA) in 1995. It is a stepping stone towards an eventual free trade arrangement within South Asia. As early as 1959, a European Free Area (EFTA) was created by a treaty signed by the United Kingdom, Sweden, Norway, Denmark, Austria, Portugal, Iceland and Switzerland. The conceptual basis of EFTA was a block of countries who Would trade among themselves free of custom restrictions. A zero-custom arrangement promotes greater trading, without restriction, within the specific area. A free trade area benefits all the member countries who constitute such an area. In the early 1990s, NAFTA or North American Free Trade Area was established to remove trade barriers between the United States of America, Canada and Mexico, it has been realised all over the world that free trading at the regional level is in the interest of economics of the countries concerned. SAPTA was established in the hope that by the first decade of the 21st century a South Asian Free Trade Area would become a reality where, as P.V, Narasimha Rao, the then Prime Minister of India (1995) said, there would be zero-custom trading in South Asia.

The international trading system is facing new challenges. With the emergence of new regional trading blocs across the world, the South Asian countries are faced with a tight position on the export front. According to Professor Vijaya Kathi of India institute of Foreign Trade, about 50 per cent of world trade was confined in 1996 to the trading blocs and intra-regional trade activity. But, “there has been a consistent decline in South Asia’s share is only 3 per cent of its total imports and 4 per cent of its total exports, which means that SAARC 96% to outside this region. This is depressing. In the trade field, South Asia has been described as lagging “behind every other area in the world in constructing explicit, cooperative arrangement.” There is a possibility of developed countries imposing new trade restrictions on South Asia. Besides, with the setting up of the World Trade Organisation (1995), South Asian countries were likely to face difficulty in having access to the developed world, which had been major trading partners of these countries.

Trading within_the SAARC region has become necessary as aid flow slow down. If South Asia does not receive aid as it has been receiving in the past, its economies are likely to be adversely affected. Therefore, “economics of the neighbourhood” can act as the foundation stone of building up satisfactory international economic relations. Lack of capital within the SAARC region has also posed a serious problem for any meaningful regional cooperation. The bilateral political issues between member countries, such as Kashmir and sharing of river waters, are hindrances in the path of smooth trade relations.

A document to set up the South Asian Preferential Trade Agreement (SAPTA) was signed by the minister of member-countries on April 11, 1993, during a summit at Dhaka. The initiative for the establishment of SAPTA was taken at the SAARC summit at Colombo in December 1991. This agreement has been described as “an umbrella framework of rules providing for step-by-step liberalisation of trade within the region. It provides for a periodic round of trade negotiations for the exchange of trade concessions on tariff and related matters.” SAPTA contain provisions for favourable treatment to be given to the least developed countries in the SAARC region.

A regional seminar held in Kathmandu during 1994 determined certain salient points for SAPTA. These were:

The SAARC Council of Ministers (Foreign Minister’s Conference), as well as Foreign Secretaries of the seven countries, met in New Delhi in December 1995 to complete formalities of the functioning of SAPTA. The ratification documents were submitted. It was expected that the discussion would soon be to replace SAPTA with a South Asia Free Trade Area (SAFTA) by the beginning of the twenty-first century. This will mean that trading among the South Asia countries (as in EFTA and NAFTA) will become free from custom restrictions and duties. There will be a free flow of goods within SAFTA if achieved.

Meanwhile, it is essential to effectively implement the already established SAPTA for preferential intra-regional trading. In December 1995 at the New Delhi meeting, all SAPTA countries exchanged lists of 106 items that should enjoy duty concession for preferential trading within SAARC. This list of 106 items is more than three times. Nepal offered 14 items, Maldives 17 items, Bhutan 7 and Bangladesh 12 items for trade on preferential rates of duty with other SAARC countries. SAPTA countries are facing two major problems. First, there is a vast difference in the number of items notified by different member countries to be covered by preferential trading. Second, most of the items in most of the lists exchanged for preferential trading, either do not have a demand in the potential importing countries of the region, or the items are such that they do not have an exportable surplus that could be traded within SAPTA after domestic needs are met and after exports to the developed countries generating hard currencies have been made.

There is yet another problem, but that is essential of political nature. It relates to the demand by Pakistan and Bangladesh that political disputes between India and these two countries must be resolved before any meaningful economic cooperation can take place. Pakistan Foreign Minister Sardar Asif Ali and his Bangla counterpart Mustafizur Rehman both argued in December 1995 meeting that despite their obligations under World Trade Organisation (WTO) they would not be able to respond to India till Kashmir and Farraka disputes were resolved. As already mentioned SAARC Charter clearly prohibits discussion on bilateral issues, yet surprisingly in 1995 even Nepal and Maldives Supported Pakistan’s demand that Heads of Government of SAARC States should examine the possibility of setting up consultative machinery at the official level to regularly discuss pending bilateral issues and to evolve possible solutions. This linking up of bilateral disputes like Kashmir with economic cooperation would weaken, rather than strengthen, regional cooperation in South Asia. If SAARC has to succeed it is imperative in South Asia, If SAARC has to succeed it is imperative that all seven countries concentrate on economic development in the entire region, discourage tensions and promote mutual understanding.

India has become a “sectorial dialogue partner” of the Association of South-East Asian Nations (ASEAN) in 1991. This initiated, as former Foreign Secretary J.N. Dixit said, “the process of cooperative linkages with this important regional grouping.” Sectorial dialogue partnership meant that India was allowed limited cooperation in areas that ASEAN permitted. These areas were culture, tourism and certain categories of trade. In 1994, science and technology were also added. However, in 1995 the fifth ASEAN summit confirmed with India the status of “full dialogue partnership.” This would enable India to have multi-dimensional and comprehensive cooperation with ASEAN. However, there was speculation whether a full dialogue partnership would be withdrawn from India if a nuclear test is conducted by us. As India has no intention of conducting a nuclear test, this speculation had no basis.

The “full dialogue partner” status should be fully utilised by India. As J.N. Dixit said, “opportunities are of dealing with an economically

vibrant market of 360 to 400 million people…” However, ASEAN docs not yet have common agriculture. SAARC itself is going through the preliminary stage of evolution as an effective economic unit.

Once SAPTA starts working effectively, the establishment of SAFTA be facilitated. India’s Commerce Security Tejindra Khanna said in late 1996 that the free trading in EFTA could be a model for proposed SAFTA whose scheduled framework was between 2000-2005 A.D. SAARC had in principle agreed to create a free trade area (SAFTA) but a number of problems will have to be overcome. These problems include the issue of trade imbalances and the lifting of non-tariff barriers (such as transit restrictions). Pakistan refusal to grant “most favoured nation” status to India and demand by smaller economies for a level playing field are other issues to be tackled for effective change from SAPTA to SAFTA. Meanwhile, a business community led by trade union bodies and chambers of commerce and industry of SAARO countries are keen on an early introduction of free trading in the region. Therefore, as Commerce Secretary Khanna opined it is “the duty of the government in these countries to facilitate the creation of free trade area in the region.”