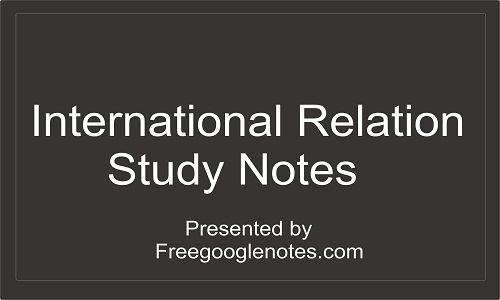 Q.2. What is the meaning of Balance of power? Point out its characteristics.

1. Ordinary Meaning. In the ordinary sense, the balance of power

means that there is a rough equilibrium of power between various nations. This concept of equilibrium has been taken from the field of mechanics. It implies the ‘equilibrium of the type represented by a pair of scales.’ If the weights in the scales are equal the balance results.

2. Palmer and Perkins. Applied to international relations, the concept of balance of power means “that through shifting alliances and countervailing pressures, no one power or combination of powers will be allowed to grow so strong as to threaten the security of the rest”. (Palmer and Perkins).

3. Prof. Fay. In Encyclopedia of the Social Science Prof. Fay defined the balance of power as “just equilibrium in power among the members of the family of nations as will prevent any one of them from becoming sufficiently strong to enforce its will upon the other.”

4. George Schwarzenberger. The balance of power is “an equilibrium or a certain amount of stability in international relations.”

5. Hartman. “The balance of power may be described as a system in the sense that one power bloc leads to the emergence of other and it ultimately leads to a network of alliances.”

6. Lord Castlereagh. The balance of power is “the maintenance of such just equilibrium between the members of the family of nations as should prevent any of them becoming sufficiently strong to impose its will upon the rest.” In practice, however, in the name of a balance of power, the nations have usually preferred preponderance of power. Nicholas J. Spykman observes: “The truth of the matter is that states are interested only in a balance which is in their favor”

7.Quincy Wright. “It is a system designed to maintain a continuous conviction in any state that if it attempts aggression it would encounter an invincible combination of the others.”

8. Morgenthau. “It is an actual state of affairs in which power is distributed among several nations with approximate equality.” Morgenthau attached lour different meanings to the term. These are the following:

1. As a policy aimed at a certain state of affairs at bringing about certain power distribution.

9. E. B. Haas. Earnest B. Haas has mentioned the following four uses of the term :
1. As description;
2. As propaganda and ideology;
3. As prescription
Haas gives eight different interpretations of a balance of power. These are the distribution of power, a bałance or equilibrium, hegemony or imbalance, stability and peace, instability and war, power politics, a universal law of history, and a system and guide to policymakers. According to the intention of the users, it is employed simply to describe, as propaganda, to analyze, or to provide a guiding principle for those who make foreign policy decisions.

Concluding Remarks
To conclude, Balance of power means the following:
1. Description. This indicates the character of the situation in which the power relationship is roughly equalized, eg, when one group is referred to as having the balance of power in relation to their groups.

2. Policy. When identified as a policy, a balance of power means that unbalanced power is dangerous. Thus as a sage guide to policy in a multistate system, the undesirable behavior of other states could be prevented only by confronting power with counteracting power.

Characteristics of Balance of Power

1. Constant Change. The balance of power is subject to constant change-from equilibrium to disequilibrium.

2. Achieved. Balance of power is not a gilt to God. It is achieved by the active intervention of men. No state can wait for long to allow the balance of power to establish automatically.

3. Dynamism. To preserve a balance against the growing preponderance of power, a state must be ready to go to war. Balance of power favors the ‘status quo’ but to be effective, the policy must be a changing and dynamic one.

The statesman will say that there is a balance when he thinks that his side is stronger than the other. Hence nations which play the balance of power game seek not a balance, but an imbalance-in their favor.”

7. For Big Power only. The Balance of Power game is meant for big powers only. The small powers are like weights in a balance used by others.

8. Need of Balancing Power. To keep the balance, it requires a balancing power for the successful operation of the system.

In the above post you have read International Relations study notes