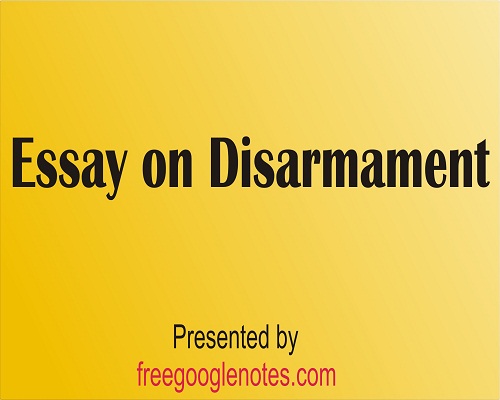 In this post you will read International Relations Notes pdf

Q. 1. Write an essay on Disarmament.

(1) General and Local Disarmament : In General Disarmament all or most of the great powers participate. Examples are the Washington Treaty of 1922 for the limitation of Naval armaments, signed by all major naval powers, and the World Disarmament Conference of 1932. We refer to Local Disarmament when only a limited number of nations are involved. The Rush-Bagot Agreement of 1817 between the United States and Canada as an example of this type.

abolition on only certain special types of armaments as was discussed by the Atomic Energy Commission of the United Nations.

(3) Totał Disarmament : Total disarmament aims at complete elimination of armament. There would be no weapons of any kind whatsoever.

(1) The Prevention of War and the Establishment of Peace: According to Morgenthau, “It is believed that, by doing away with one of the typical manifestations of the struggle for power on the international scene, one can do away with the typical effects of that struggle international anarchy and war:” Disarmament is considered to be the most effective means of preventing war and guaranteeing peace. lt is. commonly believed that unless there is disarmament, war and destruction cannot be checked. The only direct cause was according to the disarmament approach is the existence of armaments. It is argued that war results from armament and, therefore, it can be checked only by disarmament. Thus the belief that arms cause war is fundamental to the theory of disarmament. The massing of armaments and their instant availability make war probable and feasible or, as Claude asserts, even tempting for statemen to plunge into war.

The theory of disarmament proceeds on the assumption that by limiting armaments the nations would be deprived of the very means of fighting. When a nation increases its military strength, other nations develop feelings of fear and insecurity. This leads to belligerence on the part of other nations and they also seek to increase their military strength. Thus develops a war hysteria. Sometimes in anticipation of an attack, a nation itself attacks and resorts to preventive war, but in fact, such a nation is acting in self-defènce. Armaments make the national outlook aggressive and militaristic. While the armaments encourage conflict and war, it would be incorrect to argue that it is the sole cause of war. Complete disarmament would, however, lead to peace by eliminating the very means to fight.

(2) Nuclear Threat : The throat of nuclear weapons and even a very remote possibility of a nuclear war have made the problem of disarmament a the more important nuclear war wilL Icad to total (destruction. Disarmament is suggested as the only way to save humanity from destruction.

(3) Economic: A very important argument in favor of disarmament is economic. The resources which are allocated for military purposes by the nations are a broad indication of what is denied to other avenues of public and private expenditure. If nations had not expanded their means for military purposes, they could obviously have put the resource, So consumed to many other uses. The military expenditures affect both immediate consumption as well as future economic growth. The path of economic growth is barred. The nations are deprived of the mutual economic aid they could otherwise receive from one another.

(4) Social: The economic case for disarmament is closely linked with the social case. Military cxpendítures also have profound social consequences. The problem of poverty, hunger, diseasė, illiteracy, housing and that of raising the standard of living is not coníined to the developing countries. These problems in some measure are also present in rich countries. Military expenditure absorbs resources that would otherwise be released for providing social services. The military expenditure for the word as a whole is about two and a half times the estimated total! of the publicity financed health expenditure. A rough calculation suggests that all medicał research in the world consumes only about 4,000 million dollars as compared to some 25,000 million dollars spent on the military. research and development. Nuclear tests and explosions arc having their polluting effects on the physical environment and thus bring environmental devastation.

(6) Psychological: A war condition has a strange psychological influence over the minds of the people. Everybody feels that he lives

in a world in which violence has become commonplace, and which is Stocked with sufficient lethal power to wipe out entire mankind. This awareness has helped to create a psychological background of uncertainty, fear, and anxiety. Some western social psychologists have Apresscd the view that the arms race and horrors of war have developed a belief in the younger generation that the world is an irralíonal place in which the improvement of society is a hopeless cause

Hindrances in the Way of Disarmament

(1) The problem of disarmament is closely related to the problem of security. International tension and the mutual fear among the nations, develop in them a feeling of insecurity. So long as the nations arc not assured of their security any efforts for disarmament would meet with
failure. No guarantee can be provided to nations in view or the nature of the present international society. In a condition like this, every nation is bound to depend upon its own power for its security.

(2) Another hindrance in the way of disarmament is the fear and mutual distrust. As a result, every nation views with suspicion the disarmament proposals put forth by others. Every nation feels suspicious about the intentions of other nations that while it may affect a reduction in its armaments of others may not do so. This mistrust functions in two ways, it hampers initial agreement and it might lead to the breakdown should a disarmament scheme be put into operation.

(4) The developments alter the Second World War divided the world into two blocks, and that gave birth to the so-called “cold and war. Every nation is concerned about its security because of an unstable balance of power. Armaments are the result of certain psychological factors.

(5) In the realm of armaments the superpowers have achieved the maximum limit. In other words, they have, gained such potential. capacity in armaments that it would not be worth-while to go further.

(6) One important hindrance in the way of disarmament is with regard to the ratio among the armaments of different nations after a reduction in the armaments has been effected. Every nation wants to be superior in armaments to others. This question is always the first

Armaments arc the result of many causes. It is no problem in itself. Armaments are only a means of war. War also is not an independent thing in itself, but only a part of political intercourse. We have, therefore, to find out the solution of the problem of disarmament not in disarmament itself but in the political behavior of nations. lf we can stop. the possibilities of war, there will be no need of armaments and, as such, the problem of disarmament would not arise. The world based on power politics is as it is and we are only to face disarmament being regard system prevails, then armament has a utility. So long as it, has utility, so will armament survive and the greater the utility, the greater will be the armaments. So long as the force remains a décision factor in international politics, the arms race among the nations is bound to continue. We are unlikely to have armament places not non-competitive. basis unless we first demote force from its decisive role. All the hindrances in the way of disarmament directly to the realities of international politics and the present international system.