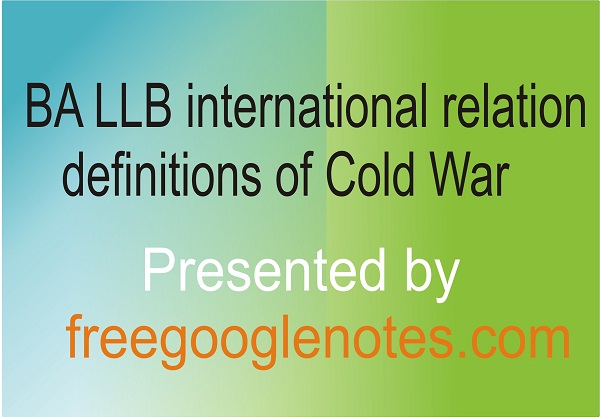 Q.2. “The Cold \War, which dominated the relations of the Western World and the Soviet bloc during the two decades following the Second World War has been fought primarily with the weapon of prestige.” Discuss.

The term ‘cold war‘ was first used by an American statesman Bernard Baruch. In a speech to South Carolina legislature on April 16, 1947, he said: “Let us not be deceived, we are today in the midst of a cold war.” Walter Lippmann popularised the term in 1947 with his little book entitled Cold War wherein he described the situation that had arisen between the Western powers and the Soviet Union. The Western powers and the Soviet Union had come together to fight against the Axis aggression during the Second World War. However, their

relations were suffering from an undercurrent of mutual distrust and jealousy.

The Soviet Union had harboured the suspicions about Anglo American moves due to delay in opening the second front during the war to relieve German pressure on Soviet front, the secrecy maintained over the atom bomb, and the denial of invitation to the Polish provisional government to San Francisco.

On the other hand, the West had entertained the feeling that Russia had annexed considerable territory by waging war against Japan at the last moment. Thus, the mutual distrust had led to sharp rivalry as soon as World War II came to an end. This war cold war was defined by Florence Eliot and Michael Summerskill as a state of tension between countries in which each side

adopts policies designed to strengthen itself and weaken the other dine falling short of actual hot war” The cold war has been a predominant 1actor in determining the conduct of international affairs in the post-Second World War period.

1. Struggle for Power in the 19th Century. In his book Struggle for the World Desmond Domelly said: “The cold war has its origins in the struggle for power in Central Asia between the rival imperialism of Britain and Russia in the Nineteenth Century. There was that strange period of history known as the “Great Games” when names such as Samarkand and Bokhara were the traditional doctrine of mutual suspicion-even before the Red Flag floated over the winter palace on a cataclysmic day in 1917.”

2. Second Russian Revolution of 1917. In his book The Cold War Retrospect and Prospect, Frederick L. Schuman opined that “At all events, what we have seen the ‘cold war did not begin in 1945, in the aftermath of. World War II and of the Yalta and of the Potsdam conferences. In a broader sense, it began with the second Russiän Revolution of, 1917.

within ten months after Russia’s October Revolution, the Soviet Union and the West were at war. And the war was not a cold war but a hot war, marked by many casualties and vast destruction. Be it remembered, lest we forget what the Russians never forget, that this war was begun by communists sending armies against Soviet Russia. The legacy of mutual fear and suspicion and haired which nourished the cold war of the 194Os and 50s originated in the hot war between East and West in 1918-1921”

3. Churchill’s Speech of 5 March 1946. In Soviet bloc the cold war was officially regarded’ as a unilateral attack by “capitalism” and imperialism” of the socialist countries, and where “socialist warriors were regarded as anti-communist” “hawks”. Some official Soviet versions of the cold war would attribute the origin of the cold war in Churchill’s Fullon speech of 5 March 1946, wherein he said: if the Western Democracies stand together in strict adherence to the principles of the United. Nations. Charter, their influence for furthering those principles will be immense and no one is likely to violist them. It, however, they become divided or fail in their duty and if these ail important years are allowed to slip away, then indeed catastrophe may overwhelm, us all.”

4. Post-Second World War Phenomena. There is no precise consensus among the scholars about cither its essential nature or the

time and circumstances of its origin. Paul Seabury in his book The Rise and Decline of the Cold War holds that to “date its origin is to suggest its central meaning”. The Majority of authors treat the emergence of the cold war as a post-Second World phenomenon.

Russia had emerged as a power to be reckoned with in Europe at the Bolshevik Revolution of 1917. The Western powers had initially refused to recognise the Bolshevik government in Russia. Before the beginning of Second World War, Soviet Russia had missed many opportunities where it could bring the Western powers together under SO-called security system and to a disarmament programme within and outside the framework of the League of Nations. Russia frequently” denounced the policy of appeasement pursued by America. Britain and France towards Germany.

During that period the cold war was in an embryonic stage. With the advent of the Second World War, Soviet Russia started cooperation with the Western countries. This did not help in maintaining mutual distrust and suspicions. The differing war aims of the two powers also greatly contributed to the growth of cold war. The Soviet Union was keen to ensure her future security by partitioning Germany and by creating a buffer zone of friendly East European countries. On the other hand, the United States was keen to restore the conditions necessary for prosperity ensuring that a destructive depression did not recur.

Soviet Union refused to open the Black sea straits and the Danube as international waters, due to her fear that it would pave the way for US commercial penetration on Soviet Eastern Europe. Declaring cold war his Westminster College (Fulton) speech on 5 March 1946. Winstton Churchill said, “A shadow has fallen upon the scene so lately lighted by the Allied Victory.” Nobody knows what Soviet Russia and its Communist international organisation intend to do in the immediate future. From Stettin in the Baltic to Trieste in the Adriatic, an iron curtain has descended across the continent.” Emphasising the need of Anglo-American alliance Churchill maintained that the Soviet Union understands only the language of force.

Following UK’s withdrawal, on the plea thạt, if the United States did not fill the vacuum left by British departure, the Soviet Union would also contribute to the cold war the U.S. decided in 1947 to remilitarise Greece. President Truman said: “T believe that it must be the policy of the United States to support the free people who are resisting attempted subjugation by armed minorities and by outside pressure … If we falter in our leadership we may endanger the peace of the world and we shall

surely endanger the welfare of this nation.” Due to this attitude of the United States, the Soviet Union became reluctant to withdraw from Eastern Europe. The Soviet Union felt that by continuing to occupy Eastern Europe, she would at least negate any threat of nuclear aggression. The above developments led to an aggravation of cold war. Cold war estranged relations between the Soviet Union and Western powers.

1. Mutual antagonism. Sonic scholars hold that the mistrust and the consequent fears were the basis of this cold war. Mutual fear and suspicion product hostile interaction between two parties, but neither of parties were willing to 1ake any initiative to reduce tension. The diplomacy of co-existence and the rise of neutral nation as in Asia and Africa contributed to the dampening df the cold war. However, it was kept alive by the fear of the capitalist world about the ultimate motives of Soviet expansion and the fear of the communist countries that the imperialists were determined to destroy communism. Both the capitalists and the communist kept cold war alive.

2. Ideological Incompatibilities. The U.S. Secretary of State James f. Byncs contended that “there is too much difference in the ideologies of the USA and Russia to work out a long term programme of cooperation.” The expansionist and crusading Communist ideology was intent upon converting the entire world. Communism was essentially totalitarian and anti-democratic. Therefore, it posed a real threat to freedom and liberty throughout the world. President Eisenhower said We face a hostile ideology global in scope, atheistic in character, ruthless in purpose and insidious in method.” Therefore, the United States embarked upon a crusade to eliminate the communist ideas from the globe. Thus cold war was a “battle for the allegiance of men’s minds” on the pattern of religious wars of past.

3. Mutual Misunderstanding. According to sone scholars both the parties saw in their own action only virtue and in the action of the adversary only malice. This gave rise to distrust towards each other. As Keglcy and Wittkoíf said: “This interpretation of the origin of the cold war is difficult to deny, given the perception that became accepted as dogma.”

4. Historiçal Record. The Soviet distrust of American intentións was based upon historical record of demonstrated hostility such as Amcrica’s intervention in Russia in 1918-19; refusal to establish diplomatic relations till 1933; American refusal to inform the Soviet Union about Manhattan project to develop atomic bomb; hçr delay in sending the Soviets promised Lend-Lease support; and her failure to

Open up the second front which made Stalin suspect that the American policy was to let the Russians and Germans destroy each other so t U.S.A. could then pick up the pieces from among the rubble, and fina the use of the atomic bomb against Japan.

On the other hand, USA nourished hostility towards the Soviet Union due to growing Soviet belligerence; Russian’s unwillingness to permit democratic elections in countries liberated from the Nazis; their refusal to assist in post-war reconstruction in regions outside Soviet control their maintenance of an unnecessarily large armed force, after war Stripping of supplies fronı Soviet areas of occupation; obstructive behaviour in the new international organisation, and finally their anti-American propaganda.