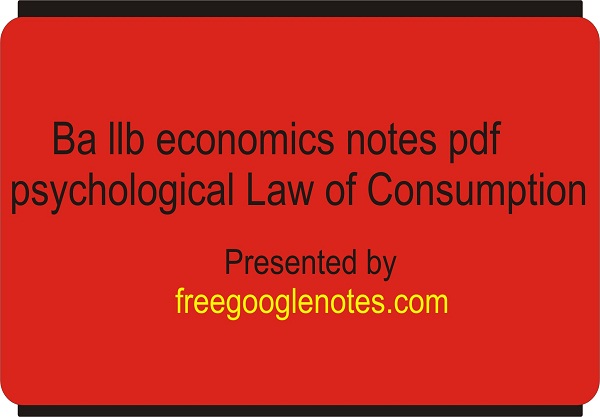 Q.3. State and explain Keynes Psychological Law of consumption.
*What are MPC and the APC and how do they differ?
*Compare linear and non-linear consumption functions.
*Explain the determinants of Propensity to consume.

It is, however, assumed that by income Kcynės meant the disposable income of the consumer. Keynes designated tendency of consumption varying directly with disposable income as the “Fundamental Psychological Law”.

Açcording to this law, “men are disposed of, as a rule, and on the average, to increase their consumption as their income increases, but not by as much as the increase in their income.”, This law is known as “Propensity to Consume’, or Consumption Function.

(a) When aggregate income increases, consumption expenditures also increase but by a somewhat smaller amount. The reason is that as income increases, more and more of our wants get satisfied and, therefore, lesser and lesser amounts are spent out of subsequent increases in income.

(b) The second proposition is that when income increases, the increment of income will be divided in a certain proportion between consumption spending and saving. This follows from the first proposition because what is not spent is saved.

(c) The third proposition is that. as income increases, both consumer spending and saving will go up. An increment in income is unlikely to lead either to less saving or less spending than before. It Would seldom happen that a person decreases his consumption or his saving with an increase in his income. He would spend more than before and also save more than before.

Assumptions of the Law

Keynes’ Psychological Law of Consumption is based on the following three assumptions:

(a) It is assumed that the habits of people regarding spending do not change or that the propensity to consume remains the same.

Normally, the propensity to consume is more or less stable and does remain unchanged. This assumption implies that only income changes when other factors like income distribution, price movement, growth of population, etc., remain more or less constant. In the short run, these factors are constant or approximately so. In the long run, that may not be true. So the law holds true only in the short period.

(c) The third assumption is that of the existence of a capitalistic laissez-faire economy. The law may not hold good in an economy where the State interferes with consumption or productive enterprise. The government, for instance, may not permit an increase in consumption With the increase in income.

Explanation of the Law

A. Average and Marginal Propensities to Consume

where C is aggregate consumption, and Y the aggregate income of the economy. Formally, we define the average propensity to consume as the ratio between total income and total consumption.

B. Average and Marginal Propensities to Save

The average propensity to save (APS) is the ratio of total saving to total income.