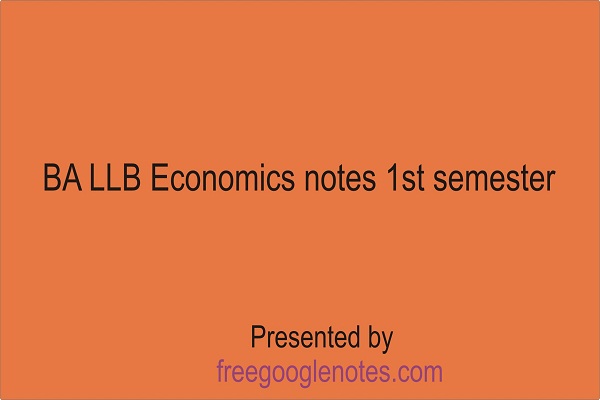 Q. 3. Discuss the trends in National Income estimation in India.
Ans. In India, the first attempt to estimate national income and per capita income was made in the year 1867-68 by Dadabhai Naoroji.(Economics notes )

This was followed by several intermittent efforts by individuals, officials as well as non-official. All these èstimates are at current prices and differ widely in territorial coverage, conceptual basis, method of estimation, and basic data used. They do not provide a series of comparable estimates adequately reliable to study the growth of the Indian economy over the period.

Immediately after Independence, the Government set up the National Income Committee in August 1949 to prepare a report on national income and related estimates, to suggest improvements in the collection of data, and to recommended guidelines for research in the field of national income. The committee comprised three noted economists, Prof. P. C. Mahalanobis, Prof. D. R. Gadgil, and Dr. V. K. R. V. Rao. Sir Simon Kuznets was a special invitee member of the committee.

The First Report of the Indian National Income Committee was published in 1951, and their Final Report in 1954. The Committee made certain recommendations, and as a result of that, the coverage of area statistics was enlarged through surveys and the establishment of reporting agencies in areas where no agency existed before. The Directorate of National Sample Survey came into existence in 1950 to collect additional data required for national income estimation. The task of national income estimates was later on assigned to the Central Statistical Organisation. The CSO has been producing annual official estimates of the national income of India since 1955 and publishing it annually in National Accounts Statistics (NAS). Further, the National Sample Survey Organization and the Research Cells in the Reserve Bank of India and State Income Units in the State Statistical Organisations have been publishing data that constitute a useful supplement to the NAS and aid in the analysis of growth and change in the economy. It is with the help of this data that we shall try to establish the trend in India’s national income over the last five decades.(Economics notes )

India’s National Income and per Capita Incomé at Current Prices 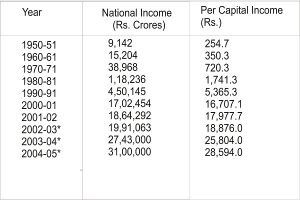 Overall Trends: The rate of growth of the national product during each of the plans is summarised in fig. 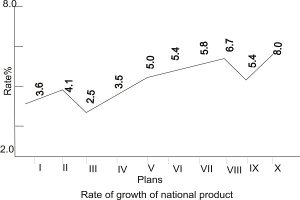 From an overall study of the total period, the following trends can be observed :

(4) Fluctuations in year-to-year growth rates in early stages were very marked, which indicated that the economy had failed to create conditions
conducive to stable economic growth. We depended on chance factors, like a monsoon. Such impressive growth rates as were witnessed in the past were due to chance elements rather than due to planned efforts.

Recent growth has been more robust; it has been less vulnerable to agricultural performançe and to vagariês of the monsoon.

(5) In the initial stage there was a tendency towards an increase in the element of fluctuations over succeeding decades. But it seems to have been subdued now.(Economics notes pdf)

(6) An examination of the annual rates. of change-observed by the three sectors of the economy, primary, secondary and tertiary- further shows that the annual variations are not specific. to anyone sector. Fluctuations are observable in all the sectors, although their order of magnitude.is highest in the primary, sector, followed by the secondary sector and the tertiary sector in that order.