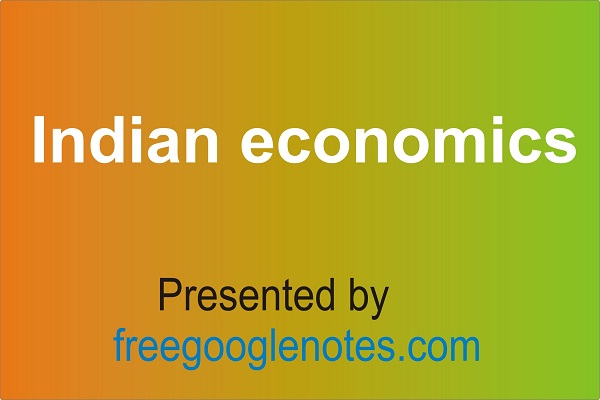 b a llb 1st semester economics notes pdf in english

Q. 1. Elaborate on the main features of Indian Economy with special reference to the structural changes in it in post 1991 period.

Trace the process of transition of the Indian Economy from an underdeveloped to a developing economy.
Ans. During the last five and a half decades a number of significant changes have taken place in the Indian economy. These changes point to the fact that the Indian economy should be called a developing econony.
(1) Sustained Growth: India has emerged as the world’s fourth largest economy with gross national income in purchasing power parity terms of $ 2,691 billion, behind US ($ 10,110 billion), China ($ 5,625 billion), and Japan ($ 3,315 billion). The per capita income figure of $ 480 in 2002 (derived on market exchange rate) fails to reflect the real

purchasing power of the people. In terms of purchasing power parity In terms of what income will buy) India had a per capital income 2,370. India continuous economic growth at about 4.0 per cent per year spread over about five and a-half decades is a unique phenomenon she world goes. For one thing, the annual 3.5 per cent growth recorded during the 1950s and 1960s went on to become 5 per cent during the next two decades or so beginning with 1974-75 and for the subsequent period is being projected at 7 per cent.

(2) Self-reliance and Minimal Dependence : India has sought to control and regulate the impact of the international environment on its domestic economic and political choices. It haš done so successfully enough to minimise the dependency constraints that afflict many UDCs. India’s development plans have been oriented towards one overriding and widely accepted national goal: maximising self-reliance.

The basic industries strategy, launched in the Second Plan, succceded in so får as India compared with other Third World (and many first and second world) economies became relatively self- sufficient with respect to the production of capital and intermediate goods and most consumer durables.

Import substitution and industrial diversification have, moreover, released India from heavy reliance on finished industrial imports-thereby freeing it from dependence on particular trading partners that characterised its trade at the time of independence in 1947 and still cháracterises the trade of many southern countries.

Unlike most UDCs, India invested in agricultural technology. Agricultural production since the mid 1970s has not only made India self-sufficient with regard to food but also relieved the country of the oppressive burden of food imports of the earlier Plans and has allowed greater manoeuverability in planning strategies.

Despite large absolute external borrowings, India’s debt service payments have remained low, well below those for comparable large UDCs, such as Mcxico and Brazil.

(3) Agricultural Transformation: As late as 1965 India was being considered as “a basket case which deserved to be dumped into the sea to save others in the boat from sinking”. But, within a decade India cam to be quoted in the US official documents (Report of the Presidential Commission on World Hunger, 1980) as “the only developing country n the world which has built a solid system of food security.” The Sea change that the Indian agricultural scene has undergone over the last three and a. half, decades is apparent even to.any casual observer.

Agriculture has transformed from subsistence to market-oriented, from traditional to technology-oriented, from extensive to intensive, r mono-crop to multi-crop and from open-cultivation to controlled cultivation and has ushered in a rainbow of revolutions green (crops white (milk and milk products), blue (fisheries and marine products),

yellow (oilseeds and oil), grey (eggs and poultry products), golden (horticulture) and brown (bio-mass). In bargain, India has emerged as a largest producer of milk (also the lowest cost producer. of milk), mangoes and bananas in world, second in vegetablcs, fruits and sugarcane, third in tobacco and fourth in wheat and oilseeds.

What is most creditable on human plane is the fačt thát food. scarcities and shortages no more spell misery and suffering as they did only half a century or so ago. Famine is already a spectre of the past. Prof. A.K. Sen lists out five factors that explain our ability to fight famines

(i) an alert information system regarding early signs of disaster;

(iii) use of cash in providing relief without relying exclusively on bureaucratic food movement;

(iv) use of employment as a condition for relief, providing a process of self-selection of recipient of benefits;

(v) the use of employment programme to make some contribution to the economic and social infrastructure.

(4) Industrial Change : India has emerged as a leading industrialised country; it has a fairly high manufacturing base (61.7 on a scale of 1-100). Indigenous capacity in a number of industries has been built up to the point that, except for certain industrial raw materials such as petroleum, sulphur, rock phosphates and certain non-ferrous metals where our natural endowment is limited, and certain sophisticated items of machinery, there are very few areas in which imports are necessary for sustaining the growth of the economy. On the contrary, engineering goods have become a larger component of our exports and the share of other non-traditional manufactured commodities is going up. One of the crucial sectors that is witnessing an unprecedented growth is the high technology sector, including mini and micro computers. This revolution in the industrial sector has been largely made possible by the adoption of sophisticated technology much of which has been indigenously conceived and developed. As in other advanced countries, in India robots are no longer confined to science fiction and films, automated factories are not mere twilight dreams.

(5) Changes in Foreign Trade : Unlike a typical underdeveloped economy, India’s foreign trade, presently, is highly diversified and has recorded changes of far-reaching importance (although India is a minnow in world trade).

India has begun to realise the. importance of its being small, unimportant ‘minnow’ in world trade.

International media have recommended India as one of the brighter emerging markets in the new millennium, one to which funds could be usefully relocated.

(6) Novelties of Indian Dual Economy : Although the pattern of economic development in India during the post-Independence period essentially resembles a dual economy model, there are some dissimilarities between a typical dual economy model of development and the Indian experience. Among these the following. may be noted:

(a) The shàre of agriculture in GDP in India has declined significantly and that of the manufacturing sector has gone up. However, corresponding to this structural shift in production, the structure of employment has shown little change.

(d) Unlike in many other dual economies particularly those in Latin America, the inflation rate in India during the post- Independence period has been very moderate – about 6 per cent per annum. One reason for this may be the relatively low level.of deficit financing; during the period as a whole deficit financing has accounted for less than 5, per cent of the aggregate public expenditure.

(7) Strong Fundamentals : Another important thing about the Indian developmental experience is the ability built up over the years to weather crisis. There are very few instances in the last five and a-half decades when an economic crisis hàs led to an about-turn in economic policy. There are two main areas of crisis, one caused by the vagaries of the weather which manifests itself as food crisis, and the other which manifests itself as a foreign exchange crisis. In both these areas, the crisis management has þeen efficient.

(8) Available Infrastructure: India possesses a viable infrastructure.
(a) Special mention need be made of towering transport system that exists here. The’ rapid development of the economy over the past five and a half decades has placed demands on the transportation system the magnitude of which is not generally appreciated. The Indian Railways system is one of the largest in the world. Indian shipping is among one of the top sixteen.

(b) India’s fast developing power system (consisting of hydro, thermal and nuclear) has been receiving attention lately. It is proposed to add 46,939 mw to existing capacity during the Tenth Plan period, as against 20,891 mw during the Ninth Plan and 16,010 mw during the Eight Plan.

(d) In the sphere of health and education also substantial progress has been recorded as can be viewed from the fact that the number of students, schools, colleges and universities has phenomenally shot up.

(e) According to the 2004 World Competitiveness Year book, India has become a ‘magnet of services’ by not only attracting outsourced administrative services, but. also by developing the competitiveness of its software, entertainment and financial services.

(9) Expansion of Science and Technology: The expansion of science and technology in’ India- including nuclear power, a high technology. area requiring great precision and knowledge- has received some comment lately.

India has over 1,300 research institutions doing specialised research on such diverse areas as atomic energy, ,space, Antarctica, defence, aeronautics, agriculture,forestry.electronics and health. The 1960s saw scientists successfully bring the land to lab by ushering in the Green Revolution leading to self. sufficiency in foodgrains. It was followed up with a White Revolution: abundant milk supply through Operation Flood.

(a) The post-independence period has also seen some far-reaching changes in the legality of the caste systém, and these have included making the practice of untouchability a criminal offence. India has been many years ahead of the West in introducing its own programmes of affirmative action and positive discrimination. The Constitution of India, which came into force in 1950, makes explicit provision for such action.

(b) By the standards of other countries that are at similar levels of per capita income, India has, on the whole, had better rule of law than other low income countries, and fürther in more recent years has made remarkable progress in removing bureaucratic barriers.

(c) There is an exponential rise in the flow of information about world developments, products and services. There is a multiplicity of choices and consumers are aware of their rights.

Conclusion : All the above, in short, help to characterise India as a ‘developing economy, different from an underdeveloped economy, that most of the other countries belonging to this per capita income group are. India scores high on ‘economic dynamism’ and future orientation
capped by its immense potential of human
resources-described as a giant with tremendous potential’. The Economist, in a recent survey, says India is a miracle waiting to happen, a tiger’ trapped in a cage of its own making. The World Bank eyed India ds one among the big five economies (along with China, Brazil, Indonesia and Russia) which will change the way business is done. Another study

on the subject rightly concludes: ….. “among developing nations, India has by far the best chance of succeeding (in its economic development). The doubt is not whether but when”