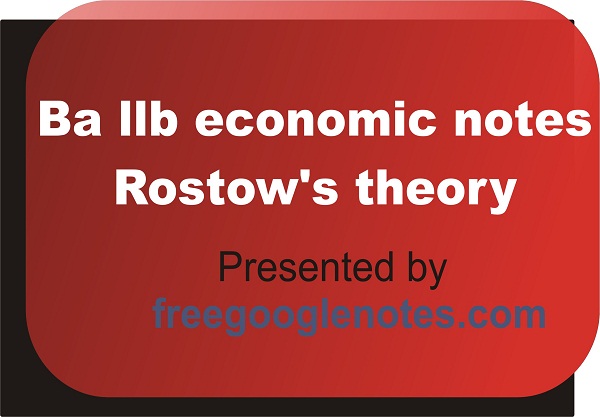 Q.6. Write notes on the following :
(a) Neo-classical theory of Economic Growth and underdeveloped countries.

(b) Critical appraisal of Rostow’s theory of the stages of Economic Growth.

Ans. (a) The neo-classical theory seems to favour underdeveloped countries, as it incorporates such causal variables as are important for the development of these countries. For example, the neo-classical take; account of such factors are population, a supply of labour, capital and; technological progress as explanations of growth. In respect of overpopulation or abundant supply of labour some individual economists? of the school have focussed on solutions too. For instance, Hamberg thinks of the solution in terms of an increase in saving and in the full capacity rate of growth so as to absorb the surplus labour force. Another neo-classical ećonomist, Mrs Joan Robinson, in her model of economic growth also discussed the problem of population and its effects on the rate of capital accumulation and growth of output. She makes the formulation in terms of two fundamental factors, Firstly, capital formation is determined by the way income is distributed. Secondly, the rate of utilisation of labour is a function of the supply of capital and labour. Any increase in population leads to an increase in the labour force. If it is unaccompanied by an increase in capital, then it would reduce labour productivity. And if real wages remain constant, it will reduce the margin of profit. This in turn widens the gap between capital and labour supply, also causing unemployment. Hence to attain the ‘golden age’, where there would be full employment of labour and full utilisation of capital, it is essential that the growth rate of the population is matched with the growth rate of capital.

According to Kaldor, underdeveloped countries are generally faced with the problem of population growth. Kaldor model explains that when the populatıon growth rate is equal to or exceeds the growth rate of the economy, the technological progress function is adversely affected and the economy lands into a situation of premature stagnation. Kaldor suggests two alternatives to come out of this dilemma. Firstly, raising technological improvement in economic growth and secondly, control of population before it reaches maximum.

Prof. Robert M. Solow, another neo-classical economist, considers the case of a dual economy, which is an important feature of an underdeveloped economy. The economy comprises two sectors-capital sector or industrial sector and the labour sector or agricultural sector. In the capital sector, the rate of accumulation of capital is more than the rate of absorption of labour. More employment opportunities can be created in this sector with variable technical coefficients. The agricultural sector is marked by the existence of disguised unemployment and the shortage of skilled labour. The real wages are very low and the productivity per worker is also low. Under such conditions, steady growth can be achieved and maintained only if the capital-labour ratio is substantially higher. This is an important lesson ‘which the underdeveloped countries can learn from the study of Solow’s model. Thus, this model is very much relevant to the conditions of underdeveloped countries.

The neoclassical theory of economic growth assumes certain conditions which are quite helpful to the economic growth of a country. These conditions are namely, adequate supply of trained labour and managerial skill, well-developed banking sysłem, adequate and efficient system of transport, free transfer of knowledge between different countries, and the keen desire to develop at the earliest. Some of them are capital accumulation, technological progress, which are also important factors. This is their valuable contribution towards understanding the process of economic growth which is quite helpful for countries desirous of rapid economic growth. The neoclassical economic growth theory in the forın represented by neo-classical economists like Solow, Meade, Mrs Joan Robinson, Kaldor is quite simple and attractive. They promise a state of steady economic growth. Again, the concept of the golden age lays stress on the parity between the growth rate of capital ànd the growth rate of the population. The parity between these two growth rates is very essential for the underdeveloped countries, striving for development with stability.

(b) Rostow’s theory of the stages of Economic Growth is the most widely circulated and highly commented piece of economic literature in recent years. His theory is based on the facts of history which give us a realistic and lucid analysis of economic growth. It has much to contribute to economic growth. Rostow’s work has created a lot of interest not only in academicians but also the policymakers. His theory of the stages of economic growth incorporates in a very significant way, perhaps for the first time institutional and social factors into the growth process. This is done with the help of the observable propensities which influence such prime movers of growth like the. quantity and quality of labour and capital.

Despite the above arguments in favour of the theory, Rostow’s historical approach to economic, growth is subject to severe criticism on the following grounds :

(1) Traditional Society Not Necessary for Development: According to critics, it is not true that every country essentially passes through the first stage of traditional society. There ‘are countries in thé world like the United States, Canada, New Zealand and Australia which were born free of traditional society and they attained the preconditions from the U.K.- an advanced country.

(2) Preconditions May Not Precede the Take-off: According to critics, the state of preconditions is also not essential to be undertaken before the také-off stage. For instance, there is no reason to believe that an agricultural revolution and accumulation of social overhead capital in transport must take place before the take-off.

(4) Lack of Basis: Rostow does not provide any basis for distinctly Separating one stage from the other. It is difficult to ascertain when a particular stage begins and the other ends.

(5) Not Applicable to All Countries According to Prof. Meis Rostow’s stages analysis may not be applicable to all countries. Some countries may, in fact, jump certain stages during their growth process.

(6) Uncertainty: Rostow’s stages analysis only tells the sequence of stages. It fails to predict the course of events with regard to economic growth. Also, what would happen after the 5th stage of growth is beyond the canvas of Rostow’s growth analysis.

(7) Criticisms of.the take-off: l is the take-off stage which has been bitterly criticised by a number of academicians. Some of the important criticisms follow as under:

(ii) Rostow’s dates of the take-off are arbitrary: But this assertion of his has no sound basis as Cairncross in respect of Great Britain remarks: “I know of no evidence that growth was more self-sustaining in 1802 than it had been in 1782”.

(iii) Take-off could be abortive: Further, Rostow believes that there would be regular economic growth after, the take-off. But there have been. instances of abortive take-offs’. For example, Russia faced an abortive take-out between 1890 and 1914.

(iv) Rostow’s, Conditions for Tuke-off are Arbitrary: The critics charge Rostow’s analysis that his theory lies in the looseness and arbitrariness with which the conditions and characteristics of take-off are specified. According to Rostow, the first condition of take-off’ is that there must be a rise in the proportion of productivity. investment to national income to over 1O per cent. But there cannot be any universal fixity about this tentative figure. Similarly, his other condition of taking- off that the development of one or more, substantial manufacturing sectors with a high rate of growth seems to be a fuzzy statement because of the imprecision inherent in the adjectives ‘substantial’ and ‘high’.

(8) The Stage of Drive to Maturity is Puzzling and Misleading: This stage of a drive to maturity covers all the features of the take-off stage like the rate of new investment over 10 per cent. of national income, development of .new production institutions. It automatically lowers the importance and the existence of another stage of a drive to maturity. Thus, his concept of “Drive to Maturity seems to be puzzling and misleading.

(c) Rosenstein Rodan Theory is an improvement over the traditional static equilibrium theory. The big push theory clearly brings into focus the need for a massive effort on the part of the underdeveloped countries to industrialise themself provided they are really serious about economic development. It wårns that piecemeal efforts of development would be of no avail. It is the high minimum quantum of investment that takes an underdeveloped ecónomy towards an optimum position.

Despite the above, the big push theory has been criticised on several grounds by a number of leading economists like H. Myint, Jacob Viner and H.S. Elis etc. It has been argued that this theory creates more problems than it solves. The main pillars of criticism are as follows:

(1) Inadequacy of Resources: The theory fails to recognise the fact that the number of resources in an underdeveloped country is limited. They lack requisite capital, skilled labour, entrepreneurship ability and social and economic overheads. So these countries cannot adopt the big push theory.

(2) Neglect of Agricultural Sector: Rosenstein Rodan believes that an underdeveloped country can undertake its development through an evil investment in all types of industries–capital goods, consumer goods and social overhead capital. In this way, the big push theory totally ignores agriculture which is the prime source of living in underdeveloped countries because this sector contributes a major part of national income and provides livelihood to a large section of the working population. The neglect of the agriculture sector in such economics will retard rather than accelerate their economic development

(3) Low investment leads to a Large Increase in Output: In. this analysis of economic development of underdeveloped countries. Adler reveals, “A relatively low level of investment pays off well in thé form of additional output.” He has concluded this fact on the basis of observation regarding the development process in India, Pakistan and many other Asian and Latin American countries. It, thus, proves the “big push” theory unrealistic and unpracticable in underdeveloped economies.

(4) Too much Emphasis on Indivisibilities: The big push theory lays too. much stress on the problem of indivisibilities of both the demand and supply sides.

(5) Neglect of the Importance of Techniques: Celso Furtado points out that the big push theory neglects the importance of techniques in its Overenthusiasm for capital formation. The fact is that although capital Formation has been the main vehicle of the assimilation of new techniques it is, in itself, responsible for only a relatively small fraction of the increase in the productivity of labour. In the historical context of today, development depends increasingly upon technique and less on direct capital-formation in the productive processes.

(6) Generate Inflationary Pressure: The heavy investment in social overhead capital is not only highly expensive but also has a high capital-output ratio and a very long gestation period. It also generates inflationary pressure in the economy for the want of consumer goods. Consequently, this large inflationary pressure, in turn, would prolong the process of constructing overhead capital, and it would, thus, be very difficult for an underdeveloped country to achieve the goal of rapid economic growth.

(8) Lack of External Economies: According to the “big push” theory, the external economies can be realised in underdeveloped Countries only through investments in śocial overhead capital. But as pointed out by Viner, “Underdeveloped economies realise greater economies from world trade independently of home investments”. Later, Rodan has also released this fact.