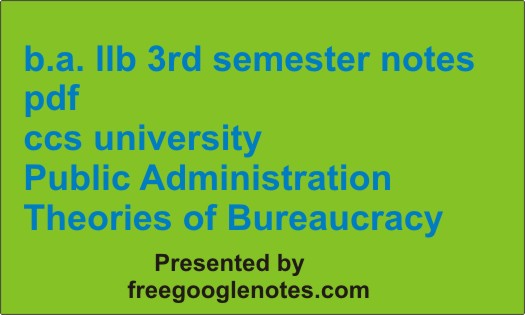 Ans. Since the rise of bureaucracy in the modern state system, its growing stranglehold overpowers, and its increasing control over the lives of the citizens, a number of thinkers and social scientists have viewed it from different angles. It, therefore, will be useful to briefly examine what representatives of different streams of thought have said on this subject.
Marxist View of Bureaucracy
Much before Karl Marx, Saint Simon had viewed bureaucracy as officials who governed in their own interests rather than in the interests of the governed. They sought high to pay for themselves and were not merely useless but were an immense, growing, and expansive crowd of incompetent parasites. “Since they had the same needs and desires, as producers, but produced nothing themselves, these people necessarily live on the work of others, either they are given or they take; in a word, they are idlers, that is to say, thieves.”
Karl Marx used the word bureaucracy in the pejorative sense. All Marxists regard bureaucracy as tied to the capitalist state and are, therefore a bourgeois phenomenon. Unlike Hegel, Marx did not believe that the state represents the general interest of society. Likewise, bureaucracy is not a universal estate, it is a particular closed society within the state serving its own, not the general interest. It is a social force through which the interests of capitalism and the bourgeois are implemented. The issue of the emergence of bureaucracy and of its continued existence is, therefore, inextricably connected with the wider topic of the character of the capitalist state. Bureaucracy has the task of concealing the actual power relationships, and functioning as “the general interest smoke screen between exploiters and exploited”.
Marx also believed that bureaucracy contributes to the alienation of the people. It becomes an autonomous and oppressive force that is felt by the majority of the people as a mysterious and distant entity-as something which although regulating their lives, is beyond their control and comprehension, a sort of divinity in the face of which one feels helpless and bewildered.”
Marx maintained that the state and its executive constitute an instrument through which the ruling class expresses its power, bureaucracy fulfills the functions of contributing to the consolidation of class differences, and of supporting the power of the ruling class. Marx insisted that bureaucracy grew as a result of external and pathological social divisions. However independent it might appear, bureaucracy depends on existing divisions within society in two ways :

(1) it depends directly on the separation between civil society and the state, without which it would have no raison d’etre, it rests on the existence of divisions within civil society, of corporations, each concerned with its particular interests. In Marx’s corporations, each is concerned with its particular interests. In Marx’s view, bureaucracy was not a class by itself in class societies. It is the servant of the classes; “not basic, but ultimately subordinate to the ruling class. In a capitalist society, that class to the bourgeois.”

Bureaucracy shrouds all of its actions in secrecy which is preserved internally by hierarchy, and externally i.e. against the community, by its nature when it interacts with the world, the relationship is essentially manipulative.
The only thing for which Marx praised bureaucracy was its role in centralizing nations.
He was not in favor of taking over control of the bureaucracy, as earlier revolutions had done, by the proletariat but he favored that the proletariat must smash the institution.
Marx had not said with clarity as to what would be the position and role of bureaucracy in the post-revolution period. With the advent of the communist society, true democracy can develop. In the communist society, social and economic inequality will be eliminated. That will end exploitation and the social classes. It is in the post-revolutionary society that the state that represents the interests of the ruling class would wither away. With the end of the state as a policeman comes a reduction in the number of functions and a complete change in the nature of functions carried out by the public power. “There will be no need for masses of haughty, brutal, repressive bureaucrats.”
Lenin
Lenin agreed with Marx that bureaucracy is a parasite and is connected with bourgeois society. He said that two institutions are most characteristics of the state machine-bureaucracy and standing army. “The bureaucracy and standing army are a parasite on the body of bourgeois society-a parasite created by the inherent antagonisms which rend that society, but a parasite which ‘chokes all its pores of life.”

Bureaucracy is perceived by him as organically tied to the capitalist state. It cannot be treated as an independent unit of analysis. A revolt by the bureaucracy which strikes at the root and basis of the ruling class is not possible. He wrote that bureaucrats “are the most faithful servants of the bourgeoisie, connected to the latter by ‘thousands of threads”. Bureaucrats could not be neutral, let alone amiable to the proletariat; as a result of their social position, connections and conditioning they would necessarily take the side of the bourgeoisie. They would simply be unfit to carry out the orders of the proletarian state. He objected to bureaucracy because bureaucrats are privileged groups holding jobs remunerated on a high bourgeois scale, and also because police and bureaucracy are unanswerable to the people and placed above the people.”

What will happen to bureaucracy after the revolution? Lenin’s basic thesis was that the workers, after winning political power will smash the old bureaucratic apparatus. They will shatter it to its very foundations and raze it to the ground.
But he was conscious of the fact that some administrative apparatus would still be needed to manage the socialist society. He was of the view that the workers will Replace the old apparatus with a new one.
Measures will be taken to prevent the new workers from turning into bureaucrats. These measures were suggested by Marx and Engels:
(1) not only election but also recall at any time;
(2) pay not to exceed that of a workman;
(3) immediate introduction of control and supervision by all; “so that all may become bureaucrats for a time and that therefore nobody may be able to become a bureaucrat.” Lenin repeatedly said that workers and peasants will administer better than bureaucrats. The functions of the old state power have become so simplified that these can be reduced to very simple operations of registration, filing and
checking that they can be easily performed by ordinary workers for “ordinary workman’s wages … These functions can (and must) be stripped of every shadow of the privilege of every semblance of official grandeur.”
Unlike Marx, Lenin had to cope with the practical problems of socialist reconstruction in Russia as leader of the communist government after 1917. Although he claimed that “we have done what no other state has done in the fight against bureaucracy. We have destroyed it to its very foundations.” Yet he was aware that the task was very difficult.
The new regime could not function without this apparatus, as he once said “every branch of government creates a demand for such an apparatus”. He recognized the need of engineers and other specialists in the Soviet society and said “they do know to run shops …..no one else did; there were no other bricks with which to build.” Even he fought for better treatment and higher wages for bourgeois specialists, higher than those of workers and even of party leaders.

Obviously, there seems to be a contradiction in Lenin’s formulations on bureaucracy as a Marxist theoretician and his views as a leader of the Soviet Government engaged in the task of administering the state. He overcomes that by saying that the earlier functions of bureaucracy i.e., being an instrument of the bourgeois class, had ceased but that the effects of the bureaucratic system survived.

Lenin knew that the increasing number of public officials in Soviet Russia was growing into a large bureaucracy and that revolution had not eliminated it. He explained the difficulty when he said that the bureaucracy could be defeated only if the whole people could be mobilized to participate in the administration of the state… “Bureaucracy has been defeated. The exploiters have been eliminated.
But the cultural level (of people) has not been raised, and therefore the bureaucrats are occupying their old positions. They can be forced out only if the proletariat and the peasantry are organized far more widely than has hitherto been the case.”