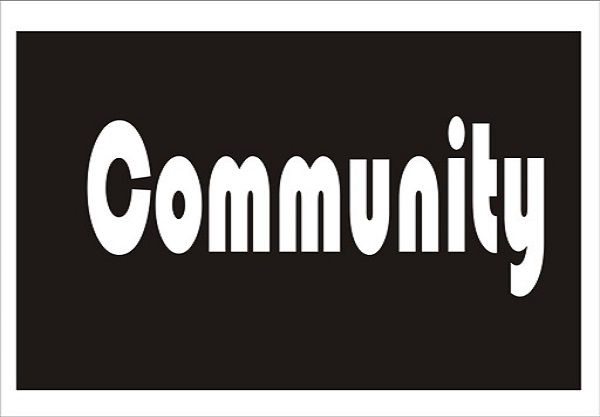 1. Ginsberg. “By community is to be understood a group of social beings living a common life, including all the infinite variety and complexity of relations which result from that common life or constitute it.”

2. MacIver. “Whenever the members of any group, small or vast, live together in such a way that they share, not this or that particular interest but the basic conditions of common life, we call that group a community.”

3. G.D.H. Cole. “By a community, I mean a complex of social life, a complex including a number of human beings, living together under conditions of social relationships, bound together by a common, however constantly changing stock of conventions, customs and traditions and conscious to some extent of common social objects and interests.” Essential elements of community

Defining community Bogardus has written, “A community is a social group with some degree of ‘we feeling and living in a given area.” According to Davis, “The community is the smallest territorial group that can embrace all aspects of social life.” In this way, there are the following essential elements in a community :

1. Definite locality. The first condition of the community is a definite locality since without it the relation between human beings cannot be established and the ‘we feeling’ cannot evolve. In the words of Sample, “Man is a product of the earth’s surface.”

3. Community sentiment. According to Sutherland, Woodward, and Maxwell, “A community is a local area over which people are using the same language, conforming the same mores, feeling more or less the same sentiments, and acting upon the same attitudes.” In this way, this community sentiment is extremely essential in the people belonging to a community.

4 . Likeness. According to Green. “A community  is a cluster of

people, living within a narrow territorial radius, who share a common way of life.” In this way the community exhibits similarity and concurrence in language, customs, mores, traditions, etc., besides many

5. Permanency. A community is not the territory and is temporary like a crowd. For, it is essentially a permanent life in a definite place.

6. Natural. Communities are not made or created by an act of will but are natural. An individual is born in a community. It is by virtue of community that he develops.,

In addition to the above essential elements of a community, a common life and some degree of self-dependence are also necessary

According to Osborn and Neumeyer, a community is “a group of people living in a continuous geographic area, having a center of interest and activities, and functioning together in the chief concerns of life.”

Essential elements of the association.

An association has the following essential elements :

3. Cooperative spirit. According to Bogardus, “Association is usually a working together of people to achieve some purpose.” In this way, an association originates in a spirit of cooperation.

4. Organisation. Defining association, Ginsberg writes that associations are constituted of those groups of individuals who are organized in order to complete some specific work or works, examples of which are trade unions, political parties, or associations of scholars. Put that way, it is evident that organization is an essential element of an association.

5. Laws. The organization of association rests upon a particular

set of laws. Some laws, be they written or merely verbal, are essential for an associations

Q. 2. Examine the nature of community sentiment and show its significance in the modern world. Distinguish between Society and Community.

Ans. What is Community Sentiment

Community is one such human group living in a definite locality that is characterized by one common life. Community sentiment is the feeling of unity among its members consequent upon this common life. In the absence of this sentiment, no human group can claim the title of community, whatever the length of time for which it may have resided in one place. Community sentiment arises naturally among people who spend a common life, live together, speak a common language, accept the same customs and traditions or share a common goal and interest. No individual can live unaffected by this feeling although its intensity may not be the same in different communities and in different members of the same community. This serves to bind the members of the community with a single thread. Consider the example of a rural community. All the villagers lend each other a hand in the event of need in agriculture and in other occupations. They take part in all important occasions which occur in a neighbor’s home. They are present when marriages, deaths, births take place in any family. They celebrate the festival altogether and jointly face all calamities which descend upon the village. In this way, a sense of brotherhood is generated among the villagers and they tend to identify another’s delight and discuss with their own. This same complex of emotion is called community sentiment. Due to the community sentiment, people sacrifice their own little interests in the interests of the community and begin to look upon the good of the community as their own good. Constituents of community sentiment

1. We feeling. The most important element in community sentiment is the ‘We Feeling.’ As a result of it an individual instead of regarding himself as separate from others, believes himself to be identified with them. All the people look upon the pain or pleasure of any member of the community as their own pain or pleasure. This kind of ‘we feeling can be seen among people of one sector of one village Gand among those on foreign strands who hail from the same town or

country. The fundamental cause of this feeling is a similarity of interests of people who live in the same place…

3. Sense of dependence. The third element of community sentiment is the sense of dependence, which means that an individual believes himself to be dependent upon community and denies his existence apart from community. Due to this feeling of dependence, he does not object to any designs that society has upon him and always tries to work in its favor.

According to Maclver, “Community sentiment is developed by the socialization process itself, by education in the largest sense, working through prescription and authority social esteem or disfavor until habits and conformities become the ground of loyalties and convictions.” In this way the community sentiment changes in concurrence with the changes in the structure of society.

1. Extension of community in modern times. In ancient times the communities were very small. Due to a smaller number of means of travel, coupled with the absence of the means of communication, the contact of people was limited to a mere hundred and was confined to a definite area. Osten people did not even proceed out of the precincts of their own villages. Slowly, with the development in science, the means for transportation and communication were developed. With these facilities, people started established business and friendly relations not only with their own countrymen but even with people living thousands of miles away in foreign countries. In this way, the circle of community sentiment started widening.

Actually, due to the effect of the industrial revolution, the present world is passing through a transition period. Thus there cannot be any indications of definite progress in one direction. While ideas of universal brotherhood and internationalism are increasing, on the one hand, it is possible to see, one the other, the presence of interests based upon color distinctions and narrow communal interests. It is definite that the sense of universal brotherhood shall triumph in this struggle because the discovery of atomic or nuclear power has made a universal organization of human beings indispensable since otherwise their very existence is threatened. A majority of the modern thinkers savor nationalism which can nurture the sense of universal brotherhood and in which other narrow interests have been sacrificed for the community sentiment of humanity.