Skip to content
Home » Mass Media course » Study of Media:What is mass media? What are the various type of mass media? 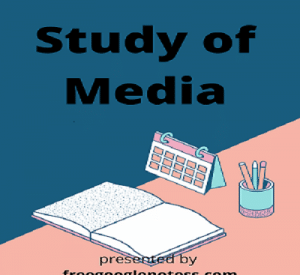 Study of Media:What is mass media? What are the various type of mass media?

Ans. Introduction of mass media:-
Mass Media make a major contribution to the flow of information unavoidable part of everyday life.
Media refers to any kind of format used to convey information. Mass media refers to those types of media that are designed to reach large numbers of people. Media includes every broadcasting and narrowcasting media such as newspapers, magazines, TV, radio, films, photography, billboards, direct mail, telephone, fax, internet, etc.
Various types of mass media are as under:-
(1) Print media – Print media is a rather commonly used term referring to the medium that disseminates printed matter. In everyday life, we refer to print media as the industry associated with printing and mostly with the distribution of news through a network of media, such as newspapers and journals. People also refer to print media simply with the term ‘press’. It’s an intermediate communicative channel aiming at reaching a large number of people. Print media includes all
printed forms of the press: newspapers, newsletters, booklets, magazines, and pamphlets as well as books and other printed literature.
(2) Electronic or Visual Media – Visual communication is just one of the ways people interact, but it is one of the most important methods of communication. While written and verbal communication are both valuable, sometimes it may be difficult to explain without a visual aid. Examples of visual media include pictures, puppets, dramas, street plays, videos, broadcast media, and teleconferences.

Ans. Social Media – Social media has certain important functions to perform which include affecting public opinion and seeking to improve the political fabric of our democracy, providing a link between the out and the people acting as a sout, watchdog, and effective socialization. Various functions and purposes of media may be briefed as an understanding of public opinion. Media makes democracy function. Political Agenda. The link between sout and the people Govt. watchdog socialization.

Q. 3. What are the functions of media?

Ans. Functions of Mass Media – Mass media has certain important functions to perform which include affecting public opinion and government, improving the political fabric of our democracy, providing a link between the government and the people, acting as a government watchdog, and affecting socialization. Various functions and purposes of media may be briefed as follows-
(1) Shaping of public opinion – Newspaper and television help in the shaping of public opinion.
Though we elect our representatives, it is the media that keeps an eye on the working of them and their policies for human welfare. The divergent views and in-depth analyses presented by the mass media are of vital importance in the formation of public opinion. The books, journals, magazines, newspapers come within the ambit of print media. As it enjoys a large leadership, the impact it creates on people’s minds has wide ramifications on the thoughts, views, and actions of the public as well as the authorities.
(2) Media makes democracy function – For the developments in society, the media plays an important role.
SOUMYA DUTTA writes “Informing the citizens about the developments in the society and helping them to make informed choices, media makes democracy function in its true spirit. It also keeps the elected representatives accountable to those who elected them by highlighting whether they have fulfilled their wishes for which they were elected and whether they have stuck to their oaths of office.”
(3) Political Agenda – Political agenda has a vast scope, including all those matter that need to be considered by the government.
The press is regarded as the ‘market place’ of political thought in a democracy, for the policies and aims of government are made known through the channels of the press. They are then examined exhaustively by the opposition, commentators, editors and the public in general. Television and radio
further publicize this interplay of opinion through news reports appearing in newspapers, interviews and panel discus-
sions. Thus, mass media affects our opinion on varied issues like civil rights, economy, and social welfare. Diligent editors
and commentators work on the principle that all the facts in a political situation must be presented to the public. Only after
considering these facts can the people make their decisions.
(4) Link between the government and the people The mass media is the vehicle through which the government informs, explains, and tries to win support for its programs and policies.
(5) Government watchdog-An important function of the mass media is to bring to the attention of the people, the
evidence of corruption, abuse of power, and ineffective policies and programs. Mass media’s surveillance function about
critical issues concerning the political, economic, social, and cultural sectors of the society provides people with informa-
tion that would have otherwise been left unknown to them without the mass media.
Investigative reporting, which in come cases has led to the ouster of presidents and the fall of corrupt government,
has made the media an effective and credible watchdog and boosted its credibility among the public. Investigative reporting has also helped accurtom officials to an inquisitive press a
helped build a culture of openness.
(6) Socialization – The mass media, most significantly through its news, reporting, and analysis, affects what and how we learn about politics and our political views. Along with family, schools, and religious organizations, television has also become part of the process by which people learn society’s
value and come to understand what society expects from them. In this regard, the impact comes primarily from entertainment programming. Television ‘s portrayal of minorities and women, family relations, and the place of religion in life, is considered to be a powerful influence on our attitudes.