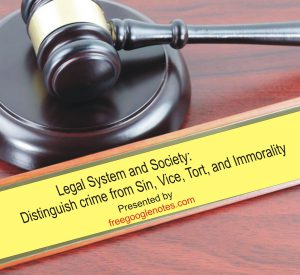 How is crime distinguished from sin and morality?

What is the difference between vice and crime?

What are vice crimes?

1. Crime and Sin. For the sake of scientific study, sin, vice, tort, immorality, etc. have been dealt with differently in criminology. A crime is an act against society or law or both for which it is penalized. Keeping this definition of crime in view, it will be beneficial to differentiate all these concepts from crime.

All the acts against religion are considered sins. Thus, sin can be defined as the transgression of divine laws. The concept of sin is traditional, based on orthodoxy and rigidity. The final decision in sin is taken on the basis of religious books while in the matter of crime, it is taken by the law court. Darrow has defined sin in the most suitable manner. In his words, “Sin is an offense against God, a transgression against the divine law and any thought, desire, word, act or omission against that law.”

2. Crime and Vice. Vices are, often, included in the category, but many of them, sometimes, are not regarded as crimes. There is a lot of difference in their aims. The criminal causes harm to others while the vicious or the wicked causes harm to himself only. For example, vice-like gambling, drinking, prostitution, or deriving pleasure out of illicit sexual intercourse, cause harm to the individual only. As the harm to the individual indirectly affects the society, the latter therefore prohibits the vices and generally gives punishment for them.

3. Crime and tort. The encroachment of individual rights is known as tort. Underhill has included the following actions in tort.

1. Encroachment of fundamental rights for which one is really authorized.

2. Encroachment of rights for which one is to suffer from personal loss.

3. The encroachment of the social rights of an individual. The losses which can be compensated are counted as a tort. The torts can be compensated, But in a crime, a due punishment is given compulsorily by the law itself. In tort, the man who has been injured or damaged by the vicious act applies to the court for compensation while in a matter of crime, the state itself punishes the criminal. The expression, interpretation, or any sort of article which defames a person for nothing, or trespassing by force are clear examples of torts.

4. Crime and Immorality. All the actions against morality, social patterns or values, or those which are generally thought improper, are put into the category of immorality. It is not necessary that all immoral acts are crimes. For example, telling a lie is not always a crime but it is in fact an immoral act. Immorality is decided by the intention, not by its result, while a crime is declared by its effect. The study of tort is conducted by the law. Interpretation of sin is the subject matter of religion. Therefore, here, only the vices shall be discussed. In the study of vices, from the sociological point of view, the study of sex vices is the most important one, as in social disorganization, it plays a very important role.

Contract Law-Breach of Contract and Remedies notes for Law Students