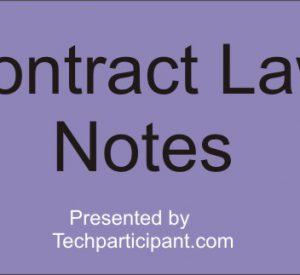 Contract Law Pdf:Principles on breaches of contract and Remedies

Ba llb notes on contract -I

Q. 4. State briefly the principles on which damages are

awarded on the breach of a contract.

Examine critically the rule in Hadley v. Baxendale, and

indicate to what extent the said rule is applicable in India.

“The damages which the other party ought to receive in

respect of breach of a contract should be such as may

fairly and reasonably be considered either arising naturally

from such breach of contract itself or such as may

reasonably be supposed to have been in the contemplation

of both the parties at the time they made the contract, as

the probable result of the breach of it.” Comment.