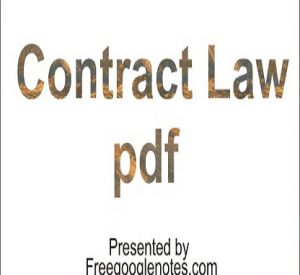 Q. 5. Elaborate on the following with regard to Breach of
Contract :
(a) Measure of Damages
(b) Liquidated Damages and Penality.
Ans.
(a) Measure of Damages
After the extent of loss which the plaintiff can recover has been
determined, it will be necessary to evaluate it in terms of money. In this
connection, following two principles deserve special consideration :
(1) Compensatory Nature of Damages : As aptly remarked by
ANSON, “Damages for breach of contract are given by way of
compensation for loss suffered, and not by way of punishment for wrong
inflicted. The measure of damage is therefore not affected by the motive
or manner of the breach.” In fact, “The object of awarding damages for
breach of contract is to put the injured party into the position in which
he would have been had the contract been performed.”
“The normal rule for computing damages for non-supply of the
goods would be the difference between contract price and the market
price of such goods at the time when the contract is broken. If there is
no available market, at the place of delivery, the market price at the
nearest place or the price prevailing in the controlling market may be
taken into consideration. This was held by the Division Bench of Delhi
High Court in M/s. Saraya Distillary, Sardar Baggar v. Union of India,
Further, “what the buyer is deprived of in the usual course delivery of
things by non-delivery is the value of the goods at the time and place of
the delivery, less price payable to him under the contract. The loss of
value is the natural result of the breach, the only kind of damage that
ensures in the usual course of things. The quantum of damages on account
of the breach of such contract would be the difference between the
contract price and the market price of the goods in question at the time
when the contract is broken. The provisions contained in section 37 do
not envisage that the buyer must resort to actual purchase and suffer,
loss before claiming damages.”
In Devender Singh v. State of U.P., The Allahabad High Court
“The measure of damages in contract is compensation for the
consequences which flows as a natural and capable consequence of the
breach or, in other words, which could be foreseen”.
It may be noted here that damages for anguish and vexation caused
by breach of contract cannot be awarded in an ordinary commercial
contract.

default of payment of any installment, the whole shall become due. This
is a stipulation by way of penalty,
Explaining the provisions contained in Section 74 the Supreme
The court further observed :
Section 74 of the Indian Contract Act deals with the measure of
damages in two classes of cases: (i) where the contract names sum to
be paid in case of breach and (ii) where the contract contains any other
stipulation by way of penalty… The measure of damages in the case of
breach of a stipulation by way of penalty is by Section 74: reasonable
compensation not exceeding the penalty stipulated for. In assessing
damages the Court has subject to the limit of the penalty stipulated,
jurisdiction to award such compensation as it deems reasonable having
regard to all the circumstances of the case.”
Explaining the expression “the contract contains any other
stipulation by way of penalty” the Supreme Court remarked :
“In our judgment, the expression…..comprehensively applied to
every covenant involving a penalty whether it is for payment on breach
of the contract of money or delivery of property in future, or for forfeiture
of right to money or other property already delivered. Duty not to enforce
the penalty clause but only to award reasonable compensation is
statutorily imposed upon the courts by Section 74. In all cases, therefore,
where there is a stipulation in the nature of a penalty for forfeiture of an
the amount deposited pursuant to the terms of contract which expressly
provides for forfeiture, the Court has jurisdiction to award such sum only
as it considers reasonable, but not exceeding the amount specified in the
contract as liable to forfeiture.”
Regarding the scope of Section 74, the Supreme Court finally
observed: “…..the application of the enactment is not restricted to cases,
where the aggrieved party claims relief as a plaintiff. The section does
not confer a special benefit upon any party, it merely declares the law
that notwithstanding any term in the contract predetermining damages
or providing for forfeiture of any property by way of penalty, the Court
will award to the party aggrieved only reasonable compensation not
exceeding the amount named or penalty stipulated.”
In Jhurai Lai v. Mohin Das Bose, while construing a compromise
decree to find out whether the default clause was penal or not, the
Allahabad High Court observed the following:
“Coming to the point as to what is a penal clause, certain facts
have to be borne in mind. The first fact which should weigh in deciding
the question would be as to whether the decree-holder was claiming
something more than what he claimed in a suit, or he claimed in the
execution by way of penalty only that much of the just claim to which

he was entitled to. The second consideration should as to whether the
just part of the claim was conceded by the defendant-debtor in complying
with the terms of the compromise within a certain period. And third
the condition should be as to whether the judge failed to comply with
the terms of the compromise without any just and proper cause so as to
disentitle him to the concession allowed to him by the decree-holder
under the compromise. The Court further added, “In a case where only
a part of the prima facie just claim is given up or conceded in consideration
of a certain condition and on failure to comply with that conditions, the
default clause comes into operation, it cannot be said that it is penal
because nothing is demanded from judgment-debtor by way of penalty.”
Stipulation by way of penalty or forfeiture clause in bail-bond,
recognizance or other instruments under the order of State or Central
Government: As pointed out earlier, an exception to Section 74 provides
that when any person enters into bail-bond, recognizance, or other
instrument of the same nature, or under the provisions of any law, or
under the orders of the Central Government or of any State Government,
gives any bond for the performance of any public duty or act in which
the public are interested, he shall be liable, upon breach of the condition
of any such instrument, to pay the whole sum mentioned.
In order to attract this exception following essentials must be
present”:
(1) A bail bond, recognizance, or other instrument is entered into
with the Government.
(2) The contract is entered into under the provisions of any law
or under the orders of the Central or State Government.
(3) The instrument is for the performance of any public duty or
act in which the public is interested.
(4) In case of breach of contract, the whole sum named or
mentioned in the instrument shall be payable.
Thus where the plaintiff has committed a breach of the contract
and one of the clauses of the contract gives discretion to the Government
to forfeit the security deposit, such forfeiture operating as a penalty, the
a court cannot in view of the exception to Section 74 of the Contract Act,
1872, directly relieve the party concerned of the hardship on that score.
It may also be noted that recourse to Section 74 can be taken only
in the event of a breach of contract. Recourse to Section 74 cannot be
taken if there is no concluded contract.