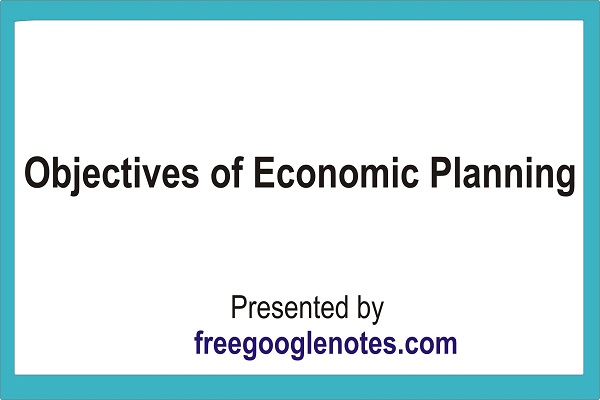 Q. 1. Discuss the major objectives and shortcomings of Economic Planning in India.

The major objectives of economic planning in India are as follows :
(1) Securing an Increase in National Income. This is the so-called growth objective that has been quantified in different plans from being as low as 2.2 percent per annum during the FYP-1 to as high as 8.0 percent per annum during the FYP-10. This: the objective is also expressed in terms of the level of incomes per capita, thus relating it to. an implicit or explicit objective as to the desired rate of growth. of population over

a period of time, as ‘well, as to such general concepts as the standard of living of the populace. The national income target is set both in terms of desirable rates of growth and of a target period by which the objective is to be attained. The objective is usually embodied in the concept of self-sustaining growth.

(2) Pushing up the Rate of Investment. This has been regarded as necessary for rather two distinct reasons. One is deemed to be necessary to bring about the planned increase in output. The other is that it is designed to bring the capital stock of the economy up to the level at the end of the plan period that ensures the growth of future output capacity. A failure to achieve this objective would, therefore, have both short-term and long-term repercussions.

(3) Ensuring Social Justice and Equity. There is the recognition that the present degree of inequality of incomes is unacceptable and should be reduced. This is to be brought about not so much by a redistribution of existing incomes as by channeling increasingly to the low-income groups the incremental benefits of growth.

(4) Providing Additional Employment. The employment objective as can be seen from various plan documents, has two components : (i) provision of employment to all job-seekers, i.e., full employment (also identified as the immediate aim); and (ii) gradual transfer of people from low productive (income) jobs to higher productivity. (income) jobs- the long-run aim. Each of the plans has given priority to providing a given and a sufficient number of jobs within a particular plan period, so as to make it possible to absorb a proportion of the backlog of unemployment and increase in the labor force in that period.

(5) Adopting Measures to Alleviate the Three ‘Bottlenecks’ regarded by the Planners as .being of Critical Importance, viz. Agricultural Production, the Manufacturing Capacity for Producers Goods, and the Balance of Payments : Removal of these bottlenecks seems crucial for achieving stability- both internal and external in the economy.

(6) Objective of Removal of Poverty. To the above five objectives was added. in the Draft FYP-5 the sixth one: to remove poverty. In the
early 1960s, it was realized that the benefits of development would not automatically reach the poor. By the end of the 1970s, the extent and urgency of the problem were amply driven home by the studies that threw up quantitative. measures of poverty. It was against this background that the removal of poverty came to be included as an objective of development in the Draft FYP-5. The subsequent plans only reiterated this objective.

(7) Objective of Modernisation of the Economy. The FYP-6, for the first time, explicitky mentioned the objective of modernisation. Modernisation implies a shift in the sectoral composition of production, diversification of activities, an advancement of technology and and

The objectives of economic planning in India, as listed above, are quite comprehensive in scope. However, these suffer from three major shortcomings:

(1) AbSence of Statistical Indicators. Each economic goal can have its own statistical indicators. But in our plans, very few of the objectives are quantified or have a time horizon attached to them, with the exception of national income targets and in more recent plans the employment and international payments objectives.

(2) Feasibility Ignored. There is no discussion of the feasibility or consistency of the set of objectives that have been chosen. This would apparently be not possible in the absence of a clear quantification of the objectives.

(a) Rapid Economic Growth and Employment: The process of economic growth can be accelerated by the use of capital-intensive high technology of production. But this type of technology is generally labor-displacing. Thus, a choice made in favor of this type of technology could only be at the cost of employment generation in the economy. Likewise, labor-intensive techniques of production, generally, create large employment opportunities. But such techniques are relatively less efficient; more employment may be created only at the cost of a possible higher rate of growth.

(b) Economic Growth and Equality: If the objective of equity is pursued seriously by attempting redistribution of wealth and income, it may have adverse effects on the rate of economic growth. The propensity to save of the richer sections of the society is generally higher, whereas the poorer sections have a relatively higher propensity to consume. A redistribution of income and wealth in favor of the poor would only mean that the available resources are being diverted from saving to current consumption.

(c) Economic Growth and Balanced Regional Development. Balanced regional development would require diversion of resources from relatively developed regions to backward regions: In the former regions, generally, the developed infrastructure is available which adds to the efficiency of the resources. On the other hand, the same amount of investment in backward regions with hardly any infrastructural facilities would result in relatively lower growth; thus, the balanced regional growth can be had only at the cost of efficient utilization of resources.

(d) Economic Growth and Price Stability: A gradually rising price level generally results in rising profits that stimulate private investment. On the other hand, the stationary price level will have adverse effects on the rate of profit, investment, and growth in the economy. For example, the historical rate of. growth in the Indian economy during the early phase of the planning was 3.5 percent per annum with an annual average rate of inflation of 5 to 6 percent. It had been anticipated at that stage that the growth rate could accelerate up to 5 percent if the inflation rate could be allowed to go to 8 to 9 percent. This is exactly what happened in the 1980s. Currently, when the inflation rate has been falling, it has been estimated that a 1 percent reduction in inflation leads to a decline in output by 2 percent below its potential.