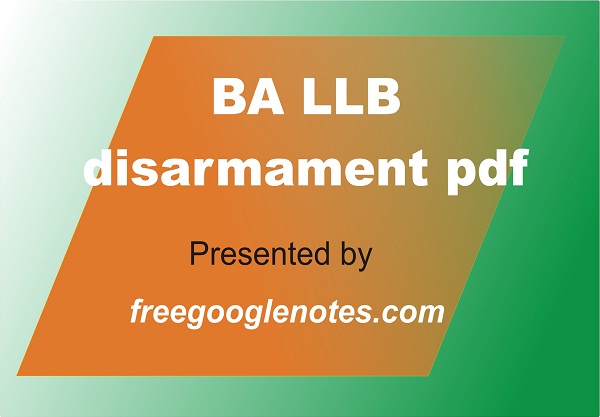 In the below post you will read disarmament pdf

This treaty was signed at Moscow, the capital of Soviet Russia, on August 5, 1963, but it came into force on October 10, 1963. So far a hundred countries of the world have signed this treaty. The government of the United States of America, the United Kingdom of Great Britain and Northern Ireland, and the Union of Soviet Socialist Republic were “Original parties”. They proclaimed as their principal aim the speediest possible achievement of an agreement on general and complete disarmament under strict international control in accordance with the objectives of the United Nations which would put an end to the armament race, eliminate the incentive to the production and testing of all kinds of weapons, including nuclear weapons.

Seeking to achieve the discontinuance of all test explosions of nuclear weapons for all time these nations determined to continue negotiations to this end.

1. Each of the Parties to this Treaty undertakes further-more to refrain from causing, encouraging, or in any way participating in, the carrying out of any nuclear weapon test explosion, or any other nuclear Explosion, anywhere which could take place in any of the environments described, or have the effect referred to, in a paragraph of this article.

2. Each of the parties of this Treaty undertakes to prohibit, to

prevent, and to carry out any nuclear weapons test explosion, or any other nuclear explosion, at any place under its jurisdiction or control.

(a) In the atmosphere beyond its limits, including outer spaces; or underwater, including territorial waters or high seas; or

(b) In any other environment if such an explosion causes radio as debris to be present outside the territorial limits of the state in. whose jurisdiction or control such an explosion is conducted. understood in this connection that the provisions of this subparagraph are without prejudice to the conclusion of a treaty resulting in the permanent banning of unclear 1cst explosions, including all Such explosions underground, the conçlusion of which, as the parties have stated in the Preamble to this Treaty, they seek to achieve.

3. Any party may propose amendments to this Treaty. The text of any proposed amendment shall be submitted to the Depositary Governments which shall circulate it to all Parties to this Treaty Therefore, it requested to do so by one-third or more of the Parties, the Depositary Governments shall convince a conference to which shall invite all the Parties, to consider such amendment.

4. Any amendment to this Treaty must be approved by a majority of the votes of all the Parties to this Treaty, including the voles of all of the Original Parties. The amendment shall enter. into force for all Parties upon the deposit of instruments of ratification by a majority of all parties including the instruments of ratification of all of the Original Parties.

1. This treaty shall be open to all States for signature.

2. This treaty shall be subject to ratification by signatory states. The instrument of ratification and instruments of accession shall be deposited with the Governments of the Original Parties-The United States o America, the United Kingdom of Great Britain and Northern Ireland, and the Union of Soviet Socialist Republics-which are designated (a5 the Depositary Governments).

4. The treaty shall enter, into force after its. ratification by all the Original Parties and the deposit ot, their instruments of ratification.

5. The Depositary Governments shall promptly inform all signatory

and acceding states ul the date of each signature, the date of deposit of each instrument of ratification or accession to this ‘Treaty, the date of its entry into force, and tho date of any requests for conferences or other notices.

6. This treaty shall be registered by the Depositary Government pursuant to Article 102 of the Chapter of the United Nations.

Duration- This treaty shall be of unlimited duration. Each party shall in exercising its national sovereignty have the right to withdraw from the Treaty if it decides that extraordinary events, related to the subject matter of this Treaty, have jeopardized the supreme interests of its country. It shall give notice of such withdrawal to all other Parties to the Treaty three months in advance.

(ii) Convinced that in furtherance of this principle, all parties to this treaty are entitled to participate in the fullest possible exchanges of scientific information to contribute alone or in co-operation with other states to the further development of the applications of atomic energy for peaceful purposes.

(iii) Declaring their intention that potential benefits from any peaceful applications of nuclear explosions should be available through appropriate international procedures to the non-nuclear-weapons state party to this treaty on a non-discriminatory basis and that the charge to such parties for the explosive devices used should be as low as possible and excluded any charge for research and development.

(iv) Declaring their intention to achieve at the earliest possible date the cessation of the nuclear arms race, urging the co-operation of all states in the attainment of this objective.

(v) Desiring to further the casing of international tension and the strengthening of trust between states in order to facilitate the cessation of the manufacture of nuclear weapons the liquidation of all their Existing stockpiles and the elimination from delivery pursuant to a treaty on general and complete disarmament under strict and effective international control.

Nothing in this treaty allects the right of any group oI states to conclude regional treaties in order to assure the total absence of nuclear weapons in their respective territories.

All parties to the treaty have agreed as follows-

1. Nothing in this treaty shall be interpreted as affecting the inalienable right of all the parties to the treaty to develop research, production, and use of nuclear energy for peaceful purposes without discrimination as well as the right of the parties to participate in the fullest possible exchange of information for, and to contribute alone or in co-operation with other states to the further development of the application of nuclear energy for peaceful purposes.

(b) Any amendment to this treaty must be approved by a majority of the votes of all the parțics to the treaty, including the voters of all nuclear-weapons states, a party to this treaty, and all other parties which on the debate the amendment is circulated, are members of the Board of Government of the International Atomic Energy Agency.

3. Five years after the entry 1nto force of this treaty a conference of parties to the treaty shall be held in Geneva, Switzerland, in order

to review the operation of this treaty with a view to assuring that the purposes and provisions of the treaty arc being realized.

4. (a) This treaty shall be open to all States for signature. Any state which docs does not sign the treaty before its entry into force in accordance with Paragraph C of this article any accede to it any time.

(c)The depositary governments shall promptly inform all signatory and acceding States of the date of each signature, the date of deposit of each instrument of ratification or accession, the date of the entry into force of this treaty, and date of receipt of any request for convening a conference or other notices.

(d) This treaty shall be registered by the depositary governments pursuant to Article 102 of the Charter of the United Nations.

6. This treaty shall be of unlimited duration.

Each party shall, in exercising its national sovereignty, have the right to the subject-matter of this treaty, have jeopardized the supreme interests of its country. It shall give notice of such withdrawal to all other parties to the treaty and to United Nations Security Council there months in advance. Such notice shall include a statement of the extraordinary events it regards as having jeopardized its supreme interests.

The Prospect of Nuclear Proliferation

The likelihood is that additional states will acquire nuclear, weapons write Prof. Osgood, and the probable consequences of their doing so present problems of analysis beyond the technological prediction of strictly military considerations. Thus it is clear that the next political incentive or disincentives for a state to build Nuclear Weapons has been as important in determining the number of nuclear powers as the technological and economic capacity of a state, since several nuclear states Canada, West Germany, Japan, 1taly, India, and Sweden-have at least as great a capability to acquire nuclear weapons as China.

In the next ten to fifteen years, says Prof. Osgood the spread of plutonium production for civilian energy will probable enable at least 2 dozen more states to build nuclear weapons with limited delivery capabilities if they should decide to make the effort, il all these states should rush into nuclear production as fast.

‘Instinctively, the United States and the Soviet Union oppose the spread of nuclear weapons, not only because they do not want competition, but also because they have become very sensitive to the dangers of nuclear and do not want the problem of keeping these dangers under control complicated by the addition of other. fingers on nuclear triggers. When faced with specific nuclear candidates in specific nuclear candidates in specific political situations, however, their general opposition to additional nuclear force may be overruled by calculations of the relative advantage and disadvantages of discouraging nuclear acquisition, passively accepting it, or even assisting it.

Securing genuine guarantees to non-nuclear states through the United Nations would be of no use because the Security Council cannot be expected to apply conventional force against a major aggressor. Among the major international competitors, there are no common interests, requiring the use of force that can be relied upon to take precedence over special national interests. Following the first Chinese atomic explosion, he announced in a national address on October 18, 1964, “The nations that do not seek national nuclear weapons, can Do sure that if they are strong support against some threat of nuclear black-mail then they will have it.”

In the above post, you learned about  BA LLB disarmament pdf

for students whenever you find any related question in your exam you can read the above post any time.