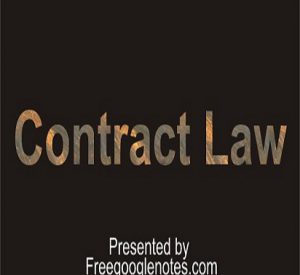 VERY SHORT ANSWER TYPE QUESTIONS
Q. 1. Define Agreement ?
Ans. “Agreement” is defined as “every promise and every set of
promises forming the consideration for each other. And a promise is
defined as an accepted proposal. Section 2 (b) says: “A proposal, when
accepted, becomes a promise.” This is another way of saying that an
agreement is an accepted proposal. The process of definitions comes
down to this:
A contract is an agreement; an agreement is a promise and a
promise is an accepted proposal. Thus every agreement, in its ultimate
analysis, is the result of a proposal from one side and its acceptance
by the other.
Q. 2. What is a contract ?
Ans. The term ‘contract’ is defined in Section 2 (h) of the Indian
Contract Act, 1872, as follows –

“An agreement enforced by law is a contract.”
Thus for the formation of a contract there must be –
(1) An agreement, and
(2) The agreement should be enforceable by law.
Q. 3. When can an offer be revoked ?
Ans. A offer or proposal is revoked-
1.By the communication of notice of revocation by the proposer
to the other party.
2. By the lapse of the time prescribed in such proposal for its
acceptance or, if no time is so prescribed, by the lapse of a reasonable
time, without communication of the acceptance.
3. By the failure of the acceptor to fulfill a condition precedent
to acceptance; or
4. By the death or insanity of the proposer , if the fact of his
death or insanity comes to the knowledge of the acceptor before
acceptance.

Q. 4. What do you mean by penalty and liquidated damages ?
Is there any difference between the two ?
Ans. The parties to a contract may provide that in case of breach
of contract the party in default is to pay to the other a sum certain
specified in, or ascertainable from, the contract. This may be either
liquidated damages or a penalty, which covers the loss. If the sum does
not attempt to assess the loss, but is imposed as security for the due
performance of the contract, it is a penalty.
The essence of a penalty is a payment of money stipulated as in
terorem of the offending party. Liquidated damage is a genuine
pre-estimate of the likely loss that may be suffered by a party due to
. a breach of contract S. 74 does away the distinction between penalty
and liquidated damages. The section lays down that the courts are not
bound, even in cases where the parties to a contract have in anticipation
of a breach, expressly determined by agreement what shall be the sum
payable as damages for the breach, to award such sum for a breach,
but may award for the same, reasonable compensation not exceeding
the amount mentioned in the contract.

Q. 6. What is the place of making a contract when offer and
acceptance are made on telephone ?
Ans. Acceptance and intimation of acceptance of offer are both
necessary to result in a binding contract. In the case of a contract which
consists of mutual promises, the offerer must receive intimation that
the offeree has accepted his offer and has signified his willingness to
perform his promise when parities are in the presence of each other
the method of communication will depend upon the nature of the offer
and the circumstances in which it is made.
When an offer is orally made, acceptance may be expected to
be made by an oral reply.
However the rule about instantaneous communications between
the parties is different from the rule about the post.
The contract is only complete, in the case of instantaneous
communications, when the acceptance is received by the offeror; and
the contract is made at the place where the acceptance is received.

Q. 7. When does a contract complete ?
Ans. The ‘general rule’ is that it is the acceptance of the offer
by the offeree and intimation of that acceptance to the offeror which
results in a contract. One of the exceptions to this general rule is that
when by agreement, course of conduct or usage of trade, acceptance
by the post or telegram is authorised, the bargain is struck and the
contract is complete when the acceptance is put into a course of
transmission by the offeree by posting a letter or dispatching a telegram.
But even in such a case, when the intimation of acceptance does
not reach the offeror it has to be shown that the letter or telegram of
acceptance was correctly addressed to the offeror, otherwise, it could
not, although posted or dispatched, be said to have been put in a course
of transmission to him.

Q. 8. When does an agreement become a contract ?
Ans. According to S. 2 (h) an agreement becomes a contract
only when it is enforceable by law. In other words, S. 10 says that an
agreement becomes a contract, if it is made by competent parties, by
the free consent of parties for a lawful consideration and for lawful
object and it must not have been expressly declared to be void by the
Contract Act or any other Act. Besides, any other legal requirement if
necessary, must also be satisfied.
Q. 9. What is the effect of conditional acceptance ?
Ans. According S. 7 in order to be a valid and binding contract
between the parties there must be an absolute and unconditional
acceptance of the terms of a proposal.
Unless there is an absolute and unqualified acceptance the stage
of a negotiation continues and no legal obligation comes into existence.
An acceptance with a variation is no acceptance at all, it is simply a
counter-proposal which must be accepted by the original proposer
before the contract is made.