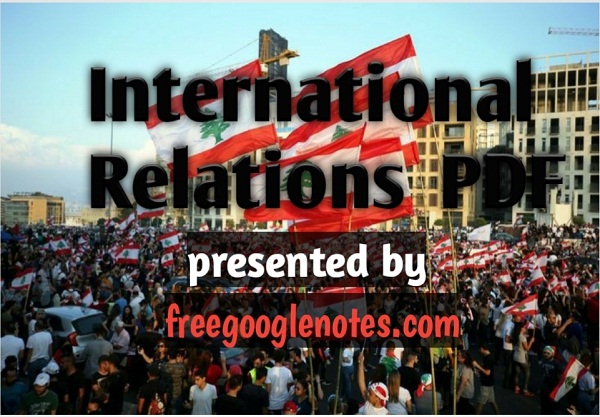 In the below post , you will learn international relations complete notes pdf  (BA LLB)

4. Hartmann. In the broader sense international relations include “all intercourse among slates and all movements of people, goods and ideas across national frontiers. However, as an field of study its focus is on the processes by which stales adjust their national interests to those of other states.”

5. Stanely Hoffmann. ‘The discipline of international relations is concerned with the factors and activities which affect the external  policies and the power of the basic units into which the world is divided.”

6. Trygve Mathiesen. International relations embrace “all kinds  of relations traversing state boundaries, no matter whether they are of an economic, legal, political or any other character, whether they be private or official”, and “all human behaviour originating on one side of state boundary and affecting human behaviour on the other side of the boundary.” While it cannot be denied that the relations conducted by the sovereign states are most important and the political relations tend to dominate this field of study, certain other important groups also influence the interactions of the sovereign states.