BA LLB 2nd semester economics notes pdf :Give a critical evaluation of the financial sector reforms in India in the post-1991 period 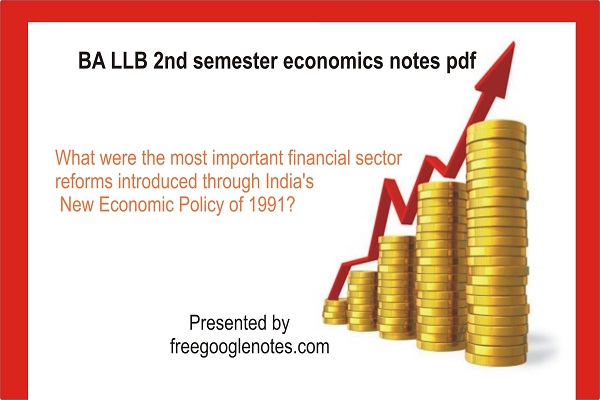 BA LLB 2nd semester economics notes pdf :Give a critical evaluation of the financial sector reforms in India in the post-1991 period

“India has had more than a decade of financial sector reforms during which there has been substantial transformation and liberalization of the whole financial system”.

Examine the statement and assess. the efficacy of the approach towards the reforms.

What were major financial sector reforms undertaken during the reform period?

What was the basic principle of financial sector reforms of 1991?

What are the major reforms of the financial sector?

What were the most important financial sector reforms introduced through India’s New Economic Policy of 1991?

As the economy grows and becomes more sophisticated, the banking sector has to develop in a manner that supports and stimulates such growth. With increasing global integration, the Îndian banking system and financial system has as a whole had to be strengthened so as to be able to complete. Now is the appropriate time to take stock and assess the efficacy of our approach. It is useful to evaluate how the financial system has performed in an objective quantitative manner.

Until the beginning of the 1990s, the state of the financial sector in India could be described as a classic example of “financial repression” a la MacKinnon and Shaw. The sector was characterized, inter alia, by administered interest rates, large pre-emption of resources by the authorities, and extensive micro-regulations directing the major portion of the flow of funds to and from financial intermediaries. While the true health of financial intermediaries, most of the public sector entities, was masked by relatively opaque accounting norms and limited disclosure, there were general concerns about their viability. Insurance companies- both life and non-life-were all publicly owned and offered very little product choice. There was very little transparency and depth in the secondary market trading of such securities. Interest rates on government securities, the predominant segment of fixed-income securities, were decided through administered fiat. The other major drawback of this regime was the scant attention that was placed on the financial health of the intermediaries.

The predominance of Government securities in the fixed income securities market of India mainly reflects the captive nature of this market as most financial intermediaries need to invest a sizeable portion of funds mobilized by them in such securities. The phase of nationalization and ‘social control’ of financial intermediaries, however, was not without considerable positive implications as well. The sharp increase in rural branches of banks increased deposit and savings growth considerably. There was a marked rise in credit flow towards economically important but hitherto neglected activities, most notably agriculture and small-scale industries.

Starting from such a position, it is widely recognized that the Indian financial sector over the last decade has been transformed into a reasonably sophisticated, diverse, and resilient system. However, this transformation has been the culmination of extensive well-sequenced, and coordinated policy measures aimed at making the Indian financial sector efficient, competitive, and stable.

The initiation of financial reforms in the country during the early 1990s was to a large extent conditioned by the analysis and recommendations of various committees/working groups set up to address specific issues. The process has been marked by ‘gradualism’ with measures being undertaken after extensive consultations with experts and market participants.

Reform measures introduced across sectors as well as within each sector were planned in such a way so as to reinforce each other. Attempts Were made to simultaneously strengthen commercial decision-making and market forces in an increasingly competitive framework. At the same time, the process did not lose sight of the social responsibilities of the financial sector. However, for fulfilling such objectives, rather than using administrative fiat or coercive, attempts were made to provide operational flexibility and incentives so that the desired ends are attended through the broad interplay of market forces.

Commercial banking constitutes the largest segment of the Indian financial system. Despite the general approach of the financial sector process to establish regulatory convergence among institutions involved in broadly similar activities, given the large systemic implications of the commercial banks, many of the regulatory and supervisory norms were initiated first for commercial banks and were late extended to other types of financial intermediaries.

After the nationalization of major banks in two waves, starting in 1969, the Indian banking system became predominantly government-owned by the early 1990s. Banking sector reform essentially consisted of a two-pronged approach. While nudging the Indian banking system to better health through the introduction of international best practices in prudential regulation and supervision early in the reform cycle, the idea was to increase competition in the system gradually.

Unlike in other emerging market countries, many of which had the presence of government-owned banks and financial institutions, banking reform has not involved large-scale privatization of such banks. The approach, instead first involved recapitalization of banks from government resources to bring them to appropriate capitalization standards. In the second phase, instead of privatization, an increase in capitalization has been done through diversification of ownership to private investors up to a limit of 49 percent, thereby keeping majority ownership and control with the government. With such widening of ownership, most of these banks have been publicly listed; this was designed to introduce greater market discipline in bank management and greater transparency through enhanced disclosure norms. The phased introduction of new private sector banks, the expansion in the number of foreign bank branches, provided for new competition.

Major reforms have been carried out in the government securities (G-Sec.) debt market: In fact, it is probably correct to say that a functioning G-Sec debt market was really initiated in the 1990s. The system had to essentially move from a strategy of pre-emption of recourse from banks at administered interest rates and through monetization to a more market-oriented system. Prescription of a “statutory liquidity ratio” (SLR), i.e., the ratio at which banks are required to invest in approved securities, though originally devised as a prudential measure, was used as the main instrument of pre-emption of bank resources in the pre-reform period. The high SLR requirement created a captive market for government securities, which were issued at low administered interest rates. After the initiation of reforms, this ratio has been reduced in phases to the statutory minimum level of 25%. Over the past few years, numerous steps have been taken to broaden and deepen the Government securities market and to raise the levels of transparency. Automatic monetization of the Government’s deficit has been phased out and the market borrowing of the Central Government is presently undertaken through a system of auctions at market-related rates.

The Indian approach to opening the external sector and developing the foreign exchange market in a phased manner from current account convertibility to the ongoing process of capital account opening is perhaps the most striking success relative to other emerging market economies. There have been no accidents in this process, the exchange rate has been market-determined and flexible and the process has been carefully calibrated. The capital account is effectively convertible for non-residents but has some way to go for residents. The Indian approach has perhaps gained greater international respectability after the enthusiasm for rapid Capital account opening has been dimmed since the Asian crisis.
Reforms in other segments of the Financial SectorMeasures aimed at establishing prudential regulation and supervision and also competition and efficiency-enhancing measures have also been introduced for non-bank financial intermediaries as well. Towards this end, non-banking financial companies (NBFCs), especially those involved in public deposit-taking activities, have been brought under the regulation of RBI. Development Finance Institutions (DFIs), specialized term-lending institutions, NBFCs, Urban Cooperative Banks, and Primary Dealers have all been brought under the supervision of the Board for Financial Supervision (BFS). With the aim of regulatory convergence for entities involved in similar activities, prudential regulation and supervision norms were also introduced in phases for DFIs, NBFCs, and cooperative banks.The insurance business remained within the confines of public ownership until the late 1990s. Subsequent to the passage of the Insurance Regulation and Development Act in 1999, several changes were initiated, including allowing newer players/joint ventures to undertake insurance business on a risk-sharing/commission basis.With the objective of improving market efficiency, increasing transparency, integration of national markets, and prevention of unfair practices regarding trading, the package of reforms comprising measures to liberalize, regulate and develop capital market was introduced. An important step has been the establishment of the Securities and Exchange Board of India (SEBI) as the regulator for equity markets. Since 1992, reform measures in the equity market have focused mainly on regulatory effectiveness, enhancing competitive conditions, reducing information asymmetries, developing modern technological infrastructure, mitigating transaction costs, and controlling speculation in the securities market. Another important development under the reform process has been the opening up of mutual funds to the private sector in 1992, which ended the monopoly of Unit Trust of India (UTI), a public sector entity. These steps have been buttressed by measures to promote market integrity.Reform in Monetary Policy FrameworkThe transition of economic policies in general, and financial sector policies in particular, from a control-oriented regime to a liberalized but regulated regime has also been reflected in changes in the nature of monetary management. While the basic objectives of monetary policy, namely price stability and ensuring adequate credit flow to support growth, have remained unchanged, the underlying operating environment for monetary policy has undergone a significant transformation. An increasing concern is the maintenance of financial stability. The basic emphasis of monetary policy since the initiation of reforms has been to reduce market segmentation in the financial sector through an increase in the linkage between various segments of the financial market including money, government securities, and the forex market.

The key policy development that has to enable a more independent monetary policy environment was the discontinuation of automatic monetization of the government’s fiscal deficit through an agreement between the Government and RBI in 1997. The enactment of the ‘Fiscal Responsibility and Budget Management Act’ has strengthened this further.