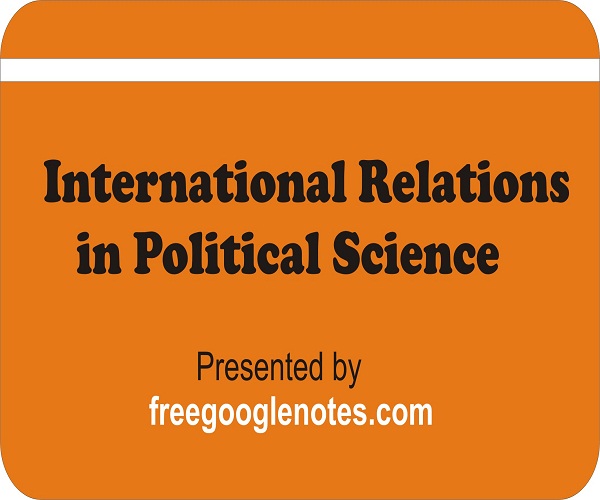 on Disarmament and the United Nations

Q.3. Discuss the role of the United Nations in Disarmament.

The First General Assembly also created the United Nations Atomic Energy Commission comprising of permanent members of the Security Council plus Canada. At the first meeting of the Commission, the US put forth the Baruch Plan (1946) for creating an International Atomic Development Authority.

On the other hand, the U.S.S.R. submitted a Draft Convention on Prohibition of Atomic Energy for the purpose of mass destruction. But each. of these proposals was rejected by the other party. The Soviet Union objected to the provision for inspection and for international Ownership and management of atomic energy:

The Sixth Assembly created the UN Disarmament Commission for regulation, limitation, and balanced reduction of all armed forces and for International Control of Atomic Energy for peaceful purposes. Thus, this Commission replaced the two previous Commission in 1952.

No success had been achieved between 1948 and 1952, as disarmament had become a hostage of the Cold War, which was in its coldest phase during this period.

But with the relaxation in the Cold War following the death of Stalın’ in 1953, came the Atom for peace proposal of Eisenhower. In the Ninth Assembly (1954) the Soviet Union agreed to consider the plan of disarmament. She agreed that reduction needs more precede inspection machinery. In 1955, the Open Skies Plan of mutual surveillance with ground observes was also considered. In the Eleventh

Assembly (1956), the question of the Nuclear Bomb Test dominated. The U.S. barred test suspension with International Inspection. In 1957, the Soviet Union proposed the enlargement of the Disarmament Commission by the addition to Egypt,

India Poland, and a Latin American country, and also proposed test suspension for two or three years. Again in the same years, it demanded a Disarmament Conference of all the 82 members. In 1959, came Khrushchev’s surprise and sensational proposal for a General and Complete Disarmament within four years and a Non-aggression Pact between the Warsaw Pact powers and the NATO countries.

The same years after the Camp David meeting, the two leaders, Khruschev and Eisenhower declared to solve the question of disarmament. Acçordingly, a Ten-Power Conference was convened in 1960 to resume negotiations. It consisted of five Western powers and five members of the Soviet bloc. A Summit meeting was also in the offering in 1960 at Paris.

But it could not take place because the whołe atmosphere was again vitiated by the U2 Plane Affair. In 1961, the Ten-Power Disarmament Conference was expanded to include 8 Non-aligned countries-Brazil, Burma, Ethiopia, India, Mexico, Nigeria, Sweden, and the U.A.R. Subsequently, its strength was raised to 31 and then to 38., Again in June 1996, its strength was raised to 61. most of the subsequent disarmament proposals are based on Drafts prepared by this body.

It is to be noted that by the late sixties the UN had run into a “stable stalemate” on the question of armament. The Great Powers discarded the goal of general disarmament and started arms control negotiations without the United Nations.

The following are some of the notable agreements regarding arms control and disarmament since 1960 onwards :

This awareness led to both the belief in the inevitability of peaceful co-existence. This spirit of accommodation was reflected in the conclusion of the Moscow,

Britain and the Soviet Union. But non-signatories were allowed to become parties to it by means of accession. The number of signatories has reached more than 180 now.

The Treaty has five articles. The Preamble acknowledges the fact that the nuclear test contaminates man’s environment by radioactivity Articles 1 prohibits every member to launch any nuclear test under its jurisdiction and control-atmosphere, outer space, and underwater or high seas. Underground tests, however, are not prohibited as their detection is difficult. This Treaty is of unlimited duration, but under Extraordinary events, one can withdraw under article lV of the Treaty.

Though it is a limited and partial test ban treaty, its significance lies in the fact that it was the first major step towards arms control and a breakthrough in the disarmament stalemate. It reduced the dangers of radioactive fallout by restricting the test of underground,

The Treaty was the first global agreement to protect the environment was partly intended to erode the growing opposition to nuclear weapon tests. But it provides no machinery to ensure the successful accomplishment of its objectives.

(4)-Tlatelolco Treaty (1967): It is a Latin American Nuclear Free Zone Agreement. But the US is yet to sign it.

The Treaty (NPT) aims at the prevention of multiplication of nuclear powers completed the process of ratification. The term of the Treaty was for 25 years with the 5-yearly review. The last review conference was held in New York in April-May 1995.

The Conference was attended by 175 countries who decided on its indefinite and unconditional extension. Now it has been signed by 178. nations. India, Pakistan, and Israel, which have nuclear capability, (Undeclared nuclear powers) are yet to accede to it.

The Treaty has 10 articles. It is full of flaws as it has no verification provision, and there is, no way of forcing the nuclear powers to observe their commitments. Further, it is the most ill-designed Treaty. It allows vertical, horizontal, and spatial proliferation. No doubt, this Treaty is biased in favor of the powers of the nuclcar weapon. it is an “undisguised

nuclear colonialism” or a “system or nuclear apartheid”. It is patently discriminatory and pronouncedly unequal.

India, as such, gives only conditional support to this unequal treaty. India’s objection is that there is no provision for nuclear powers to guarantee against a nuclear attack of non-nuclear states and no Commitment for reduction or destruction of existing nuclear weapons within a prescribed period. Further, it has now legitimized the possession of nuclear weapons in the hands of five countries in perpetuity.

It is to be noted that at the time of its indefinite extension (May 1995) the nuclear powers did not of further than Article VI of the NPT for any binding time-bound pledge in disarmament, Thus, their commitment to a systematic and progressive reduction of nuclear weapons globally which appears as a statement of principles appended to NPT is a weak substitute. Further, the declarations accompanying the NPT extension on comprehensive test ban treaty, fissile materials production cut off and reduction of weapons stock-piles are non-binding ones.

In the above post, you have learned about Disarmament and the United Nations
in
International Relations in Political Science
you can comment us your feedback below.
You can also like to read:-
How to start a youtube channel