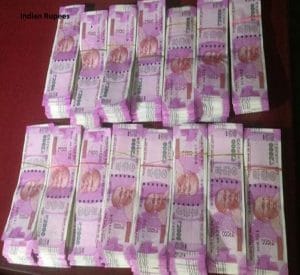 The rupee has dropped by 3% since January, sitting just shy of a record low
of Rs 77 levels against the US dollar.
Compare this to a cumulative fall
of 1.8% and 2.5% in 2021 and 2020,
respectively and the severity of the
recent decline becomes apparent.

What is the immediate cause?

Russia is a large contributor to the world’s energy production and the fear of a reduction in Russian supply due to sanctions from Nato allies has led to a sharp rise in commodity prices. Oil prices have already risen to a decadal high of $125/barrel from $80-85/barrel just two
months ago. Other commodities have also seen prices harden on the fears of supply shortages. India, a large commodity importer, is therefore facing the music.

How does the Ukraine-Russia conflict affect the rupee?

The nature of the Ukraine-Russia problem is one that is bipedal. One leg comes from the current account which is the balance between export and import flows.
The current rise in energy prices would raise India’s import bill. On the other hand, higher input costs would also hurt global growth and Indian exports.
This dual impact would result in increased pressure on India’s current account balance (CAB).

To finance this deficit that translates into a net demand for dollars, the capital account comes into play – the second leg of the problem. The capital account captures the net flow of dollars into India through foreign direct or portfolio investments, among other things. The Ukraine-Russia shock has led to the
emergence of the “safe haven” trade, where investors
rush towards low-risk assets like gold, US and Japanese
government bonds, and the dollar while selling out
from riskier assets like equities. Since January, foreign
investors have pulled out close to $11 billion from the
Indian equity market which is almost equivalent to the
total outflow seen during the financial crisis in 2008.
This double whammy of a higher current account
deficit and slower inflows into the capital account is
putting pressure on the rupee. In short, there are more
dollars leaving Indian shores through the current
account than are coming in as capital.
On balance, India could see a deficit of $18 billion in
the next fiscal year from about a surplus of $5 billion in
2021-22. The last time India saw a balance of payment(difference between the capital account and current account) deficit in 2018-19, the rupee had depreciated by almost 6% against the dollar.

What’s next for the rupee?

A continued escalation of the current crisis and furt-
her sanctions by the West could raise commodity prices
further. In this worst-case scenario, the possibility of
rupee making its way towards Rs 78/$cannot be ruled out,
However, unlike previous episodes of sharp rupee
depreciation (for instance in 2013, rupeefellby 13%), RBI’s
foreign exchange reserves are at a record high of $631
billion, providing it with enough ammo to sell dollars in
exchange of rupees if needed. It will raise the demand for
the latter, stabilising the currency. Currencies are like
any other asset, its price is influenced by supply and
demand. If recent history is to be taken as a norm, RBI has
shown an inclination to keep the currency range bound.
Moreover, imported inflationary risks could nudge the
central bank to intervene and safeguard the rupee
against any sustained sharp depreciation pressures.
When one looks beyond the near-term risks, a case
can be made for some further support for the rupee. For
one, the dollar is unlikely to be king forever. While it
continues to gain for now, benefiting from its position as
the global reserve currency, it should fall once geopoliti-
cal tensions ease. Second, high energy prices are likely
to hurt global growth, in turn reducing the demand for
commodities and eventually lowering their prices.
Finally, let’s not forget the LIC IPO which is estimated
to garner $8-10 billion investment, and the inclusion of
Indian bonds in the global bond index which could lead
to both a “sentiment” and direct effect on attracting
foreign inflows.

There is scope for the wind to change and become more favourable for the rupee in a couple of months. For now it might have to endure the storm.

Will Russia-Ukraine conflict is putting pressure on the currency